The World God Only Knows Review

When we first read the synopsis, we immediately knew that this was going to be one of the best series for the season.  Anything that involves a gamer that is so wholly devoted to his lifestyle being thrust into – GASP! – interacting with other human beings is bound to be an excellent show.  And boy were we happy when we weren’t disappointed at all when the first season aired. 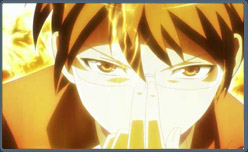 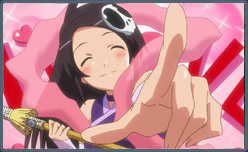 The World God Only Knows is about a gamer named Keima, who is so devoted to his dating sim games, that he is given the nickname “God of Conquests’.  Unfortunately, his reputation has transcended the realm of the living and has been noted by the higher-ups in Hell.  They send him a request for his assistance – something he takes as a challenge and blindly rushes into – and Keima soon finds himself entered into a demonic contract and given a partner to assist him in reclaiming the loose souls that have escaped Hell and housed themselves inside girls in his town.  His partner, the out-going and overall cheerful Elcie, explains the contract and tries her best to assist him as he goes forth into his mission.  As Keima interacts with these girls, he draws from his knowledge of dating sim games and is able to conquer four girls over the course of the show.  However, he is met with hardship and trials as he does so, although he mainly complains about his lack of time to spend playing video games and his ever-growing backlog of games.

First off, the plot was well-rounded and progressed at a very steady pace throughout the season.  There were a few filler episodes here and there, but they actually served a purpose, as they let us get an inside peek at Keima’s thought processes and Elcie’s past.  Every episode had something that made us cackle with glee, whether it was Keima getting beat up by a girl half his size or his interactions with Elcie.  Elcie’s way to integrate herself into Keima’s family (giving Keima’s mother a letter saying that she’s the illegitimate child of her husband’s secret lover) was hilarious, although endearing because Keima came to welcome and accept Elcie into his family.  There were small, endearing moments between Keima and Elcie, and even with the girls he conquered.

Once dazzled by the plot and how well they were able to flesh out the characters (despite the majority of them only having two to four episodes of screentime), you’re blown away by the animation.  The colors are incredibly vivid, showing the viewer how colorful the world Keima lives in really is.  But at the same time, you tend to feel sad for Keima because he’s so absorbed in his games that he doesn’t really take the time to look around him and notice the beautiful world he lives in.  The expressions of the characters ranged from comedic to serious to devastated and the animators somehow managed to make all of those scenes run from one to the next seamlessly.  Once you add in the voice actor’s talents, the world created becomes mesmerizing as everything unfolds in front of you.  Whoever did the casting, you deserve ten free internets.  You did an amazing job and I can’t imagine any of the characters with any other voice actors. 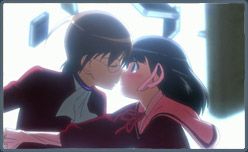 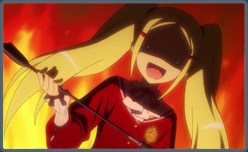 Unfortunately, the only downfall of the series is that a few of the girls Keima is conquering can become a bit grating after a little while.  Kanon in particular.  She was whiny, needy, and just overall irritating.  We still aren’t sure how Keima managed to put up with her, but we suppose the fact that she was conquered is the only thing that matters.  Once Kanon was out of the picture, we were thrilled to get away from her irritating need for constant validation, but were let down when we got the mousy librarian, Shiori.  Her rambling internal dialogue got a bit annoying, but nowhere near as annoying as Kanon was.  Needless to say, we were thankful when she was conquered by Keima and actually found her voice.  Other than those two characters, everyone else was extremely fun to watch and we actually developed a bit of a connection with them.  Overall, the characters were excellent, but with a few exceptions.

The soundtrack for the show was very well put together as well.  The music appropriately set the mood for the scene, whether it was a romantic moment between Keima and one of the girls he was conquering or a moment looking at Keima’s odd thought processes (complete with wacky scenarios).  The scores were well written and put together expertly well.  By far, their choice for music is one of our favorites of the season and in general. 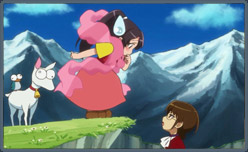 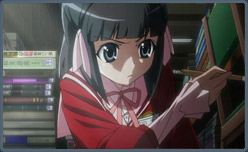 Although The World God Only Knows didn’t have a definite closing to it in the finale, we found out why right after the ending credits.  It had been cleared for a second season!  This made us extremely excited for the second season, set to begin airing in April 2011.  If you’re into gaming, or even just want a light-hearted, humorous series to balance out all of the bloody and serious shows you’re watching, we’d definitely recommend this show.  Plus, any show that’s cleared for a second season before the first season is over is always worth a look at the very least.  Give it a try and you won’t be disappointed in the least.