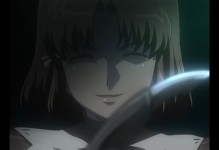 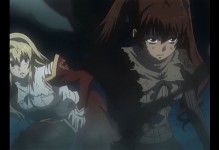 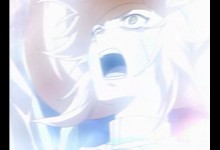 After waiting for over a week to see the finale of this show, I was not disappointed in the least.  They definitely used that extra time given to them to tweak the final episode and put more time into the animation and overall quality.  As a quick recap, Cathy and Bridgette are duking it out, with Cathy fighting the Nova’s control and begging Bridgette to kill her.  However, Cathy’s enlarged stigma on her chest begins glowing and it seems as though it’s about to explode.  While that is going on, Elizabeth is defeated by the enemy Pandora and the enemy manages to find the Holy Corpse.  This episode picks up right then, although before the enemy Pandora is able to do anything in regards to the Holy Corpse, Chiffon and her assistant – who’s name we finally learn! – Ticy appear, asking if they can talk it over.  Chiffon then summons her Volt Weapon, which is a rather nasty and brutal looking steel claw that’s five times the size of her arm, as does Ticy, and they launch an attack on the enemy Pandora.  However, while this is going on, Cathy’s stigma is about to explode, with Bridgette in the cross-hairs but suddenly Ganessa jumps in front of Bridgette!  The explosion goes off and Bridgette, who is knocked backwards by the force of the blast, looks up just in time to see Ganessa’s left arm be severed.  Bridgette manages to ask her why she jumped in front of the blast and Ganessa says that she’ll always protect her comrades, especially if they’re weaker than she is (of course, she’s harping on the fact that she’s currently ranked as the top of her class).

Arthur rushes forward to try and get Ganessa out of harm’s way, but when Ganessa doesn’t respond to anything he says (or even berate him for being an idiot like she always does) he falls to his knees and starts crying her name since he believes her to be dead.  Cathy takes this opportunity to launch another attack, although Bridgette takes the brunt of the attack, sending Cathy backwards.  Bridgette starts shaking, saying that she never thought she had friends – or comrades – at the academy so she doesn’t understand why she’s crying.  This causes her to snap – both mentally and emotionally – and somehow willingly enter Nova Mode on her own.  Once she snaps, Rana and Kazuya can only watch on in awe as she is able to parry all of Cathy’s attacks and even overpower her.  Bridgette becomes utterly brutal, ripping both of Cathy’s arms off and bashing the poor girl’s head into a wall repeatedly.  Once Cathy is on the ground and unable to move, Bridgette grasps her enlarged stigma and wrenches it from her chest, releasing Cathy from the Nova’s control.  Cathy begs Bridgette to kill her and just as Bridgette is about to kill her, Kazuya jumps into the fray – yet AGAIN – and grabs Bridgette around the waist, pleading with her to stop.  While this is going on, somewhere (I’m not sure where) two people are monitoring Bridgette’s stigma output.  When Kazuya grabs Bridgette and starts pleading with her, they notice that her stigma output begins decreasing and stabilizing.  It seems as though Kazuya’s words are getting through to Bridgette and calming her down. 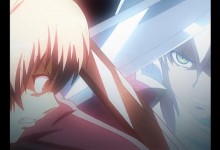 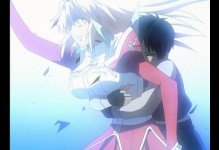 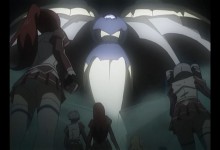 Once Bridgette manages to come to her senses, Cathy asks her why she didn’t kill her.  Bridgette simply responds that she wouldn’t be able to forgive herself if she killed a comrade.  At this moment, Ganessa begins coughing, alerting the group to the fact that she’s still alive.  Arthur picks her up gingerly and rushes out of the room towards the infirmary so that her wounds can be tended to.  Meanwhile, Chiffon and Ticy managed to defeat the enemy Pandora, but neglected to remove the enlarged stigma from her chest.  Outside, the last remaining Nova pauses in it’s attacks and disappears, stunning the Pandora forces outside.  Turns out, the stigma on the last remaining enemy Pandora that Chiffon has just defeated is serving as a beacon and the Nova is teleporting to the area that the Holy Corpse is in!  Bridgette and the remaining Pandora all rush into the room to try and defeat the Nova before it’s able to snatch the Holy Corpse and make off with it.  However, before they’re able to do anything, the stigma Bridgette had ripped from Cathy’s chest begins to pulse and some weird veins begin creeping up her arm.  Kazuya turns around when she starts screaming; it turns out that the Nova is using the stigma she took from Cathy to take over Bridgette’s body.  The mysterious people monitoring her stigma output comment on the fact that the Nova seemed to gather that Bridgette is one of the more powerful Pandora in the room and is trying to utilize her power to keep the other girls distracted while it grabs the Holy Corpse.

Once Bridgette is fully consumed by the stigma and Nova’s control, she unleashes a Freezing, halting the girl’s progress.  The upperclassmen utilize their Pandora Mode (something that shocks Rana since she doesn’t know about it), but Bridgette intensifies her Freezing and the girls are brought to their knees, their Pandora Mode nullified.  While the girls struggle to regain control, the Nova begins attacking the wall housing the Holy Corpse.  However, somewhere (I’d imagine in Bridgette’s subconscious) she’s pleading for someone to help her and even tries calling out to Kazuya.  Suddenly, a bright light envelopes Bridgette and we see Kazuha and she encourages Bridgette to protect those she loves and promises to give her the power to do so.  Just as Bridgette embraces Kazuha, the stigma on her chest cracks and shatters, leaving her in control of her body once again.  As her Freezing wears off, Kazuya fires off one of his own, halting the Nova’s progress as the girls launch a final attack on it, defeating it once and for all.  Afterwards, Bridgette tells Kazuya that she’ll perform the Baptism with him and Chiffon giggles and murmurs something because Bridgette’s outfit is completely destroyed and Kazuya ends up getting a nosebleed.

A few days later, after everything returns to normal, Cathy and her senpai return to West Genetics and Cathy tells her that she’ll be joining one of the brigades as a Pandora.  After they leave, we see a few moments of things returning to normal.  Kazuya and Rana visit Ganessa in the hospital only to find out that Bridgette was getting ready to leave after bringing Ganessa a large pot of flowers.  Ganessa comments on how much Bridgette has changed as the girl in question is leaving (she pauses to tell Kazuya to come to her room after he’s done visiting Ganessa).  Afterwards, Kazuya bumps into Rana in the hallway of the dorms and Rana brings Kazuya to Bridgette’s room, only to find Bridgette in her undies on the floor, in a very provocative pose.  Angry, Rana throws her uniform off, trying to tempt Kazuya and even going as far to say she’s more shameless than Bridgette.  Not to be outdone, Bridgette throws her bra off, leaving Kazuya in a very awkward position.  However, the last thing we see for the series are the two mysterious figures who were monitoring Bridgette throughout their battle conversing.  The woman comments on how it was a good idea to “let her mature” and the man – who turns out to be Kazuya’s father – agrees, saying that it’s only the beginning. 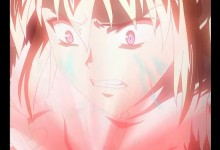 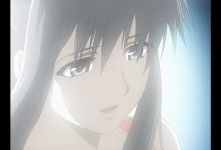 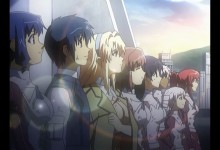 Opinions: For a series finale, I wasn’t disappointed in the least.  The action was amazing (especially when Bridgette went berserk in her fight against Cathy) and overall, they managed to wrap things up rather nicely.  However, what Kazuya’s father said about it only being the beginning has me a bit worried, but also curious.  Does this mean that there’s going to be a second season?  Or is he just alluding to the fact that Nova will continue to try and retrieve the Holy Corpse?  Either way, it left us with a bit of confusion and doubt about the fate of our heros.  And the fact that Rana is still not giving up on Kazuya was amusing, but at the same time, I’d really like to see Bridgette and Kazuya perform the Baptism.  While on the subject of Rana, I have to admit I was a bit disappointed in her lack of involvement in the final battle.  She seemed like such a badass fighter, but she wasn’t given any love in this final battle!  Aside from some small things I would have liked to be different, overall, it was a great finale for a great show.