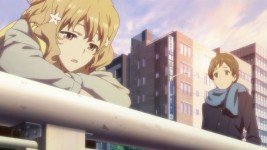 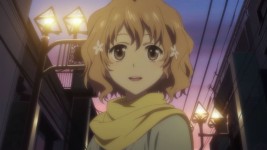 When I first read the synopsis for Hanasaku Iroha, I was intrigued.  Not because it promised tons of action, fanservice or any other possible bait animators will use to  lure people into watching their show.  I was intrigued because it genuinely seemed like a good story.  Hanasaku Iroha is the story of a young high school girl named Ohana who leaves Tokyo to live at her grandmother’s hot spring resort called Kissuisō.  What Ohana doesn’t expect is that she’s to become one of the employees while working there.

As the episode starts, we see Ohana preparing breakfast for herself and her mother, who is busy working on her novel, when she suddenly stops and informs her mother that she’s not really her child, but is the illegitimate offspring of some well-to-do woman that her mother just adopted.  Her mom laughs and tells her that’s impossible.  Ohana sighs, but agrees, saying it was fun to imagine it, before continuing with her preparations.  Just then, the phone rings and Ohana’s mom begs her to get it while hiding behind her laptop screen, afraid that it’s a deadline reminder from her editor.  Ohana answers the phone, but finds out that it’s her mother’s boyfriend instead of her editor; when she says who it is, her mother jumps up and snatches the phone from her.  Ohana sighs, but continues getting ready for school.  Later that day at school, she’s having lunch with her best friend Ko and he scolds her for being silly and trying to get to the corn at the bottom of her drink.  He tells her to floor it with water and drink it like that; Ohana is annoyed with that because “it would ruin the flavor” so Ko suggests filling it with water, pouring it into a bowl and using chopsticks to pick out the kernels and eat them.  Ohana is shocked and tells Ko she never thought that he would be so patient to think that through.  Her comment embarrasses Ko, but he doesn’t say anything.

After school, Ohana and Ko are walking home when Ko asks if she’s thought about what she wants to do once they graduate.  Ohana says she isn’t sure, but plans on getting married by age 26 and having children, a steady job and buying a plot of land at the local graveyard’s 3rd block (Ko is surprised by this and says that it’ll cost a lot of money but Ohana ignores his comment).  She then goes on to say that she’s tired of living in Tokyo and wants to go on an adventure after school, although she’s not sure where.  Before Ko can say anything else, Ohana runs across the street just as the cross-walk is blinking red and waves goodbye to her friend.  When Ohana arrives at home, she’s surprised to see a ton of boxes packed and her mother and boyfriend sitting at the kitchen table.  When she asks what’s going on, they tell her that they’re running away because her mom’s boyfriend got into some massive debt and is in trouble.  Ohana seems excited and asks where they’re going, but her mom laughs, telling her that there’s no way she’d take her teenage daughter with her when she’s on the run (Ohana says that she’s not normal to not take her child with her when she’s on the run).  Turns out, Ohana is heading to her grandmother’s hot spring inn to finish school while her mother is on the run. 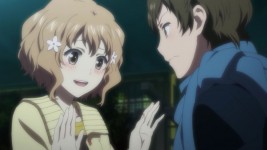 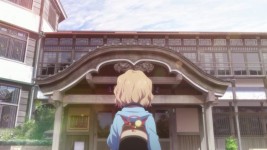 After finding out about this, Ohana heads to Ko’s after school job to tell him the news.  As she does so, Ko becomes increasingly upset about it before finally confessing his affections for her.  This surprises Ohana and she isn’t sure what to say, so Ko takes it as a rejection and runs away, telling her that he hopes she enjoys her long-awaited adventure.  The next day on the train, Ohana is upset that Ko didn’t bother coming to the train station to see her off, but is soon forgetting her grief when she sees the scenery surrounding the mountains that she’ll be living near.  As she gets off of the train and heads through the small town, she becomes increasingly excited to see her grandmother (whom she’s never met before) and see where she’ll be staying.  She soon finds the inn and is shocked at how large it is, but notices something that appears to be weeds growing in the grass.  Angry that it’s ruining her fairytale moment, she begins pulling them, but is soon confronted by a girl that looks to be the same age as Ohana.  She tells Ohana to go die, but another maid runs out, separating them.  She explains that the girl had been growing a rare kind of scallion and Ohana had just pulled up about half of them.  Ohana tries to apologize, but the girl just glares at her before storming off.  Suddenly, someone calls Ohana’s name from a window above and Ohana looks up to see her grandmother.  However, before she’s able to say anything to her, her grandmother tosses a bucket and cloth to her.  Not exactly the welcoming one would expect from their grandmother…

Turns out, Ohana’s grandmother expects her to earn her keep by helping out around the inn before and after school and on the weekends.  She goes on to say that she’ll be paid and that she doesn’t care what she does after she graduates, but so long as she’s under her roof, she’ll be working.  Ohana is shocked by this, but tries to go with the flow, and starts out by cleaning the patio.  However, while she’s scrubbing the wooden floors, someone trips over her and it turns out it’s her mother’s estranged brother.  He recognizes her instantly and begins teasing her, making Ohana upset since she had done nothing to warrant that treatment.  Right after he leaves, she’s grabbed by one of the head maids, Tomoe, and is given a tour of the establishment.  Although Tomoe means well, she seems to be a bit of a gossip, asking Ohana for all sorts of information about her estranged family.  Here, she sees the two girls we met earlier, Minko (the girl who told Ohana to die) and Nako.  Tomoe passes Ohana off to them for the remainder of her tour as she’s been called to assist some of the guests.  However, Minko wants nothing to do with the tour and excuses herself, leaving timid Nako to give Ohana the tour.  Afterwards, Ohana is passing by the kitchen and sees Minko getting scolded by her senior chef (apparently she’s an apprentice) and tries to tell him that he’s being too hard on her.  She gets scolded herself and Minko tells her to mind her own business.

Ohana heads to the room she shares with Minko feeling dejected and receives a text message from her mother saying “good luck!” and she seems depressed that Ko hasn’t contacted her at all.  She falls asleep before Minko returns to their room and awakens after Minko has already headed to the kitchen for work.  Worried about how well Minko is sleeping, Ohana decides to hand out her futon, but is distracted by her estranged uncle and loses her grip on the futon.  It falls out of the window and onto two guests.  We then see Ohana and her grandmother bowing before the couple apologizing profusely, although the couple tells them it’s not a big deal.  Ohana is then instructed to follow her grandmother to her office while Tomoe is sent to fetch Minko.  Ohana is scolded for her actions until Tomoe returns with Minko.  Ohana’s grandmother asks Minko to come forward and slaps her silly, telling her that because of her futon, two customers had been inconvenienced.  Ohana is upset about this and asks her grandmother to slap her since it was her fault.  Her grandmother obliges her and despite her bloody nose, Ohana thanks her for not taking out her anger on Minko anymore.  Afterwards, when Minko and Ohana are tending to their cheeks, Ohana tries patching things up with Minko, but she’s told to go die again.  Discouraged, Ohana returns to her chores and tries to hide the fact that she’s devastated that her adventure hasn’t turned out the way she expected it to. 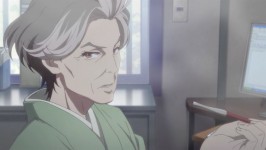 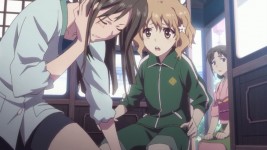 Opinions: For a slice of life genre, this is turning out to be really good.  Certain aspects are cliched, but the way the animators and script writers went about writing it has given it a new breath of life, which I really enjoyed.  The animation is high quality and pretty to look at and the voice acting is spot on.  I hated how Ohana’s mother just up and left her like that and how cruel her grandmother seems (I have a feeling she secretly has a soft, gooey center though).  The confession scene with Ko was heart-wrenching, yet Ohana’s confusion and shock was able to get across to the viewer, as well as Ko’s desperation and sadness.  Overall, it was a wonderful episode and I expect that it will only get better as the series goes on.