Despite my rather obvious disdain for this filler arc, I will say that this episode pleasantly surprised me. I was expecting more of the rather same stupidity from the first episode of the arc to continue, but we got some great character moments and some good original Anime content that’s quite impressive. Of course, there are still some rather glaring flaws…

First and foremost, I really am starting to find Daphine to not only be exceedingly annoying, but exceedingly weak as a character. Her motivations are a joke, as she wants to create an artificial dragon just because… she wants to make a Perfect Artificial Dragon? The whole logic baffles the mind. At the end of the day, one just finds that Daphine doesn’t really have much of a reason to do what she’s doing other than she’s just a mad scientist. Its this kind of lack of thought in filler arcs, that pisses me off.

Sure, I want Daphine to be put down, as fast as possible, but not because I detest her as a villain, but rather that she just annoys the hell out of me. Her “Hai hai” stuff is the stuff of Annoyance Legend (Hercule from DBZ may have a new partner in crime).

Weak villain aside, we actually got some decent info behind Gray’s actions. Its fairly obvious that he did what he did for the Residents of the City with no Sound. I’m guessing since Natsu promised that he would take down the Dragonoid, only him taking it down will help the residents of the City with no Sound. It makes sense that Gray would play the villain, but at the same time, he could’ve just collaborated with Natsu to begin with instead of go about it in this roundabout way. I honestly don’t see Gray deciding to suddenly play the bad guy in canon, because the character just isn’t that sort of character.

I did like how Gray manned up for what he had done, and didn’t present any excuses, going as far as being ready to take the worst punishment Makarov could give him, which might have been exile from Fairy Tail. Still, as I said before, it hardly makes  sense for Gray to put so much on the line for the City of Sound, unless there’s another reason. If there’s another reason that runs even deeper, then I might accept this, something that pissed off Gray at the fact that Natsu forgot his promise to the Residents of the City with No Sound.

Beyond just Gray though, this episode and even this arc ceased to be useless when they added those extra scenes with all the Fairy Tail members as they all recalled just how much Natsu has helped them all. It really is amazing how much Natsu has bailed out everyone, and helped them when they’re down (both emotionally and physically). Nearly every character in Fairy Tail owes Natsu in some way or the other, and it was quite awesome seeing them all remember that.

I particularly enjoyed the scene with Elfman and Natsu at Lisanna’s grave: 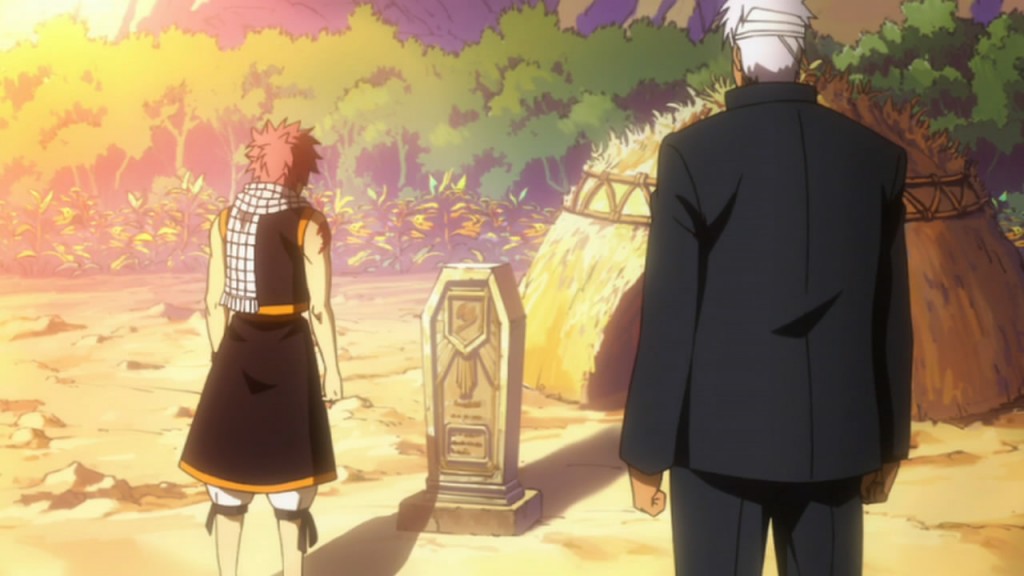 If you keep Cryin, it ain’t gonna make Lisanna Smile will it?

The scene with Natsu and Elfman was pretty heartwarming. It was easy to imagine Natsu would be filled with sadness and rage at Lisanna’s death, but the composure that he had with Elfman and the way he remembered the best things about her, is what makes him a really amazing Hero and a great person. He also, by extention healed Mirajane’s mental wounds as well, who was close by hearing their conversation. Great and epic stuff, fitted in nicely into a place where I least expected it.

This arc also gives the other wizards of Fairy Tail a chance to shine, given how Natsu, Erza, Gray and Lucy generally are the only people to take the center stage most of the time.

I have to say, Natsu continues to be badass, at least the fillers got that right. This scene was a very powerful moment: 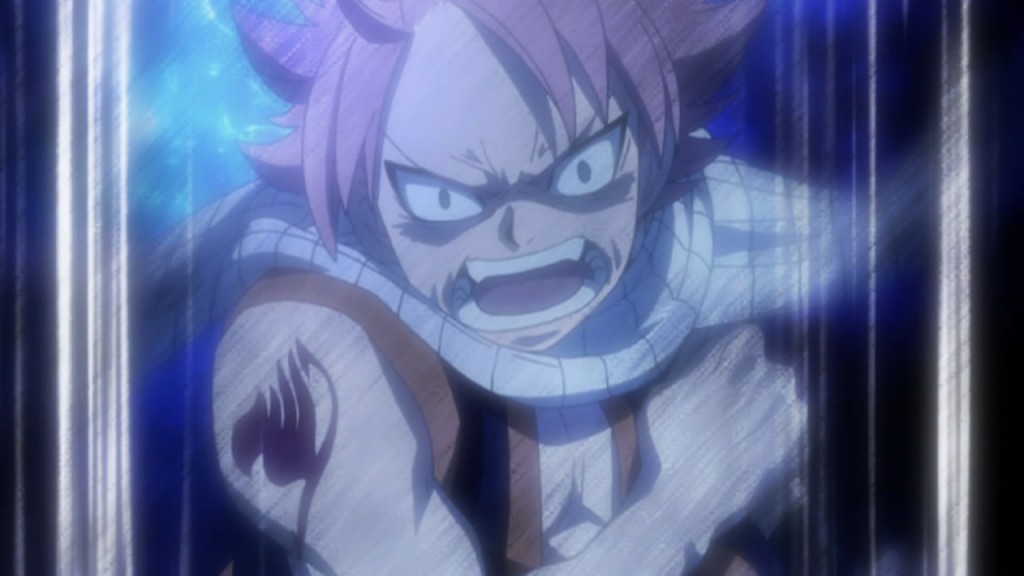 Break Down that thing along with me!

The fact that Natsu would urge everyone to take out the Dragonoid, was a typical thing for a hero to say, but it nonetheless was pretty badass and very Natsu-like!

I wasn’t expecting a lot from this arc after the first episode, and I still can’t stand some of the original ideas behind it, but Fairy Tail still managed to win me over  with the awesome character moments in this episode. I’m not really interested in Daphine or her being taken down, as that’s inevitable, but if we keep getting some awesome character moments, it might not be such a bad arc after all.

More info from Gray on his actions as Erza and the rest take down the Dragonoid. All of that and probably more next week!