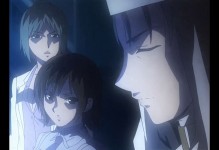 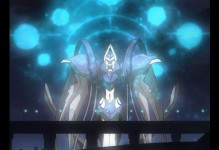 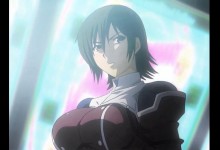 It seems as though the animators won’t be letting up the throttle anytime soon and that revelation makes me giggle like a little school girl.  As a quick recap, East Genetics was attacked by not one, but four Novas, which somehow managed to absorb the Pandora’s defenses at the East.  While that was going on, West Genetics was on high alert, sending reinforcements to East Genetics.  However, things appear to turn for the worst.  Before they can recall their troops, the Novas somehow manage to travel from the eastern academy to the western one in the span of roughly ten minutes, shocking everyone.  Sister Margaret becomes aware that the Nova appear to be searching for something; the longest time they stayed in the human dimension was five hours and thirty-seven minutes.  After that time period was up, they blew themselves up – taking a large chunk of the surrounding city with them – as a way to make that area as “fully searched.”  Sister Margaret seems worried about whatever it is the Novas are searching for, which really creates a sense of dread for the viewer.

While the teachers try to figure out what to do in order to keep the school safe, Bridgette, Rana and Kazuya are summoned for a debriefing in which they are informed that all third and fourth year students are to prepare for battle while all first and second years are to remain on stand-by.  Bridgette isn’t pleased with this because she wants to fight, but Kazuya catches up to her as she tries making her way to the front lines.  He tries to reason with her, but before she can confront him about his sister, Rana shows up.  She grabs Kazuya, saying that if Bridgette wants to go against orders that’s fine with her, but she and Kazuya will be partners for the time being.  Of course, this pissed Bridgette off and just as the two summon their Volt weapons, Kazuya throws himself between them.  He scolds them, saying that this isn’t the time to be fighting with each other since it’s a state of emergency.  He goes on to say that his sister always told him Pandora existed to protect others and not to simply fight against each other.  Bridgette and Rana realize that he’s right, although Bridgette is still visibly upset about what Kazuya said about his sister.  Unfortunately, she doesn’t have much time to dwell on her emotions since the third and fourth years are in the process of being deployed to the front lines. 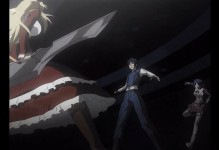 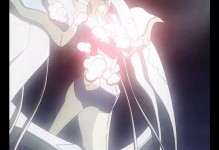 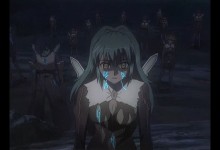 Once there, we see the troops getting into their positions and preparing to attack the Nova.  However, before they are able to attack, the Nova’s body appears to swell (I initially thought that it would self-detonate and take out everything in a five mile radius) and just as we think they’re about to explode, the Pandora that it absorbed at East Genetics are tossed onto the ground.  Everyone is relieved for a moment until the Pandora stand up and a strange diamond shaped object appears on their chests.  Somehow, the Nova were able to fuse with the Pandora and control them!  The force’s attention is quickly changed from defeating the Nova to defeating the enemy Pandora, but the enemy quickly defeats them and speeds off towards the school.  While all of this is going on, Sister Margaret is watching from the command center and became rather worried about this development.  She tries to keep her emotions in check and reassure everyone in the command room that the forces behind the eastern gate will be able to stop them.  However, she internally admits that she knows exactly what they’re after and must put a stop to it.

While all of this is going on, Bridgette and Rana are still glaring daggers at each other when Kazuya’s radio starts blaring, informing that Rana, Bridgette, Ganessa, Arthur and himself are to report to Ravensborne Nuchleochede immediately.  As they make their way there, we get a brief look at the eastern gate where several of the higher-ranking third years are standing guard.  The enemy Pandoras make contact and easily defeat them before moving on towards Ravensborne.  Meanwhile, Sister Margarete meets up with Bridgette and company and explains that there is something of utmost importance that they need to keep from landing in the hands of the enemy.  The group doesn’t say much, but follows her down the elevator to a large, barricaded room.  Sister Margarete ducks inside while the others remain as guards.  Here, we find out that the school is harboring the corpse of the first Pandora – and the source of their power – Maria Lancelot.  Apparently they have been taking tissue samples from Maria’s corpse and implanting them into future Pandoras.  However, it turns out that Pandoras are born by combining Nova and human tissues, which means that Pandoras could turn into the Nova form (what the girls from East Genetics are currently in) at any time.  According to Sister Margarete, this is what happened during the 8th Clash when Aoi Kazuha sacrificed herself to save her comrades.  As shocking as this information is, we’re torn away from learning more by the enemy Pandora who have managed to breach the school’s highest security and are now on their way to meet their target: the Holy Corpse. 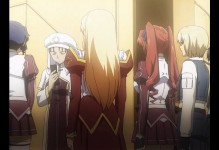 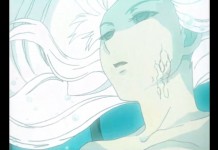 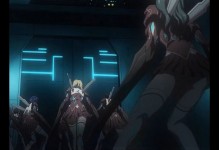 Opinions: This episode had me on the edge of my seat the entire time I was watching it.  Between learning the truth about the Pandoras and their powers and seeing what happened to the girls from East Genetics, this episode really slapped me in the face with a massive dose of epic.  From the looks of things, we’re on the right track for a rather epic final battle, but I’d also like to hear more about the origin of the Pandora.  If Maria was mass-producing stigma in her body, there had to have been a way for them to obtain the Nova’s DNA to produce it in the first place.  I have a feeling that the next two episodes will be action-packed, yet answer a lot of the questions we have.