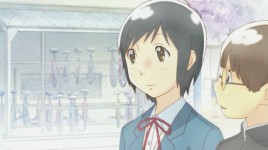 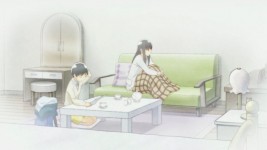 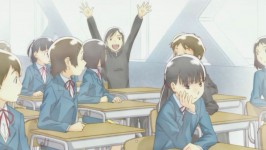 With the series about two-thirds of the way over, we begin to get down to the finer details of what makes our characters tick.  In this episode, we have a bit of a time jump; it’s the beginning of the new semester and the gang is figuring out who is in what class and whether or not they have a friend with them.  To Sasa’s disappointment, everyone is split up, although it appears that a couple of them have the same class.  However, the one thing that managed to grab my attention was the fact that Takatsuki grew her hair out over the summer vacation.  Apparently when she and Saori were attempting to patch up their friendship, Saori admitted that she liked Takatsuki’s hair long and wished she would grow it back out.  Takatsuki seems to have taken her friend’s request to heart and has done just that.  Once everyone is off to class, we find out that Shūichi has the same homeroom teacher, although he’s in the same class as a bully from elementary school.  During attendance, the boy makes fun of how Shūichi responds to roll-call which visibly annoys Shūichi.  Unfortunately, Shūichi isn’t the only one dealing with an annoyance during class; it turns out that Saori has Chizuru in her class and not only did Chizuru wear her boy’s uniform to school again, but she’s constantly calling Saori’s name from the back of the classroom.

After school, Shūichi meets up with Anna for a date in which they go shopping.  Shūichi helps Anna pick out an outfit and seems drawn to the cute clothing in the stores.  Later on, Anna mentions that he’s so serious when shopping for clothes, but Shūichi doesn’t want to admit that it’s because he likes dressing up as a girl.  However, Anna mentions it to Maho at their next photo shoot, which irritates her.  When she arrives home, she storms into the bathroom to yell at Shūichi.  She tells him that if he’s going to date Anna, he’s not allowed to dress like a girl anymore.  Shūichi says he hasn’t done that in awhile, but Maho tells him that he can’t do it ever again because Anna is normal, unlike him.  This upsets Shūichi, but he doesn’t say anything as his sisters storms out of the room.  Later that week, Shūichi meets with Yuki after school to discuss his problems about wanting to cross-dress, but not wanting to make Anna uncomfortable or think that he’s weird.  Yuki tells him that he should just tell Anna how he feels about it since she seems to be fairly open to the idea.  Relieved, Shūichi parts from Yuki, although the bully from his class sees him leaving the cafe with Yuki. 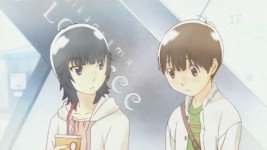 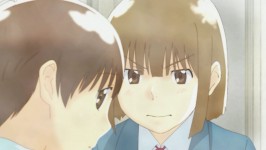 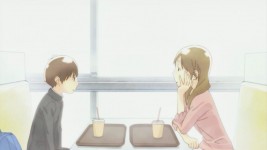 The next day, the boy who saw Shūichi and Yuki leaving the cafe confronts him, asking who “the hot chick” was.  Panicking, Shūichi says that she’s just a friend, but after seeing the look on the boy’s face decides that he should have said she was a relative instead.  To his surprise, the boy grabs his hand, saying that he wants to be friends and apologizes for being such a jerk to him before.  After school, Shūichi, Makoto and two boys (including the one who said he wants to be friends with Shūichi) are walking home, although Makoto has a feeling that the other two boys just want something from them.  Shūichi remains silent, but feels uneasy about the whole situation.  Meanwhile, Takatsuki, Saori and Sasa meet up with the other girls to walk home and are surprised that Shūichi and Makoto are absent.  That weekend, Anna and Shūichi are on another date when Shūichi admits that he still wants to dress like a girl.  Anna laughs, saying that if it means that much to him, he should dress as a girl for their next date.  Shūichi is surprised that she’s so open to the idea, especially after what Maho said, but is happy to hear Anna isn’t angry with him.

A few days later, Shūichi is at Anna’s house getting ready for their date when he surprises her by asking if she wants to kiss him.  Anna asks Shūichi if he wants to kiss her, but he admits that he’s not sure.  Neither of them speak of the subject again, but I have a feeling it will come up again at a later time.  While out at lunch, Shūichi and Anna run into Takatsuki and Saori – who are out shopping – and invite them to karaoke with them.  Saori and Takatsuki are a bit uncomfortable, but Anna surprises Takatsuki by saying that she thinks Takatsuki should join her modeling company since she has the look for it.  Saori is so upset about seeing Shūichi on a date with Anna – in drag no less – and the truth finally comes out.  She admits that she was in love with Shūichi, but has moved on.  She then begins singing, shocking everyone at how good she is.  At the end of the day, Anna exchanges phone numbers with everyone, saying that they should hang out again soon.  Takatsuki and Shūichi seem happy that they are able to be friends again without the strain they experienced earlier now that Anna wants to be friends with Takatsuki, although we don’t know how Saori feels about it all. 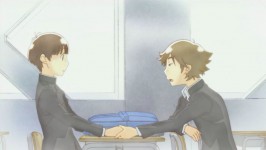 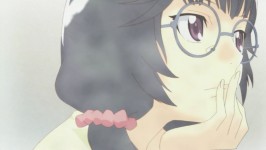 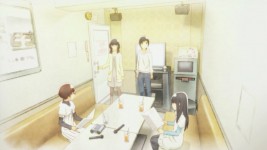 Opinions: Another good episode!  It seems like this show will consistently advance the plot-line while still paying attention to the characters and what is troubling them as they deal with everything.  Anna surprised me by being so open to Shūichi cross-dressing, even while they were on dates, especially after what Maho said.  I have to admit, Maho is really starting to get on my nerves.  I get that she thinks her brother is weird for cross-dressing and that she’s the older sibling, but c’mon!  Give the kid a break and quit being such a bitch! D<  Maho aside, I’m really curious to find out what happens between Shūichi, Anna and Takatsuki and if Saori or Makoto will enter the picture again.  And what does that bully want from Shūichi?