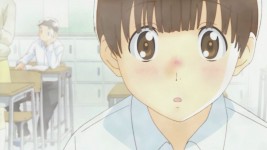 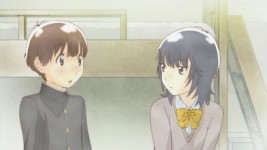 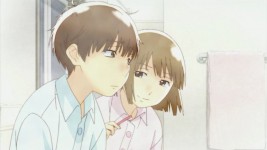 Now that the play is over, things seem to settle down into a fairly normal rhythm for everyone…except Shūichi.  The episode starts off with Shūichi reading a passage about the changes one will experience during puberty aloud to the class, causing a couple of girls to giggle.  Their teacher asks them what’s so funny and when they say that it sounds like Shūichi is talking about himself, he then asks someone else to take over the reading.  When Shūichi sits down, he notices a few of the girls are still giggling and he realizes that he has a pimple forming on his nose.  As I’m sure everyone has done when they got their first pimple, he panics and worries that it’ll become worse as he gets older.  Later that day, Shūichi and Makoto stop by a convenience store to pick up a magazine in order to get tips for treating acne.  They realize that Anna is on the cover of the magazine and Shūichi seems to be a bit flustered about this.  When he returns home, Shūichi intends to hide out in his room until later that night when he can ask his sister for advice, but instead finds Anna sitting in his room.  Embarrassed, he tries to hide it, although Anna doesn’t really notice anything.  He then comments on how beautiful her skin in and how he wishes his was more like hers.  She asks why he thinks that and he shyly admits that he has a pimple; Anna asks him where and he says it’s on his nose.  He then says that he’s worried it won’t go away and will only get worse because that’s what Maho told him.  Anna says that it was mean of her to say that and instead gives him some tips on how to treat it.

The  next morning, Shūichi is horrified to find that not only did his pimple not go away, but he has another one on his chin.  Maho seems to be delighted by this development and proceeds to tease him about it.  At school, Makoto asks Shūichi why he doesn’t just ask his sister for advice on how to treat it, but Shūichi says he’d rather not ask her.  Instead, he decides to get Anna’s phone number from his sister to get her advice.  Maho gives him Anna’s number, but tells him that he can’t call her in the morning, afternoon or evening, so the only time he can really call her is in the early evening.  Shūichi takes this to heart and calls Anna later that evening and she takes him shopping for some skin care products.  When he apologizes for calling her so early in the afternoon, she becomes puzzled so Shūichi explains what Maho told him; Anna says that he can call her whenever he needs to, within reason.  Shūichi is happy to hear this, but also seems a bit annoyed that his sister has been tricking him all this time.  Meanwhile, Takatsuki and Saori bump into each other and Takatsuki congratulates Soari on being recruited by the drama club, along with Shūichi.  Saori says that she hasn’t done anything amazing and that Takatsuki is really the amazing one because she’s able to be happy for someone even though they got something that she wanted.  She then goes on to say that that’s the reason why she hates Takatsuki so much and exits the room, leaving Takatsuki stunned. 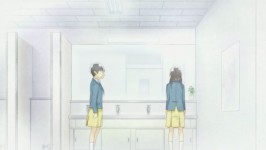 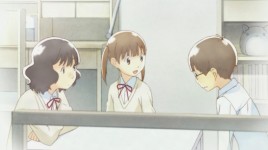 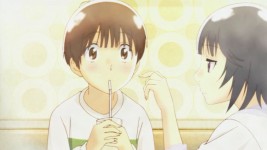 At school the next day, Makoto and Shūichi are talking about how Shūichi was able to ask Anna out and Shūichi tells him that they initially went to the karaoke place Anna frequents.  Anna then showed him the “funny manager” (what their matching phone straps are modeled after) and while they were laughing in the karaoke room, Anna comments on how his pimples are gone.  At this point, he stands up and informs Anna that he’s in love with her.  When all she says is “thank you” he then follows up and asks if she’ll go out with him.  Makoto comments on how the follow-up is always the key before saying that if he had done the same with Takatsuki, they might have been going out by that point.  Later that week, Takatsuki and Shūichi are hanging out (Shūichi is dressed as a girl) and are on their way to visit Yuki.  Once there, Yuki comments on how he thinks Takatsuki and Shūichi would make a cute couple.  Shūichi then drops a bombshell and says that he’s in a relationship with Anna.  This shocks everyone, but Yuki then begins pressing for information about it while Takatsuki sits there in silence.  On the way home, Takatsuki says that they should probably stop hanging out because Anna might not like it.  When she says good-bye, Shūichi notices that the way she said it sounded incredibly distant.

The  next day, Takatsuki says hello to Shūichi, but he notices that her greeting sounded just as cold and distant as her farewell the previous day.  He tries to ignore it while he’s on his date with Anna at the zoo that weekend, but it still seems like it’s bothering him a bit.  Takatsuki eventually runs into Saori again and informs her that Shūichi is now dating Anna.  Saori is devastated by this news and refuses to go to school for several days.  We see her talking with her mother and saying she wants to drop out of school; when her mother asks what she’s going to do without an education, Saori says she’ll become someone’s mistress.  Her mother tells her not to joke like that, but Saori mutters that she never jokes around about things.  A few days later, Saori’s mother invites Takatsuki (who has been bringing Saori’s homework by every day) inside for tea.  While chatting, Saori wakes up and Takatsuki’s mother suggest that they talk over tea.  Takatsuki tells Saori that she wants to become friends with her again but Saori tells her that it’s impossible.  However, by the end of their conversation, it appears that they might be able to rekindle their friendship after all. 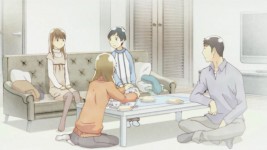 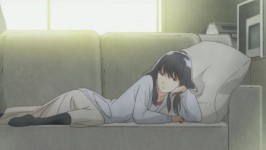 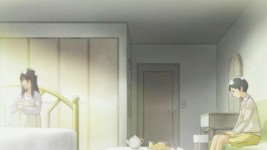 Opinions: Another lovely, well-rounded episode with a bit of changes both in appearance and in love interests for the characters.  Shūichi is finally realizing that his body is changing and that things will only start to become stranger and more foreign as time progresses.  He also has moved on from Takatsuki, although I’m curious as to whether he’s mistaking gratitude for love when it comes to Anna.  But with how upset Takatsuki was when she first heard about Shūichi and Anna’s new relationship, maybe she’s starting to feel things for Shūichi as well?