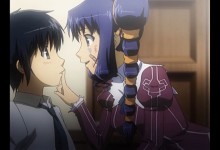 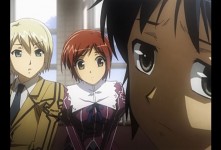 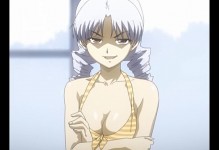 It seems as though Freezing is going to continue with the trend of fanservice and a Fight of the Week.  Unfortunately, it’s not the type of fight you’re expecting.  This week they took a spin on their typical weekly fight scene and turned it into something that was just plain odd.  The episode starts off with Kazuya waking up in the hospital wing with Rana and Bridgette on either side of his bed.  He bolts upright, apologizing to Bridgette for not being any use to her despite getting in the way once again.  Rana scolds him and tells him to lie down since he’s still recovering.  Bridgette doesn’t say much other than she wants him to stay out of the way during her fights because she doesn’t want him getting hurt again.  What she doesn’t tell him is that she’s worried about him getting seriously injured because she’s not sure what she’ll do without him.  Rana says that Kazuya was only trying to help her and that she should be grateful; Bridgette is irritated by this and storms out of the room.  Rana then takes her chance to lean in and tell Kazuya that sometime they’ll be able to perform the Baptism and she’ll be a much better Pandora to him than Bridgette.

The next day after Kazuya is released from the hospital, he’s at lunch with Kaho and Arthur discussing what happened between Bridgette, Rana and the seniors.  Kaho is really curious about what happened between Rana and Kazuya, but drops it when Kazuya doesn’t appear to want to say anything.  She then changes the subject to the prom that’s going to happen (apparently even students charged with saving the world deserve a school dance) and then explains that Pandoras compete with one another in a beauty contest to see who gets to be the Pandora Queen.  We then learn that the girl with blond hair seen in the previous episode being warned by Chiffon is named Elizabeth, and she was voted to be Pandora Queen last year.  Kazuya sees her across the cafeteria and comments that she really looks like a lady; Arthur then teases him about having time to look at other women while he’s partnered with Bridgette.  Rana then appears and asks Kazuya if he has a date to the dance.  When he says “not yet” she asks him to go with her, but as always, Bridgette shows up and glares at them both.  She then argues with Rana, saying that because they’re partners, it’s obvious that Kazuya will go to the dance with her.  Rana agrees and tells Kazuya that she hasn’t lost the battle before kissing him on the cheek and walking away.  This infuriates Bridgette and she demands that he meet her at her room for the dance later that evening.

Meanwhile, Elizabeth enters the senior’s pool and finds Atia, Anett, Creo and Ingrid there.  Atia is furious that Elizabeth wants to cease their plots against Bridgette and Rana; Elizabeth says that they should just accept that they’re powerful and see how the grow into full-fledged Pandoras.  The girls discuss this as Elizabeth takes a dip in the pool (nude, I might add) and Atia declares that she has a plan to make sure that Bridgette doesn’t mess with them ever again. 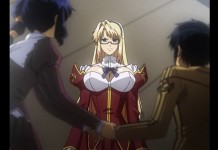 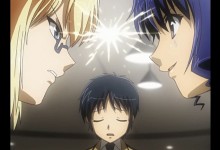 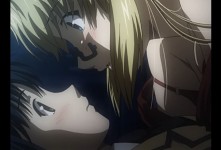 Later that night, the party is in full swing and Bridgette is trying to figure out which dress to wear while muttering about how she could do things much better than Rana if she wanted to.  Someone knocks on the door and she hurries to answer it, only to trip on her dress and fall on top of poor Kazuya.  The two of them stare at each other for a moment until they realize Kazuya is inadvertently groping Bridgette and the two spring apart to compose themselves.  However, Atia decides to show up and challenge Bridgette to a duel – not as a senior, but as Atia Simmons.  Kazuya of course jumps between them, telling them to stop (I swear, that’s all he can say) before Atia elaborates.  She didn’t mean an actual fight, but a duel of personalities on the stage in the Pandora Queen competition.  Unable to say no, Bridgette accepts the challenge and is shocked to find that Atia rips off her uniform to show a very skimpy maid costume.  However, Atia is soon jealous of Bridgette’s large breasts and shouts that just having a large chest won’t ensure her victory before running off.

Skipping ahead, Bridgette is curled into the fetal position backstage, completely mortified of going on stage.  Kazuya tries to encourage her, but it’s only when Rana shows up that Bridgette seems to grow some courage.  Rana says that she should do it for Kazuya since he’s always been at her side and wishes her luck before going on stage herself.  When Bridgette’s name is called, she shuffles on to stage, but isn’t sure what to do, so she merely stands there, frozen.  However, the boys seem to appreciate this more timid side of the Untouchable Queen and cheer for her.  Afterwards, Kazuya and Bridgette are dancing and Bridgette timidly suggests that they “do it too”, which I’m assuming means the Baptism.  If that’s the case, then good for her!  She finally seems to be moving on from her past.  However, before Kazuya can put two and two together, the announcer comes on stage to announce the rankings.  In a landslide victory, Bridgette beats out not only Atia but Elizabeth for title of Pandora Queen!  Atia is furious and has two underclassmen deliver the “Queen’s Outfit” to Bridgette.  Um, let’s just say it’s a very, very skimpy swimsuit that barely covers anything.  And because Atia is a twisted little freak, the heat from the spotlights make the fabric transparent, causing Bridgette to panic.  She calls out to Kazuya and he utilizes his Freezing ability to get her out of the crowd safely.  Aww…how sweet.

However, while all of this is going on, we get a small scene of the teachers talking about how there may be another attack soon and they need to be prepared.  Just then, Sister Margaret (who has been busy with meeting the military in preparation) shows up, shocking everyone. 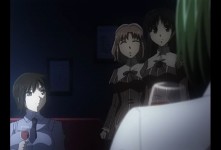 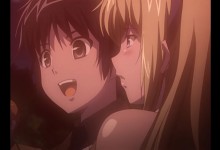 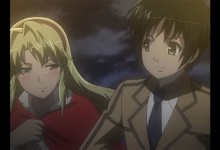 Opinions: I’m glad that we finally got away from the Fight of the Week, but I definitely wasn’t expecting this.  Overall it was a decent episode, but not mind-blowing like the last few episodes were.  It was nice seeing Bridgette get over her insecurities and push herself to do something for Kazuya’s sake and I hope that she does do the Baptism with him.  All I really have to say is…damn.  Are all girls this slutty?  And why does it seem like the animators have to have boobs within the first five minutes of the show?  Maybe it’s in their contract?  Also, I apologize for no pictures of the girl’s entries but uh…a lot of their “outfits” were NSFW.