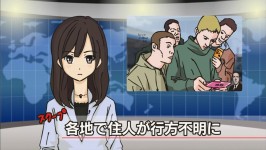 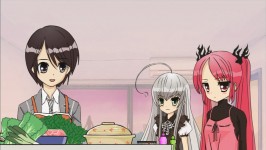 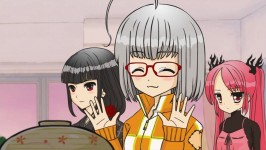 So…because the creators of Haiyoru! decided that my sanity isn’t quite as far beyond repair as they would like, they’ve begun releasing more episodes.  Yes, that’s right.  There will be 12 episodes in total and my sanity is just a tad more lost than it was previously.  But on the bright side, this one was an alright episode.  Not completely cracky, but still cracky enough to be Haiyoru.

The episode starts off with Mahiro watching the news, which is reporting that people are continuing to disappear due to unknown reasons.  He comments that things seem to be getting dangerous, but Nyaruko appears and asks if they’re having nabe for dinner.  Just as he’s about to answer her, Cthuko appears and asks the same question, to which he responds yes.  Then, Atoko and Nyarlko appear and comment on how they’re having nabe, but Nyarlko goes on to say that they’ll need their strength for the upcoming fight.  Mahiro sweatdrops and asks her if she said more than she wanted to, but is then distracted by Cthuko stirring the nabe (which apparently is a big no-no)!  Nyaruko then shouts about incoming ingredients, but the next frame is her sobbing in a corner with a rather large bump on her head while Mahiro shouts at her (there’s also a large, red, tentacle-y thing in the pot).  Just as Nyaruko comments on how there’s a large gathering of aliens in Mahiro’s house because they were all drawn to him, Mahiro stops her and looks out the window just in time to see the large brick slamming into the city. 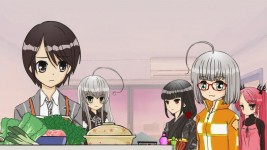 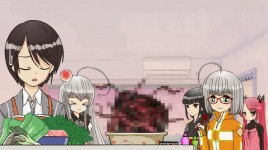 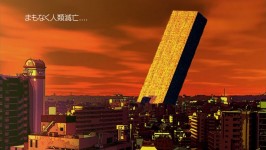 Opinions: Haiyoru! still isn’t one of my favorite series, but at least we got a bit of a cliffhanger in this episode as well as some clues of what’s to come.  Because of Nyarlko’s big mouth, we now know that there’s going to be a big fight coming up in the next episode or two and of course, the large brick has now slammed into Earth.  Although the impact wasn’t as epic as I thought it was going to be; it looked like a large brick being somewhat gently set down into a large sandbox.  Hopefully the next two episodes will be fairly decent!  I also wish that all of the sites hadn’t lied about there being 9 episodes and getting my hopes up…