After getting two episodes released at the same time, I was ecstatic because I truly thought the series was over.  Then I realized there’s three more episodes left. *sob*  My distress aside, both episodes were…decent. 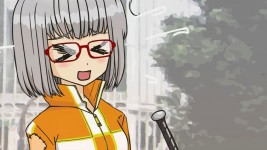 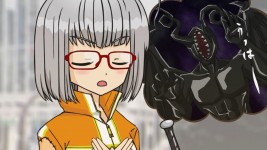 Episode 8 opened up with Nyarle apologizing profusely to Mahiro for defending him from the Nightgaunt’s attacks (whatever the hell those are) because Nyaruko and Atoko were off shopping and she was the only one home to defend him.  She then rambles on and on for about a minute and a half about how sorry she is, but she was flustered that she was home along with Mahiro.  Then she stumbles and says that she’s not attracted to him at all before hanging her head and telling him to ignore what she just said because it turns out she looked in the mirror and was shocked to find that her disguise wasn’t working.  Mahiro says it’s fine, but wants to know if there’s any way she can return things to normal.  Nyarle then spazzes some more and combusts into what I’m sure is her “true form.”  Mahiro sighs and we then find out that not only is he on the toilet, but he and Nyarle are now sitting in the middle of a busy street with a rather large crowd around them. 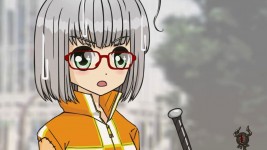 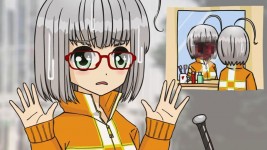 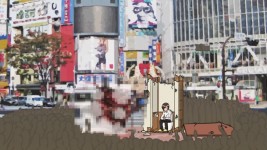 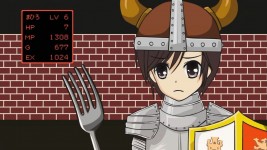 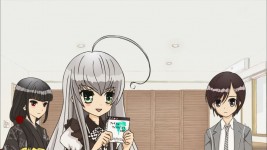 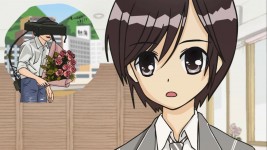 Episode 9 opens with Nyaruko and Atoko asking Mahiro if he’d like to play an RPG with them (if you look at the cover, you’ll see that it says Final Fantasy XIII.)  Mahiro asks what it is and Atoko says it’s virtual reality, which piques Mahiro’s interest.  He agrees, but finds himself inside the game itself.  If you look at his little stats window, he’s down to 3HP but has a massive amount of MP!  He comments on this, saying it’s kind of stupid for him to have all of that MP if he can’t even use any spells.  He then runs into a monster of some sort, who asks if he wants strength.  Thinking that he’ll learn a new attack or spell, he says yes and a bottle of “elixir” is thrown at him.  He then shouts about it being leftovers.  We end the episode with him covered in bandages and informing Nyaruko and Atoko that he’s  never playing an RPG with them ever again. 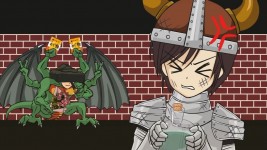 Opinions: Both episodes were meh at best since neither of them had any sort of coherent plot-line (as usual.)  Although, why does Nyarle have such a hard time keeping her disguises up?  When she holds up her hands, what the hell is waving around the baseball bat?  Why does she sound like a gerbil on helium?!  Episode 9 was kind of amusing because I can relate to Mahiro being frustrated over a character having tons of MP, but no spells.  But now that we’re down to 14 days until mankind’s destruction, don’t you think a little bit more plot is in order?  Probably not, but at least there’s only 3 more episodes left!