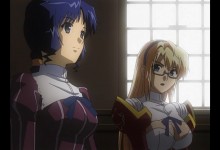 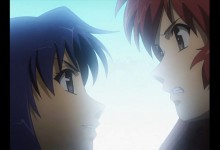 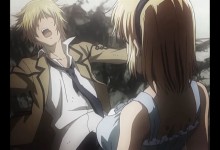 In a twist, the producers of the show actually decided to include more plot with the fanservice!  This ended up creating the best episode to date which really renewed my faith in this series.  For those of you who don’t remember, last week a new transfer student by the name of Rana appeared, declaring Kazuya as her soulmate right after Bridgette decided to take Kazuya as her Limiter (without performing the Baptism, of course.  Let’s not get carried away here, kids.)  Of course, Bridgette is infuriated that she now has competition for Kazuya, although we’re still not entirely sure as to why.  This week we start off with Kazuya waking up in the hospital room and noticing that Bridgette has fallen asleep at his bedside.  He nudges her away and she quickly exits, but not before saying that despite it not being the “traditional” way to spend a night together, she enjoyed it.  Later, we find out that Rana has been transferred into Bridgette’s class; although she’s still a beginner at Genetics, her skills and age have bumped her up to sophomore ranking.  Rana takes the seat next to Bridgette and she slyly informs Bridgette that she intends to prove to Kazuya that he belongs with her.  Bridgette seems a bit edgy about this and you can definitely see the sparks flying between the two of them.

Their next class appears to be P.E., and although Bridgette is sitting out, we finally get to see Rana fight.  She’s paired with Ganessa for a “friendly” sparring, but Ganessa appears to have no inclination of taking it easy on Rana despite it being her first day at the academy.  However, Rana is unfazed by this and releases her volt weapon, which turns out to be a pair of gloves and boots made of steel.  The girls go at it and Rana easily overpowers Ganessa, driving her into a corner and causing Ganessa to unleash her ultimate attack.  Rana manages to evade it and deals a finishing blow on Ganessa, but before she can truly finish her off, the teacher calls an end to their sparring.  From here, we can see two of the seniors watching the match from their dorm room (shouldn’t they be in class?) and saying something about things will become interesting soon.  Afterwards, we find Kazuya eating lunch with Kaho and Arthur who are, once again, telling Kazuya to severe ties with Bridgette and find someone else to be his Pandora.  He ignores them and their conversation of how Bridgette came to bear the name “Untouchable Queen” is interrupted as Rana approaches, asking if she can eat lunch with them.  They agree and she then takes the opportunity to throw herself at Kazuya, begging him to call her by her given name and with no honorifics.  Kazuya seems a bit flustered by this (aw, he’s just a regular gentleman, ain’t he?) but agrees.  At this point, Bridgette appears and asks to speak with Kazuya in private. 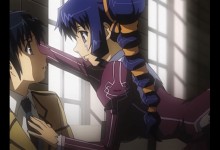 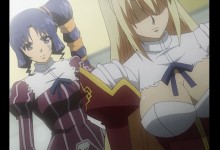 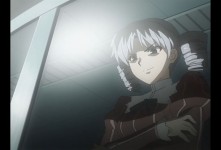 Despite Rana’s protests, Kazuya leaves her and follows Bridgette up to the roof.  As he leaves, a senior we’ve seen before approaches Rana.  She introduces herself as Atia Simmons and informs Rana of how Bridgette is simply using Kazuya for his powers as a Limiter (although this still has yet to be proven.)  Meanwhile, Bridgette is upset that Kazuya is calling Rana by her given name, but still calling her “Senpai” and asks him to call her by her given name, Satella.  Flustered, Kazuya agrees, but still sticks on the honorific “senpai” which seems to upset Bridgette a bit, but hey!  We’re getting somewhere!  After classes are over, Kazuya returns to his room, reflecting on the story Kaho and Arthur told him about Bridgette using a powerful Limiter, but only for his powers.  Instead of being worried about whether she’s doing the same with him, he merely wants to hear more about her past.  He may be an idiot, but at least he’s a loyal idiot.  Meanwhile, Rana is reflecting on what Atia said about Bridgette as well as what her village elder said about fighting for her soulmate.  She then breaks in to Bridgette’s dorm room while the latter is in the shower, surprising Bridgette.  Rana then asks Bridgette to take a walk with her somewhere.

That somewhere turns out to be a training facility.  Rana then challenges Bridgette to a battle over Kazuya; Bridgette initially declines, saying that Kazuya has already made his choice and there’s no reason to fight over him.  Of course, once Rana grabs her shoulder, Bridgette snaps and slaps Rana.  They then begin fighting, saying that if Rana wins, Bridgette has to break up with Kazuya and if Bridgette wins, Rana has to leave Bridgette and Kazuya alone.  Seems fair enough to me.  The two seem to be fighting on equal footing at first, but then Rana performs a technique called “Eight Pole Fists of the Holy Gate”, which essentially draws powers from the stigma on her back and transfers it to her hands and feet as pure power.  It’s with this technique that Rana is able to put Bridgette on the defensive, pushing her into a corner until Bridgette performs an accelerating turn, impaling Rana in her shoulder with her volt weapon.  Rana then smirks, saying that Bridgette fell into her trap before unleashing her close range assault, which unleashes a huge amount of force on the opponent in a small proximity.  Bridgette falls to the ground, only to try getting back up although Rana tells her that six of her ribs ought to be broken and “sticking into your guts.”  Sounds um…pleasant.  Either way, it’s at this point that Kazuya rushes in as per usual, scolding the two for fighting over him.  He tells Rana that he made his decision who he wanted to be with long ago, but just as she’s about to object, Atia and the two seniors we saw earlier appear.  They then inform Rana and Bridgette that they’re going to be fighting them to restore order to the academy. 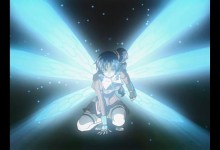 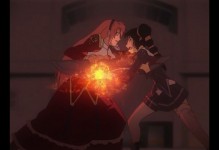 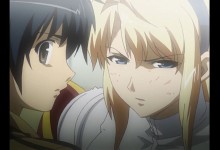 Opinions: I was pleasantly surprised with the amount of plot in this episode!  The fact that Rana is proving to be a rather powerful rival to Bridgette was a wonderful twist, although instead of the nice girl I originally thought she was, she now seems to be a bit of a slut for throwing herself at Kazuya like that. =/  Maybe that’s just me though.  But seeing Rana and Bridgette fight each other was really cool and included a bit of drama and intensity I’ve felt the past few fights have been missing.  Maybe it’s because of the fact that there’s a renewed sense of competitiveness that drew me in.  Either way, if the show continues on in this sort of pace, I’ll definitely be more inclined to watch it compared to how I’ve been feeling the past few weeks.