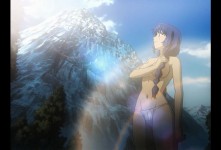 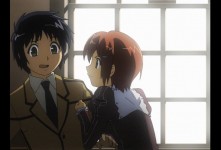 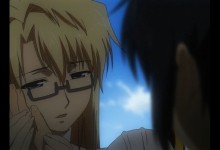 After watching this episode, I had to give myself  nearly a week to let what happened sink in.  After all that time, I’m still baffled.  This week’s episode starts off with an unknown woman bathing in the springs of her mountain-dwelling village.  We get a few shots of her village elder telling her that she is to venture to the west, to find her “destined man” and use her Tears of Kunlun to save mankind.  We then get to see her back and notice she has stigma implanted in her back, much like the students at Genetics.  Hmmm…  Anywho, we then join Kazuya and his classmates who are *gasp* actually in class and learning!  His teacher then informs the students about the Nova’s Freezing effects and how a Pandora needs a Limiter to erect a Freezing barrier of their own in order to negate the Nova’s attack and be able to move around freely.  Finally!  Something about the Nova’s and I already know about it.  Why me?  After class, Kaho and Arthur ask Kazuya about his Freezing technique and he says he’s not sure how it happened like that.  All he remembers is desperately wanting to help Bridgette, but he doesn’t remember how to get the effect to work.  Kaho is disappointed, but once again tells him to stay away from Bridgette because she’s a “rose with large, poisonous thorns.”  Of course, Bridgette walks up right when she says this and Kaho instantly starts backpedaling (I could seriously see the gears working in her head at this point), saying they were only talking about how pretty Bridgette is.  Bridgette blows her off before informing Kazuya she would like to speak with him in private.

Kazuya agrees and follows Bridgette up to the roof where she promptly grabs his hand, placing it on her cheek.  After a moment, she murmurs that she doesn’t feel dirty or violated when he touches her.  She then asks him to be her Limiter, with the only requirement that they not do the official baptism because it still feels too lewd for her.  Kazuya eagerly agrees despite not being officially baptized and Bridgette then asks him if he has any plans for lunch.  When he says no, she asks him to join him and he agrees.  We then see the two at lunch and Bridgette stammers a lot before finally asking Kazuya to meet her in her room at a specific time that evening.  Confused, Kazuya agrees and Bridgette runs off, utterly embarrassed by it all.  After lunch, Kazuya is returning to class and runs in to the girl we saw in the beginning of the episode, who appears to be a transfer student and is completely lost on the large campus.  She runs to him, thankful to be saved from the maze of the campus and he escorts her to the principal’s office so that she can finish her paperwork.  As they’re walking, they introduce themselves and her name turns out to be Rina.  She thanks him for escorting her and says that she hopes they’ll become friends. 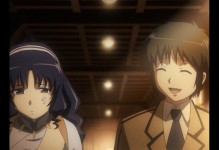 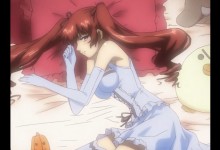 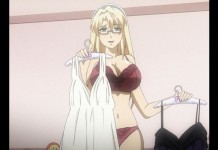 After class, Kazuya is walking back to the dorms with Kaho and Arthur, only to drop the bombshell that he agreed to be Bridgette’s Limiter.  Both of his friends are stunned before shouting at him and telling him that it’s not too late to back out of the agreement.  Kazuya then mentions that he’s supposed to meet Bridgette in her room and Kaho and Arthur blush a bit.  Apparently it’s part of the ritual when a Pandora obtains a Limiter and Arthur tells them about his experiences with Ganessa.  He said he doesn’t remember much other than the fact he was drunk and Ganessa had picked out her best lingerie for the occasion.  Of course, he then promptly falls on her and passes out, using her chest as a pillow.  Kazuya ignores their protests before running off, saying that it’s close to the designated time.  (It’s while this is all going on that we see Bridgette fussing over which night gown to wear for the evening.)  However, as Kazuya is about to enter the dorm building, he’s stopped by the three upper classmen that Bridgette defeated in the first episode.  They mention that he’s the famous boy who’s willing to get close to Bridgette, but unfortunately they won’t allow it.  They then proceed to beat the shit out of Kazuya while Arthur and Kaho watch on in horror.

Kaho and Arthur decide to jump into the fray and quickly get incapacitated by the upperclassmen.  It’s now that Kazuya becomes so enraged that he activates his Freezing, temporarily causing his attackers to stop moving before he passes out.  One of the girls is about to attack Kazuya while he’s out, but Rina shows up and quickly defeats all three girls.  Arthur then runs to Bridgette’s room and informs her that Kazuya is in the hospital and she should come immediately.  When she arrives, she meets Rina and there’s instant tension between the two.  Arthur drags Rina away, saying that Kaho wants to thank her again for her help, leaving Bridgette alone in the hallway.  Two doctors then emerge, telling her she’s able to visit him, but warning her that he’s unconscious.  She enters the room and sits beside his bed, a small smile on her lips as she looks at him.  Meanwhile, Kaho and Arthur start questioning Rina as to how she was able to defeat the upperclassmen so easily.  Rina shows them her stigma and says that her village elder told her to come here and find her “destined man.”  Arthur comments on how she’ll easily be able to find one, but Rina says that she’s already found him.  And yes, she means Kazuya. 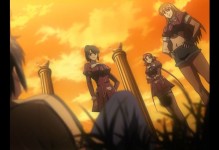 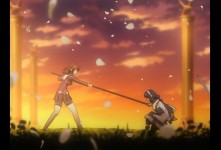 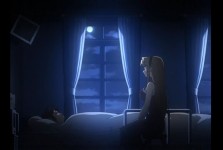 Opinions: I had really high hopes for this episode.  It started off nice with some decent plot (although I’m not too keen on introducing new main characters at this point) and just as I thought we’d be able to avoid a Fight of the Week, it happened.  Again.  And seriously, I think this school must have a bust size requirement.  Everyone has a huge rack!  Especially Bridgette!  They also must have a rule against wearing bras since every single time a girl’s uniform gets shredded, there’s no bras in sight!  Can we move on to the plot now, please?