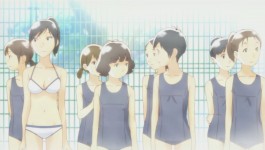 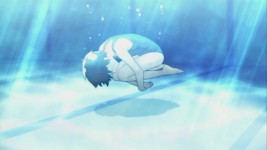 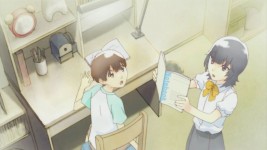 This episode wasn’t quite as deep as last week’s but it was still able to tug at my heartstrings with the small, almost innocent moments between the characters.  It’s almost summer break and the episode starts off with Shūichi’s class using the school swimming pool for P.E.  All of the boys are staring at Chizuru because she wore a bikini (something the teacher points out is inappropriate for school) and is showing off her breasts, which are more developed than a lot of the other girls.  Momo mutters something about wishing to look more womanly and Takatsuki asks her if she means Chizuru.  Momo says no and points to Takatsuki, saying that she has a really nice waistline and she’s jealous of her.  This seems to startle and upset Takatsuki, who dives into the pool and curls into the fetal position while underwater (Shūichi notices how upset she is, but is unable to do anything).  After school, Saori and Shūichi are continuing to work on their play for the school cultural festival, but Shūichi is distracted by the basketball team running laps outside – most notably Takatsuki.  Saori is angered by this and says that school is too distracting for them to work properly, so Shūichi suggests that she come to his house the next day to work on the play.  She agrees, but is somewhat upset that he doesn’t want to go to her house.

When Shūichi gets home, Maho tells him to stay in his room because she has friends over and doesn’t want to be bothered.  He does as he’s told and heads to his room to work on homework and the play.  As he’s writing in his notebook, Maho’s friend Anna appears behind him and snatches his notebook away from him, reading part of the script aloud.  Shūichi is bothered by this a lot and tries to get the notebook back from her.  Maho comes into the room to find Anna staring at Shūichi as he crouches in a corner with his notebook and asks what’s going on.  Anna says that she made him cry but Maho dismisses her concern for Shūichi, saying that he cries all the time so it’s nothing new.  Anna glances at Shūichi one last time before leaving the room with Maho.  Meanwhile, Takatsuki is paying a visit to her friend (who I originally thought was her mother).  She’s surfing the web, looking at a clothing store that has something to bind breasts and allows you to wear whatever you want.  She then asks her friend how she met her husband and the woman chuckles, saying they’ve known each other since grade school and that he was the only boy who didn’t pick on her.  Takatsuki is amazed by that, but quickly forgets her concerns when the woman gives her a piece of cake and the two chat for awhile.

The next day, Shūichi’s teacher calls him and Saori into the teacher’s lounge to ask how the play is going.  Shūichi says that they plan on completing it over summer break and when their teacher says that he’d like to see what they have so far, Saori snaps at him, saying it’s not completed yet.  As they leave, another teacher comments on how it must be hard for a boy and girl to work on a script together since they’re at such a sensitive age.  Their teacher can only agree as he hangs his head and sighs.  After school, Shūichi and Saori are working on their script with Makoto in tow.  Saori doesn’t seem too pleased to see Makoto there, so Shūichi offers to go get something for everyone to drink in order to break the tension.  After he leaves, Makoto asks Saori if she’s in love with Shūichi before commenting on how Shūichi is in love with Takatsuki.  This angers Saori even more and once Shūichi reappears, she asks him if he wants Takatsuki to love him as he is or if he wants her to love him as a girl.  Shūichi is confused and says he does’t know how to answer that question before trying to change the subject.  Once the group is done, Makoto and Saori are walking home and Makoto comments on how he thought that she would try to tease Shūichi more than she did.  Saori doesn’t say much, but Makoto seems to understand her feelings for Shūichi.  Meanwhile, Shūichi gets a phone call from Takatsuki, who is under his balcony.  She shouts up to him, asking him if he’d like to go on a date with her the next day so long as it doesn’t rain and Shūichi accepts. 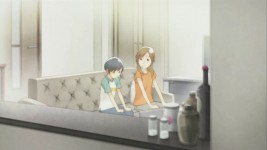 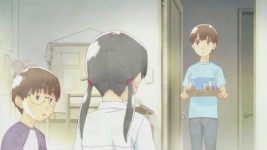 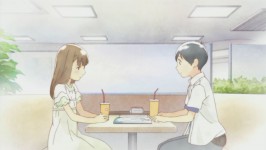 Thankfully, it doesn’t rain and the two are able to go shopping, although Shūichi does dress up as a girl for their outing while Takatsuki wears some rather boy-ish clothes.  They find the shop Takatsuki had been looking at online and venture in to look at the clothes.  Afterwards, they stop for lunch and Takatsuki asks Shūichi if he wants to wear a bra.  Embarrassed, he said that he can’t because he doesn’t have breasts and soon he’ll be growing facial hair and his voice will be changing.  Takatsuki laughs, saying that doesn’t matter and it’s about whether or not he wants to wear a bra.  Not much else is said on the topic and Takatsuki accompanies him into the women’s restroom while he changes back into his normal clothes to head home.  As he does so, they start talking about the script and Shūichi confesses that he wants Takatsuki to play Romeo and he wants to play Juliet because he wants her to see him as a girl.  Takatsuki apologizes because she wasn’t aware that it was such a big deal for him and promises to help him with the play the best she can.  Shūichi then mentions that he was caught by his sister recording his voice and how he shouldn’t have used his sister’s name and Takatsuki says that she’ll give him her name if he gives her his name in return.  Shūichi agrees and gains another idea for the play.

Meanwhile, Maho is out with her friends doing karaoke and Anna excuses herself to the restroom but pauses at the main desk after seeing some oddly shaped cell phone straps.  The clerk comments that they were made by the owner and she contemplates it.  After Shūichi gets home and takes his bath, Maho hands him the strap, saying that Anna bought if for him.  Shūichi is surprised, but initially thinks that it’s a weird looking charm.  He then wonders if Anna thinks that he’s an odd looking boy who deserves an odd looking charm.  The next day at school, their teacher asks the class for volunteers to help Saori and Shūichi with the play and Takatsuki is the first to volunteer.  She’s followed by Chizuru, Momo, Makoto and Sasa and their teacher is pleased to see that there’s a bunch of people willing to help.  Saori, however, is furious with him for suggesting that they volunteer in the first place.  After school, Shūichi is walking with Makoto when he gets a phone call from Saori asking him to come over right away.  Makoto is transfixed on Shūichi’s new cell phone charm and wonders why he has such a creepy looking charm.

Shūichi arrives at Saori’s house and the two begin working on the play together – Saori said she wanted to work on it alone with him one last time before they had to share their ideas with the others – and she reads what he has written so far.  She says she really likes the idea of them swapping names and begins to recite the lines.  Shūichi applauds when she’s done, but she tells him not to applaud because it’s clear that he’s written the parts for Takatsuki to play Romeo and for himself to play Juliet.  She then says that she’d be willing to give him her name, but Shūichi says that he’s already had that conversation with Takatsuki the other day.  Saori seems irritated about it and asks him if he plans on getting a surgery when he’s older or not.  Shūichi isn’t sure how to respond, but says that he’s not doing it for her or for Takatsuki; he’s doing it for himself because it makes him happy.  Deciding that the conversation is over, Saori asks him not to mention Takatsuki around her anymore because she just can’t seem to forgive her.  Shūichi agrees and the two start working on the script some more.  After Shūichi heads home, Saori heads to her local church and prays for the success of the play and for Shūichi to receive the part of Juliet.  She then asks that she be cast as Romeo instead of Takatsuki. 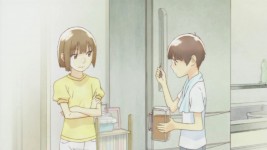 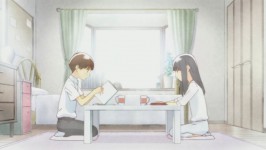 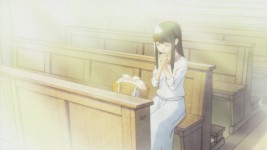 Opinions: Another great episode and it’s really interesting to see how these characters adapt to the changes they’re experiencing.  Momo wasn’t quite as abrasive in this episode, which I liked, and we also got a peek at how insecure she is with her own body, which may result in her clinging to Chizuru so tightly.  However, Saori’s jealousy of Takatsuki is starting to get a bit annoying and I don’t especially like how she’s been acting towards Shūichi.  I also hate how his sister is so bossy, but then again, most older sisters are so I can’t really fault her for that.  The moment between Takatsuki and Shūichi was super sweet and I loved how they agreed to switch names if their wish ever came true.  Over all, definitely another good episode.