Despite a rather epic fight in this episode, some good old fashioned plot twists, and a new character introduction, this episode felt mostly like a bridge to the next episode. For the purpose of serving as a bridge to a more epic upcoming episode, this episode does well though, and we definitely are shown some interesting things.

First and foremost, its important to talk about  the fight between Midnight and Erza. Now… from last episode, I had assumed that Midnight grossly overpowered both Erza and Jellal, and this is why this battle was quite surprising. Erza made quick work of Midnight, and totally owned him. Not only that, she found two very fatal flaws in the guys powers, breaking him and doing it in record time. For all the scheming and dastardly evil tricks that  Midnight tried to concot, it seemed like he was nothing more than a child trying to act cocky in front of a much older, experienced and wiser Erza.

The kid was pretty much reduced to a whiny, crying little brat by the end of the battle. With Erza’s fake eye, and her equipping abilities, the match was a very quick one. I definitely enjoyed the battle, although I felt like this whole battle was a missed opportunity. Here was a kid that actually seemed like he was pretty evil and dastardly, and ontop of that he seemed to be on par with Aizen from Bleach. Yet, he got taken down in seconds, and was given a whole sob story about how the whole rebellion in the Heavenly Tower had traumatized him. Again, not bad, but not totally ZOMG awesome either XD

The other big reveal, was that of Zero. So it turns out that the big baddy is actually a split personality from the horribly weak Brain. I did kind of wonder how everyone listened  to Brain even though he was pretty darn weak. It makes sense that Brain had a much darker, more fierce side to him. Of course, this whole idea of Brain having a split personality makes me wonder a few things.

First… How and when did Brain seal off his more brawnier, stronger side? Why did Zero even allow him to do it? From the looks of it, he seems like he’d be able to take control of Brain’s body pretty darn easily.

Second, when was this guy sealed to begin with? Was it waaay back, before Oracion Seis was even formed? I recall us seeing a Flashback  of Brain teaching Jellal magic (Although that was anime original I believe..), so this Zero fellow has been locked up for that long? Added to that, wasn’t Brain a researcher before Oracion Seis was formed?

You see where I’m going with this XD Zero is one hell of a big contradiction. Its a classic “the weak bad guy actually had a strong alternate personality” plot twist but introducing him into the picture begins to mess with continuity quite a bit XD

But regardless of how much sense it makes, Zero is here, and he’s pretty bad ass. Taking down Gray’s sheild, but more importantly taking down Natsu like this: 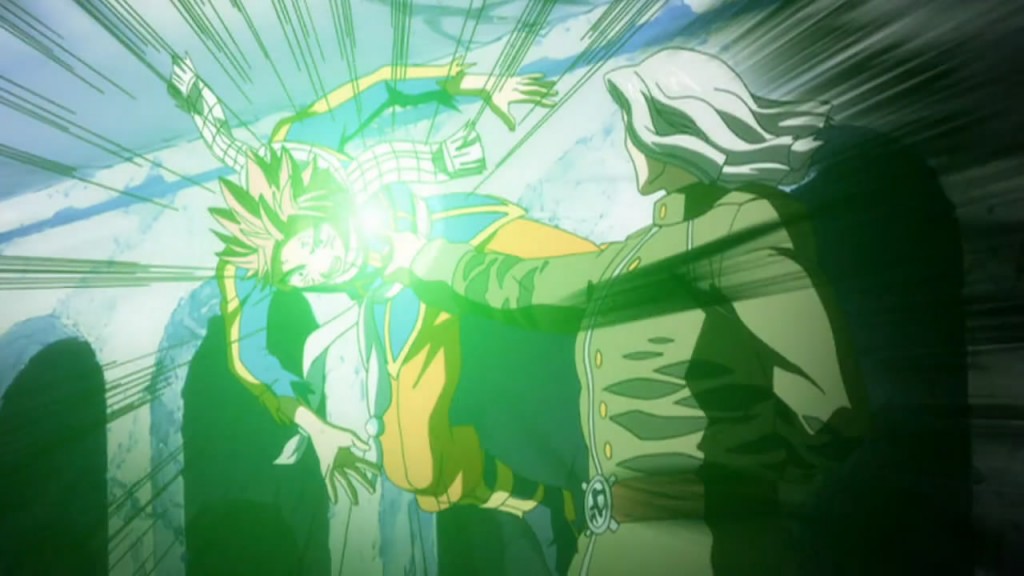 Wow is an understatement. Just one finger…ONE FINGER! Boom, down goes the Natsu XD. That was quite impressive, as I think its high time Natsu got some manner of a challenge. In the Cobra fight, Natsu seemed to be at a severe disadvantage cause of Nirvana and his motion sickness, so I’d say they were evenly matched. Here, we can obviously see Zero has thee upper hand.

Zero took down most of Fairy Tail, and now he’s getting ready to wreck havoc on Caitshelter. I honestly can’t wait for next episode, and will hopefully review that on time XD Sorry for the delay this week folks, and a big thanks for waiting!

Its Blue Pegasus to the rescue next week! We also see a revived Natsu and… the return of Evil Jellal? ZOMG… NEXT WEEK BABY! NEXT WEEK! :O