After what seems like a good while, we finally get an awesomely amazing episode from this season. Some great action, a decent conclusion and more developments to lead us on to the next few episodes. Things are definitely looking good.

As this was the conclusion of the latest arc, J.C Staff didn’t pull any punches with this episode. They effectively cut out both the OP and ED from the episode, and gave themselves room for more content to be included in the episode. And damn… was there some great content. The best thing about this episode was definitely the two fight sequences between Touma and Biago. I gotta say, Touma is getting to be more and more of a badass. The way he took down Biagos powers and then unleashed his signature move: 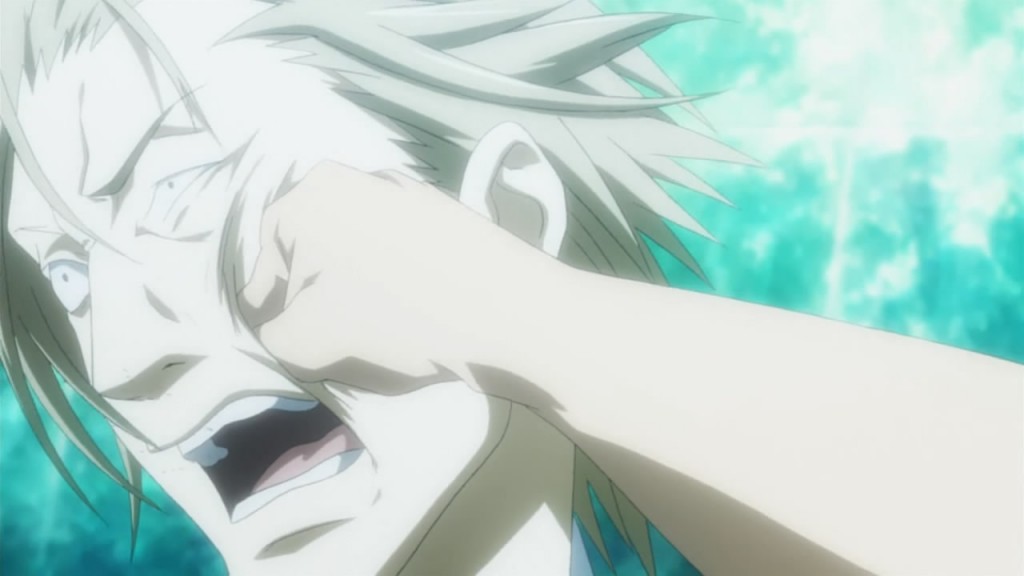 Punch the Villain in the Face = Touma Signature Move

Of course, said Punch to the face wasn’t enough this time. So Touma took on Biago a second time, and that fight was definitely 10 times even more awesome. I mean wow. Dodging all these crosses, then and then using his left hand to deflect the last cross before giving him a good punch to the chest with his right. Touma definitely is a force to be reckoned with.

I found Biago’s comment about Touma’s hand rather interesting. It does go to show that Touma is a very interesting person, taking the misfortune of his Right hand, and using it as a weapon against magic and Esper powers. Most normal people might have just cut their hand off to have a slightly more normal life. I think it makes sense that Touma doesn’t follow any religion, and instead replaces those beliefs with his own morals and pushes forward with the help of his “blasphemic hand”.

Other than that, the exchange between Orsola and Agnese was definitely interesting. I found it ever more interesting that Orsola never outright said that she had forgiven Agnese, even if its just me reading too much into things. She first said that she really didn’t know the reason, and then went on to talk about the other two sisters. There was no mention of “I felt sorry for you”, because she obviously didn’t XD Not that I blame her.

The reveal about the plan of using the Queen’s Fleet was definitely an interesting one. I had to agree with Biago that his actual mission was a lot more interesting than what Touma had thought/imagined. I also loved the fact that Touma actually did DO something this time, and that was taking down Biago. Instead of… you know, being saved by Fireworks.

The last few bits of the episode were definitely interesting. We got a hint that the next episode is going to be ToumaxMikoto centered, and I personally can’t wait! The ToumaxMikoto fan in me is  just squealing in glee right now. Added to that, we also got to see the Pope of the Roman Catholic Church and some really freak woman. It seems that Touma has come under their direct line of fire now, which isn’t surprising since he’s pretty much been keeping them at bay and foiling most of their plans.

Touma is definitely going to need all his allies, when he is eventually deemed an enemy of the Roman Catholic Church and then targeted. I guess it was definitely good that he went out of his way to help so many specially powered people XD

So… All in all, I’d say this episode was pretty much great. Great dose of action, story and some comedy and fanservice. The final bit with Kanzaki Kaori imagining herself in an Angelic Maid outfit for Touma was friggin hilarious. Oh God Touma…. you have so many women after you, You dawg! XD

Zomg, Accelerator and Touma x Mikoto next week? *dies* MUST HAVE!!!!!!