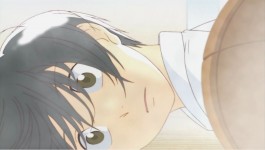 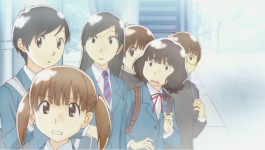 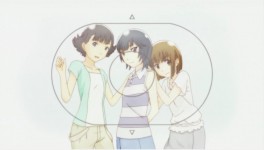 Every week this show is like a trip down memory lane, reminding me of the time when I went through the same trials as the characters.  Because of the story’s uncanny ability to make me relive some of my more awkward moments as a pre-teen has allowed me to relate with the characters on a deeper level.  This week we start off with the girls getting out of basketball/volleyball practice and Takatsuki is called out by an upperclassman for not wearing a bra.  Shocked, she collapses on the floor and the upperclassmen wonder if she’s being a bit too dramatic while several laugh.  Afterward, class starts and their teacher asks them to start thinking about what they’d like to do for the cultural festival.  Several students shout out typical ideas such as a maid cafe and haunted house, but Saori stands up and suggests a genderbender play where all of the boys play female roles and the girls play male roles.  After a quick vote, the class decides on the play and their teacher suggests that the students write the play themselves.

After school, everyone is discussing the play and Chizuru tells Saori that her idea was really cool and she’s excited to see what they come up with.  Saori ignores her and instead tells Sasa that she thinks she’ll look really cute dressed up like a boy (Sasa complains, saying she’ll look like her little brother) and Momo pipes up, scolding Saori for ignoring Chizuru.  Saori ignores Momo as well and Momo screeches at her about it and Saori agrees with her before saying that she hates her.  She goes on to say that it was only a coincidence that they were walking home together, but maybe they should stop walking home together.  Everyone is shocked (especially Sasa) and no one says anything as she walks away.  Chizuru breaks the silence by saying Saori is “cool” and Momo scolds her, saying that she always likes weird people.  Meanwhile, we see Maho at a photoshoot with several other models and her phone starts ringing.  One of the girls scolds her, saying that she’s not supposed to have her phone on during shoots, but she excuses herself to take the call anyway.  Turns out, it was the boy she likes (and is apparently dating) calling to see if they can meet up after he photo shoot.  One of the girls is angered by this because she doesn’t think Maho is serious about her job if she’s just going to make plans to meet up with her boyfriend later.  Maho confesses that she wasn’t sure how to go about telling her about him because she felt like she doesn’t like boys much.  The girl becomes offended and storms off.

Before Maho gets home from her photoshoot, Shūichi is helping his mom prepare dinner when Takatsuki calls him.  She tells him that she thinks he should write the script for the play because he’s really good at writing.  Shūichi is a little flustered to hear this, but takes the idea to heart.  After hanging up with Shūichi, Takatsuki is about to get on the bus when a gentleman asks her if a package on the bench is hers.  She blushes and grabs it, thanking him before hopping on the bus.  That night, Shūichi is up late trying to think of an idea for a play and Maho complains that his desk light is too bright and she’s not feeling well.  He turns down the lamp’s brightness, but continues working on his script for the play.  As he writes, he comes up with the idea of boys and girls switching places to become opposite genders.  He then wonders whether people would be shocked and upset about this change, or if they wouldn’t mind.  At this point, he imagines Takatsuki as a boy and blushes, reminding himself that he’s decided that they’re only going to be friends. 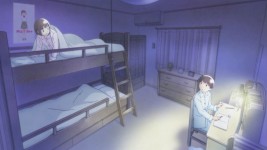 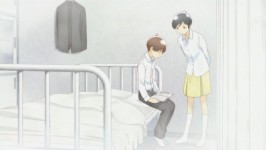 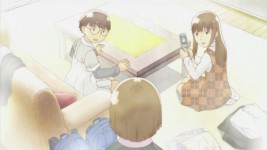 The next morning, Maho is home sick with a fever and Shūichi isn’t feeling well either because of staying up all night to work on his idea for the play.  His mom suggests that he stay home and go to school later when he’s feeling better, but Maho tells her to quit baby-ing him and have him rest in the nurse’s office like a normal person.  On the way to school, Makoto is worried about Shūichi and shields him with his backpack so that he doesn’t feel any worse from the sun (this made me go “d’awww” at how sweet Makoto is.)  Once he’s at school, Shūichi goes to the nurse’s office to rest and finds that Takatsuki is there as well.  Both of them say that nothing serious is wrong with them and Takatsuki suddenly asks him what he would do if he had to wear a bra.  She blushes and apologizes for asking such a weird question, but Shūichi tells her it’s ok and pulls out his notebook, saying that he’s just gotten an idea for the play.  As he writes, he tells her about it; his idea is that a boy who wishes he was a girl and a girl who wish that she was a boy meet in their secret spot and make a promise to make that very thing happen.  After returning to class, someone calls to Shūichi, saying that a junior is looking for him.  Turns out, it’s Maho’s boyfriend and he asks if he’ll be allowed to visit her after school.  Shūichi says it’s okay, but wonders why his voice sounds sick.  At first he thinks it’s because he’s sick, but Makoto says that his voice is probably changing.

After school, Makoto comes over to Shūichi’s house and begs Shūichi to dress like a girl with him.  Apparently Makoto is really upset about his adam’s apple growing and his voice changing, so he justifies his request by saying that they have to do it as much as they can before their voices change.  Shūichi agrees and once the two of them are changed, Makoto decides to record their voices (as if they were girls) for later when they’re unable to do this anymore.  As Shūichi is recording himself (using his sister’s name, no less) Maho comes out of her room and is furious with them for dressing up.  Just as she’s about to yell at him, the doorbell rings and she goes to see who it is.  It’s her boyfriend and she scrambles back to the living room, telling Makoto to answer the door.  Makoto is nervous, but says he’ll just continue with the act and no one will ever know.  Unfortunately, Maho’s boyfriend knows who he is and shoves past him only to find Maho trying to undress Shūichi before her boyfriend came inside.  He tells her to go back to bed and tells her that he brought her oranges so she’ll feel better.  Maho doesn’t say anything, but he says that it’s probably her fever making her act funny before leaving.  Maho then comments that his voice sounded funny and she hopes that he didn’t catch her cold.

The next day, Shūichi turns in his script, but it turns out that Saori has also written a script based on the play Romeo and Juliet.  The teacher has them read each other’s scripts to see which one they like best and they both say that the other’s play would be better.  Instead of picking a script, their teacher suggests that they work together to combine their plays and create something wonderful.  They agree and meet up in the school library to try and combine their ideas.  They end up getting teased by some classmates and Saori invites Shūichi over to her house, promising not to do anything weird.  He agrees and they pack up their stuff to leave.  Meanwhile, Takatsuki is on her way to practice and the same upperclassman that teased her about wearing a bra before runs up behind her, grabbing her breasts and asks her why she’s not wearing a bra.  Embarrassed, Takatsuki calls her an idiot and storms off.

Once they arrive at Saori’s house, she tries getting Shūichi to wear some of her dresses and he tells her that she promised not to make him do weird things and that it’d be kind of silly for him to dress up like a girl when they’re supposed to be working.  She apologizes and they start working on their script, but Saori starts getting angry because she can only think about Takatsuki as Juliet and Shūichi as Romeo.  Meanwhile, Takatsuki is trying on her new bra but becomes angry and upset before ripping it off and looking at the boy’s uniform that her mother had bought her.  She realizes that because of her newly developed breasts, she’ll never be able to wear it.  The next day, as Shūichi and Makoto are walking to school, they notice several boys commenting on how they can see bra lines through girl’s shirts.  Takatsuki runs past them, saying she’s late for practice, and as she runs off, Shūichi notices that she’s wearing a bra too. 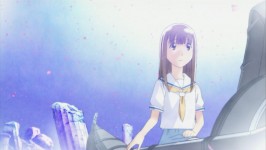 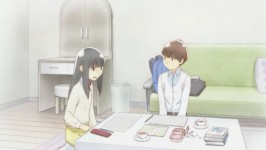 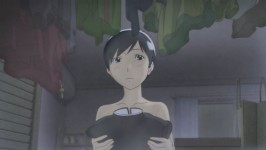 Opinions: Even though it’s only the third episode, I can’t help but feel drawn to the characters and their problems.  Maybe it’s because I’ve gone through the changes they’re experiencing and I  know how it feels.  Maybe it’s because the story is just so well written that it’s guaranteed to be cheering for them.  Either way, I’m eagerly waiting for the next episode to see not only what problems they’ll be dealing with next, but also how their play will turn out.