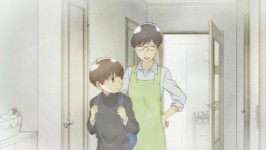 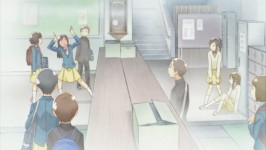 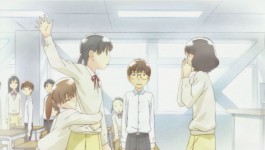 Again, Wandering Son addresses the issue of relationships between children as they hit puberty in a compelling and lovely way.  This week we get a look inside the character’s relationships with each other, as well as how they perceive one another.  The episode opens up much like it did last week, with someone sitting at their school desk and confessing something, although this time it’s Saori.  She confesses that she was the one who originally noticed that Shūichi could dress like a girl and not be noticed and how Takatsuki didn’t at first.  She then appears to be bitter and a bit jealous as she reveals that she hates how close Shūichi and Takatsuki got and how she’s confused that they could become so awkward around one another, yet patch things up before she could even blink.  As we join the crew, Shūichi’s mother is packing his sister’s lunch in his bag, asking him to drop it off for her at lunch time since Maho ran off before she could give it to her.  He agrees, although reluctantly since he’s nervous about entering the junior’s classroom.  On his way out, he pauses to look at his mom again before heading off to school, mentally noting that she hasn’t noticed anything different about him.

Once he arrives at school and meets up with Takatsuki, we hear a junior asking Chizuru if she was the freshman who wore a boy’s uniform to school the day before.  She says that she was and we suddenly hear some yelling.  Apparently Chizuru pushed the junior away, declaring that she’s stronger than her.  She then flushes bright red and runs away once she notices that people are staring at her, her friend Momo close on her heels.  Shūichi isn’t sure what to make of it, and neither is Takatsuki, and the two head off to class.  On their way there, they pass by Saori who doesn’t even look at them.  Instead she merely says “filthy” and makes her way past the two, leaving Shūichi and Takatsuki thoroughly confused.  We then hear Saori’s thoughts as she makes her way down the flight of stairs; she admits that she hates everything and everyone, although we’re not sure why she feels that way.  She pauses as a pair of juniors point to her, sending her dirty looks, but she makes her way past them.

Back in the classroom, everyone picks numbers for their seating arrangements and it turns out that Shūichi, Takatsuki, Chizuru and two other students are in a group together.  In order to pick a leader, Chizuru suggests rock-paper-scissors.  Takatsuki smiles because she’s in the same group as Chizuru (in the previous episode she confessed that she thinks Chizuru is really cool) and Shūichi notices that she’s smiling.  He then turns his attention towards Chizuru, noting how she refers to herself as “Chi-chan” and he mentally admits that it’s kind of cute and smiles.  Takatsuki notices that he’s smiling as well, which makes me wonder just how in-tune the duo is with each other.  Their small group is broken up as they hear Momo yelling at Saori to stop making fun of Chizuru.  Saori says that she wasn’t making fun of her, only saying that she was weird.  This escalates into would could become a small fight if Sasa hadn’t grabbed Saori, keeping her from hitting Momo.  Momo asks Saori if she’s going to hit her, but Saori says no, lowers her hand and storms out of the classroom. 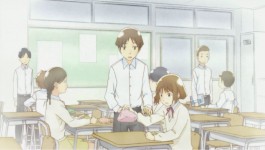 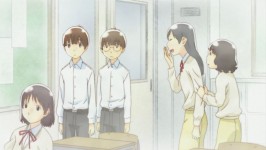 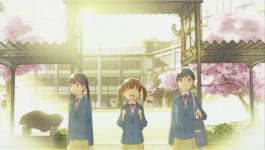 Later that day, Shūichi brings his sister her lunch and Maho thanks him before shoving him out of the classroom and slamming the door shut when she overhears some of her classmates commenting on how cute her brother is.  She slams her bento down and a boy walks up to her (I’m assuming he’s her crush or something) and tells her not to take it out on her bento.  This causes her to repeatedly slam it onto her desk in anger/frustration.  As Shūichi is heading back to class, he bumps into the two juniors who gave Saori dirty looks earlier and they ask if he knows what class she’s in.  When he finally gets back to his classroom, Saori is being confronted by the two juniors; apparently she snubbed them by not saying hello earlier that morning.  She says that she had said hello, but they hadn’t heard her before excusing herself to look into a club she’s interested in.  After school, Takatsuki finds out that Sasa is going to be joining the volleyball club with Saori and is a bit disappointed that her friend won’t be on the same team as her.  As she’s waiting for freshman to be called in for try-outs with Chizuru, Sasa and Saori run up, thinking they had called for the volleyball team.  Unfortunately, the basketball and volleyball clubs share the gym for practice, so Sasa is stuck between two of her friends and unsure of who she should talk to.

After practice, Sasa suggests that the three of them walk home, but when Saori refuses to, she becomes frustrated and runs off after shouting at them and saying that until they can learn to get along, she won’t talk to either of them.  Takatsuki asks Saori if she can let the past go so that Sasa won’t be angry anymore, but Saori again refuses, saying that Takatsuki feels the same way about her that she feels about Takatsuki.  Meanwhile, Shūichi gives Makoto a matching clover hairpin to thank him for being such a good friend and not judging him for dressing like a girl.  Makoto asks if it’s weird for him to be attracted to boys, but quickly changes the subject and mentions Saori and Takatsuki’s odd behavior.  He then says that he feels sorry for Saori since she seems to have a hard life.  Shūichi contemplates this for a minute, wondering how hard her life really is.  Meanwhile, Takatsuki is at home and thinking about something that happened nine months ago between her and Saori that led to their feelings towards each other today.  In a short flashback, we find out that shortly after Shūichi confessed to Takatsuki, Saori visited her house and confronted her about it.  Takatsuki is furious that Shūichi told her, but Saori says she forced it out of him because she confessed to him too.  She then tells Takatsuki that she hates her.  Angry and frustrated, Takatsuki tells Saori that she hates her too and that she’ll never be friends with her again.

The next day, Takatsuki stops by Sasa’s house to walk with her to school only to find out that Sasa left early that morning and is probably already at school.  When she gets to school, she finds Shūichi and Makoto and tells them about Sasa.  Makoto suggests that she patch things up with Saori, because then Sasa wouldn’t be so upset with them.  Before class, Makoto and Shūichi find Sasa hiding out in the nurse’s office.  She admits that she was caught up in the heat of the moment, but it’s hard for her not to say anything to either of her friends since they’re all in the same class.  After school, Takatsuki approaches Saori saying that she shouldn’t go home alone since the juniors from the previous day are likely looking for her.  Makoto goes to find Sasa now that they’ve agreed to walk home together (and skip their clubs) and Chizuru asks her if she minds if she tags along.  Takatsuki says it’s fine and Momo then complains, saying that if Chizuru’s going, she’s coming with too.  As the group heads out of school, Sasa – who is in much higher spirits now that Takatsuki and Saori have made up – suggests they all get ice cream.  Once they’ve picked out their flavors, they head to the park to eat them.  As they’re talking, Saori reveals that she didn’t say hello to the juniors and lied to them the other day to get out of a scuffle.  Sasa says that she’ll go with her to apologize the next day and Chizuru starts laughing hysterically at the situation.  Makoto leans over to whisper to Shūichi, asking if he’s fallen any harder for Takatsuki.  Shūichi says he has. 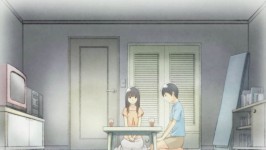 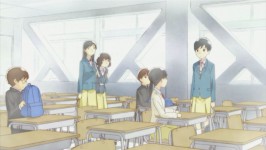 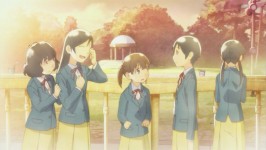 Opinions: Another wonderful episode that touched on a lot of different things.  It reminded me of when my friends started fighting in middle school and I was put in Sasa’s shoes (not the fondest memory, but whatever.)  I was happy to see that there was a happy ending this episode, although I have a feeling that Takatsuki and Saori aren’t done with their hatred towards each other.  Also, Momo’s continuous whining and obvious jealousy whenever Chizuru starts talking to someone else or hanging out with someone other than her is getting a bit annoying, but I have a feeling that she has an insecurity about something, so maybe it’ll be addressed soon?  This show is definitely owning up to what it promised in terms of addressing concerns and issues that young teenagers deal with on a daily basis.  Definitely one of my top favorites for the season so far.