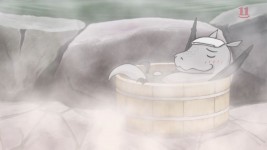 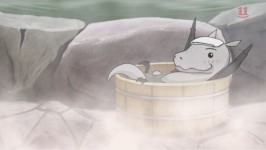 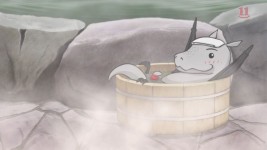 Thankfully, this episode wasn’t nearly as mind-boggling as last week’s but unfortunately, it still made my head hurt.  This week the group is at a hot spring resort and according to Nyaruko, she’s been waiting for this episode to be made since it’s only natural for a show that airs late at night to have episodes centered around hot springs and women in baths.  We then hear Atoko mention something about deceiving the viewers while Nyaruko screeches about Nyarle’s breasts being larger than hers.

Nyaruko then decides that Mahiro should join them and shouts across the wall separating men and women, telling him to join them because “I’m young and soft now~”  Mahiro shouts back that he’ll never take a bath with her and suddenly Cthuko starts rubbing up against Nyaruko.  Nyaruko yells at her, telling her to “stop getting aroused” on her back and Atoko then tries to get either Cthuko or Nyarle to spend some time with her in a corner of the springs.  While all of this is going on, all we see is their dragon sitting in it’s own little tub. 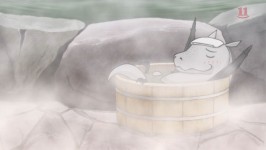 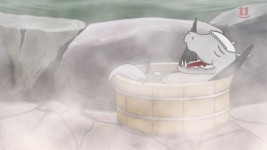 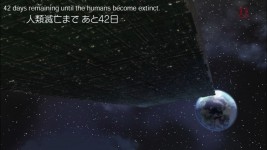 Opinions: Still confusing, yet nowhere near as bad as last week’s episode.  I honestly felt like it was a bit of a cop-out on the animator’s part to just show the dragon and nothing else, but whatever.  I’m still not sure what’s up with that brick hurtling towards earth though.  My mind: it is boggled.