Index begins it’s second half with an odd combination of a new ED theme and an absent OP theme. Things are changed around a bit as Touma and Index head to Italy. The new arc, looks to be a bit interesting, even if its… once again, More Roman Catholic Church versus Anglican Church stuff creeping in.

Before I get to my episode rambles, I’d like to point all you lurkers (because I know a lot of people read these reviews but don’t post comments) to a blog that is definitely worth checking out for Toaru Majutsu No Index II. One of the sites we link to in our blogroll, Byakuya’s White Night, has extremely detailed reviews on the series each week. What’s so great about our dear friend Kairi’s work there, is that she’s read the original Toaru light novels, and so a lot of her posts put things into context and fill in the holes. Definitely give her blog a look! You’ll learn a lot, I know I did! XDD

Okay… so that done, lets get to the latest episode. The episode started off with Touma again complaining about his “misfortune”. Sometimes I question how misfortunate he really is, but I gotta cut the guy a break this time, as he did have a bit misforunate. One thing that made the MikotoxTouma shipper in my squeal in delight (and I don’t squeal… ever) was none other than this near the very start of the scene: 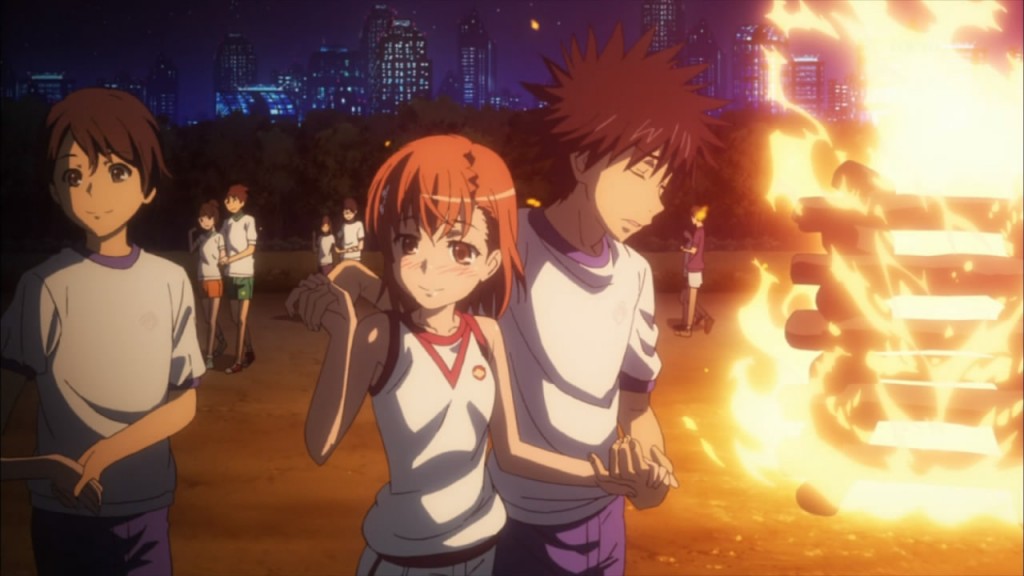 Poor Touma, he proceeded to get drop kicked by Koroko, cause we all know how posessive she is of her “onee-sama”. He also got headbutted by Fukiyose after she recovered, and then got whacked by a rubberball  from Himegami XD

Of course, all that was contrasted when he won a trip to Italy. I think the sudden change of location was a bit odd, but it was a welcome change none the less. After basking in the Academy city culture, and generally because I rather disliked the previous arc, we definitely needed a chance of pace and a change of place to get things going again.

This episode had a good dose of hilarity in it. From Touma realizing he did indeed have a passport, to Index being stopped at customs because of her pins XD. There was even stuff like Orsola thinking of threesomes with Touma and Index, something that really made me question what kind of a nun that woman is XD

I think one of the things I’ve been doing throughout my tenure of blogging Index II, is pointing out a lot of the bad parts of the show. Well, if there’s one thing I’m going to change from now on, its that I’m going start pointing out some good things as well. One thing I rather enjoyed and even was impressed with this episode, was the art direction and feel for the Italian town of Chiogia. Definitely very good looking, distinct environment art, setting it quite apart from the futuristic looking academy city:

Definitely some gorgeous looking stuff, during the night and the day. It can’t be said enough, but the art direction and animation for this series is spot on. Its only the writing that can sometimes make me wonder why all things can’t be super perfect XD

Speaking of Art, we also got a nice dose of fanservice this episode, as I think J.C staff decided they had gone on without a shower/Touma running in on someone changing scene for too long. Touma ended up going for a double knockout, choosing to go into one of two doors, thinking one of them must not be a bathroom. Of course, both rooms were bathrooms and hence “Touma had another dose of his misfortune”. See… this is one of those times where I think he should stop complaining, and just enjoy what happens to him, getting punched afterwards. I mean… we all know and even he knows he’s going to get punched, why fight it? XD

So Touma got to see both Orsola and Index practically naked. I’d think Index would be used to it by now, its only happened 20-3o times now XD. The real killer though, was Touma’s realization as he walked into the bathroom that Orsola was in: 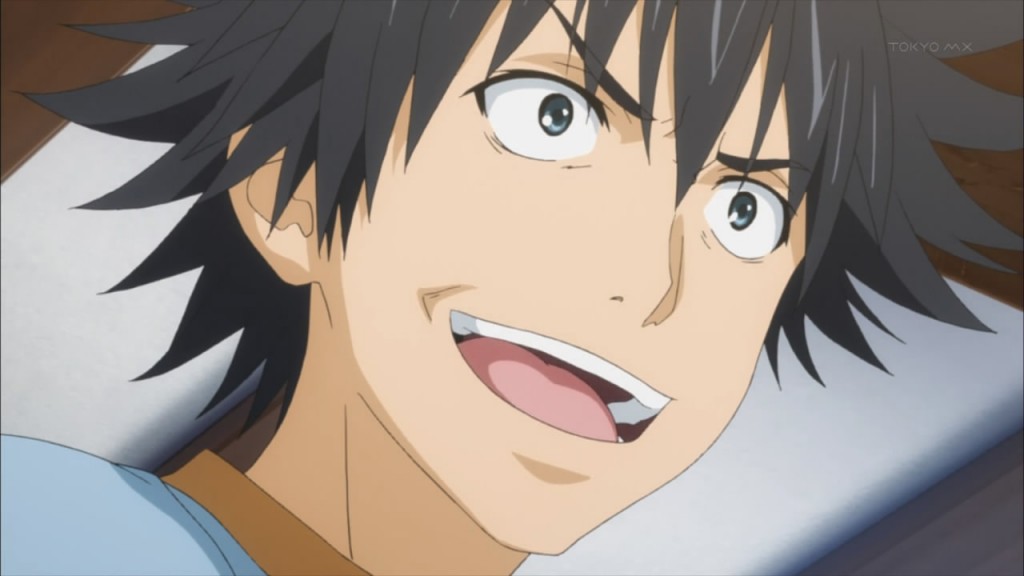 “Why Didn’t I think of the Simple Solution of Knocking to check?”

Honestly, if Touma hadn’t mentioned that, I would’ve sure as hell pointed it out XD I think some of Touma’s misfortune can be largely avoided by him just being careful and using the thing we call common sense. Also… Index and Orsola could’ve just… you know, lock the doors like normal people. XD Of course then we wouldn’t have gotten all the fanservice.

Namely, a shot of Orsola’s entire body from the back, a similar full body shot of Index, and even a weird sheepish “hide behind the curtain” post from Orsola. God, J.C Staff definitely wanted to make up for the last 2 episodes of mostly non-fanservice XD

And while we’re on the topic, I do like that the fanservice in Index, while sometimes a bit much, has a point and a purpose. We don’t see an abundance of it, like we would in say… shows like Ikkitousen, where the clothes are being removed every few seconds. I think that’s what largely makes these small little doses work, and not turn this into a ecchi perverts show XD

With that said, it seems like wherever Orsola is involved, the Roman Catholic church is close behind and ready to cause problems. Touma and Orosola get swept up into some big rather grand looking ship made of some green crystal. The most interesting tidbit though, is when Touma finally ends up meeting Aganese again.

I knew she was too much of an important character to have just had one arc. I dunno why, but it feels too recent and soon to have another arc with her in it. Hopefully they will flesh out her character this time, and not have it so she’s the cold-hearted annoying bitch she was in the last arc. Here’s to a good new arc!

I can definitely say I LOVE this new ED. Being one that loved the original Toaru Season 1 OP, and all the Season 1 EDs, and then of course, the Toaru Railgun OP/EDs, I’m glad to see some good music coming in. I definitely think that the animation is nothing amazing, but then again, EDs never really need or have too cool of an animation anyway. I think the song is a nice, delightful, soft and bright way to close off Index each week. Props for getting it right.

I hope the new, eventual OP is as good as this, and not something like that we got at the beginning of this season.

Agnese may not be the villain in this arc. Looks like the Amakusa are involved somehow too, its going to get intense next week! 😀