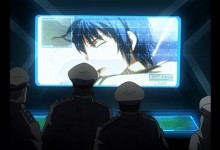 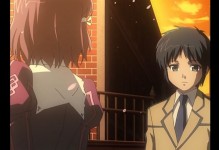 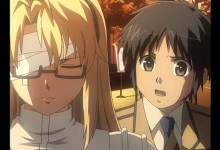 Once again, I’m dazzled by the animation and almost eerily fascinated by the amount of nudity in this show.  We start where we left off last week: Bridgette getting molested by Kazuya, who thinks that Bridgette is his late sister, all while Bridgette is in the middle of a fighting tournament called The Carnival and facing her bitter rival Genessa Roland (that pig-tailed girl from last week.)  While all this is going on, we get a peek at the control room where The Carnival is being observed and because of Kazuya touching Bridgette and releasing the Freezing command, she’s disqualified and the victory is given to Genessa.  Because of this, Bridgette is removed from her position of first in the sophomore year and the title is given to Genessa.

Kazuya is then escorted towards the dormitories and the registration building by Chiffon (the student council president) and her assistant.  Chiffon informs Kazuya that he should stay away from Bridgette despite his determination to apologize to her for causing her to not only lose the match, but also to become injured.  When he asks why, Chiffon tells him that there are rumors that Bridgette was given the nickname “The Untouchable Queen” after attacking (and possibly killing) several Limiters and Pandoras at the East Genetics academy, prompting her to transfer to their current location, the West Genetics academy.  As she’s explaining this, her assistant notices Bridgette exiting a nearby bus and frantically tries to gain Chiffon’s attention before it’s too late.

Just as Bridgette is passing by the small group, Chiffon jumps back – as if she’s scared of Bridgette – but Kazuya takes this and an opportunity to apologize.  Bridgette attempts to simply walk past the small group, but Kazuya chases after her and suddenly tells her to wait and hear him out before grabbing her arm.  This shocks Bridgette and she seems to have a flashback of herself as a small child crying while on a hill before she panics and snatches her arm away from him.  However, this causes her to stumble backwards and because of her injuries, she falls and her glasses skid across the ground.  As she searches for them, Kazuya hands them to her, smiling when she merely stares at him.  He tries to apologize again, but is unable to get the words out because at that moment, Bridgette stands up and attempts to leave again.  When Kazuya tries to grab her arm again (you’d think he’s learn that she’s called Untouchable for a reason!) she summons her Volt weapon and turns on him.  It’s at this point that Genessa appears. 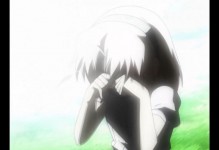 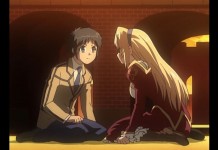 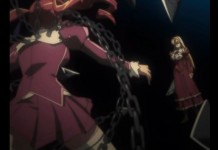 Genessa taunts Bridgette about her loss in The Carnival which visibly angers Bridgette.  She then chides Bridgette for turning her weapon on Kazuya, saying that even if he hadn’t interfered, she still would have lost.  Bridgette glares at Genessa, who takes her expression as a challenge and despite Chiffon’s pleas for them to not fight, both girls summon their weapons and proceed to fight.  Bridgette seems to have the upper hand despite her injuries and makes fairly quick work of Genessa, all while a sizable crowd gathers to watch the fight.  Furious, Genessa refuses to be defeated and activates her Pandora Mode, something that is forbidden on school grounds unless it’s being tested or there’s a reason to activate it.

Bridgette is suddenly overwhelmed with Genessa’s spike in power and is captured by the chains flying every which way.  Genessa claims that she’s going to make her suffer and turns her chains into blades, slicing into Bridgette’s skin and destroying her uniform.  Worried for her, Kazuya runs into the fray, begging for Genessa to stop because she’s already won.  When Genessa slaps him, it seems as though Bridgette awakens from a stupor and activates her own Pandora Mode.  In a single swing of her blade, she not only frees herself from Genessa’s chains, but also defeats her.  Just then, two teachers appear and put a stop to the fight, telling Bridgette to disengage her Pandora Mode.  She does so and is summoned to the principal’s office for her punishment.  Just as Genessa is about to taunt Bridgette about this, she’s told to report to the office for her punishment as well.

Afterwards, Kazuya finally is officially transferred into the school and finds his dorm room.  Here, we meet his roommate Arthur Crimpton who reveals that he is also Genessa’s younger brother.  Kazuya seems shocked by this considering what she’s done to Bridgette.  Meanwhile, we see a mysterious woman clad in black lingerie who somehow got a picture (or rather, a hollogram) of Kazuya.  She licks her lips, saying that he’s a cutie who needs to be ‘baptized’ by the Limiter Hunter.  Whatever the hell that means. 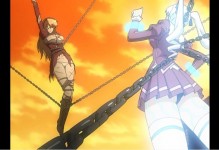 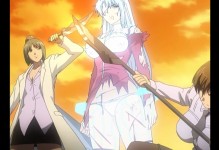 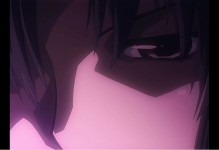 Opinions: While this episode wasn’t nearly as confusing as the last, it still kept the allure of boobs, blood and fighting.  We got a very small peek at Bridgette’s potentially traumatizing childhood as well as how she seems to be reacting to Kazuya and coping with the loss of her title.  It’ll be interesting to see what’s in store for Kazuya and if Bridgette will even take him on as her Limiter since she’s been known to disregard the need for one.  And who the hell is the lady in black at the end of the episode?!