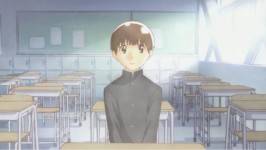 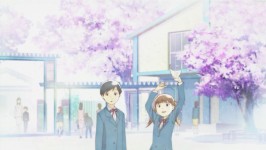 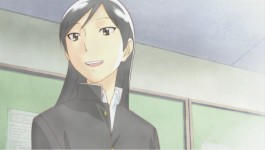 Needless to say, when I read the summary for this show, I was instantly interested in it.  Wandering Son (or Hourou Musuko) is the story about a young boy named Shūichi Nitori, who is entering his first year of middle school, and his friend Yoshino Takatsuki.  Nitori wants to be a girl while Takatsuki wants to be a boy.  The overall tone of the show is going to be about dealing with the changes associated with puberty, finding your gender identity and dealing with transsexuality.  While some people have condemned the original manga – written and illustrated by Takako Shimura – I feel like it’s a wonderful concept since there are so many people struggling with their own gender identity.

We start off the story with Shūichi sitting at his desk talking about his uniform.  He doesn’t like the stiff collar of the jacket and although he asked for a larger size, he still feels as though he’s suffocating.  He then asks what girls are made of, almost as if he hadn’t heard the well-known rhyme.  We then get to see his middle school, which is hosting it’s welcoming ceremony for the new students.  Here, we meet Yoshino and her friend Sasa who are looking for Shūichi while their mothers catch up on things.  Shūichi’s best friend Makoto is worried that he hasn’t shown up yet since the ceremony is about to start, but we find out that Shūichi and his sister Maho are being held back by their parents, who are still trying to get some pictures of them before the big ceremony.  They eventually make it to the school and catch up with their friends, many of whom are in their class.  While on the way to his classroom, Shūichi and Makoto bump into Yoshino and Sasa and it’s pretty evident that things are strained between Shūichi and Yoshino.

Back in the classroom, everyone is introducing themselves.  Here we meet a girl named Chizuru who is wearing a boy’s uniform and gets some strange looks from her classmates.  She doesn’t seem to mind and continues on with her introduction, ignoring the whispers floating around the classroom.  Shūichi is up next and in the middle of his introduction, the class starts asking him questions as to whether he really dated a girl in their class named Saori Chiba.  Saori isn’t pleased with the turn of conversation and ends up bashing the kid who initially asked the question in the head with her textbook.  It puts an end to the whispering and she storms out, pausing in the doorway to introduce herself.  Shūichi seems confused by this as well as a bit embarrassed that a girl stood up for him.  During lunch Shūichi and Makoto are on the roof and Makoto is commenting on how the upcoming year seems like it will be interesting.  He comments on how the teacher was late and how he doesn’t like how short the girl’s skirts are.  Shūichi doesn’t seem to be paying much attention until Makoto mentions Saori.  Then he becomes interested in what Makoto has to say. 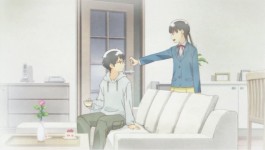 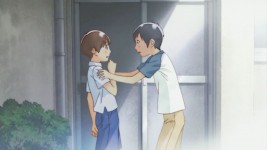 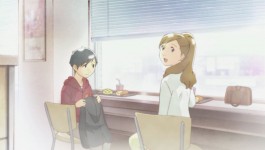 After school, we find Yoshino getting her things from her locker when Chizuru and her friend Momo show up.  Chizuru asks Yoshino how tall she is before telling her that she would be perfect for the basketball team.  Yoshino is shocked by the sudden invite and doesn’t say much before Chizuru runs off, reminding her to consider her offer.  Meanwhile, Shūichi and Mokoto are saying their goodbyes and Shūichi watches his friend run off before turning the opposite direction from his home.  We quickly find him going into a public bathroom and changing into a girl’s school uniform complete with wig and all.  If you hadn’t known he was a boy, you wouldn’t be able to tell the difference.  As Shūichi wanders around town, he becomes worried that someone might notice he’s not really a girl and calls Makoto for reassurance.  Makoto is surprised to hear that Shūichi is actually out in public dressed as a girl, but reassures him and says that no one will notice that he’s really a boy because he’s too cute.  Shūichi seems to gain more courage after this and proceeds to wander around town.  He remembers that he confessed to Yoshino over the summer but was rejected – which explains the tension between them – because she isn’t sure that she knows what love really is.  This thought seems to weigh on him as he makes his way around town.

Shūichi stops into a small shop and is told by the owner that he should by a four-leaf clover hairpin because it would look good on him.  Flattered, he buys it and heads back to the restroom to change back into his normal clothing.  Meanwhile, Saori is annoyed when she gets home to find a childhood friend (or fellow volunteer.  I’m not sure.) sitting in her living room, making himself at home.  The boy tells her that she shouldn’t be so angry all the time because she won’t be as cute once she starts getting wrinkles.  Irritated, she tells him that she’s not cute and pulls out a camera to show him a picture while stating “This is what ‘cute’ is.”  Later, we find out it’s a picture of Shūichi dressed as a girl.  Apparently that was the first time he ever really dressed like a girl and he continues to do so because of Saori and Yoshino’s encouragement that he looks good in girl’s clothes.  Meanwhile, we see Yoshino meet her mother for lunch (or dinner) and her mother gives her a gift.  It turns out that it’s a boy’s school uniform and Yoshino is thrilled because she thought that Chizuru looked really cool in her uniform.

Later that night, Shūichi goes into his room to find his sister and her friend looking at a magazine spread she did (Shūichi and his sister model.  Well, Shūichi used to model.)  Maho tells him that he needs to knock first, but quickly puts her things away and sets off to meet another one of her friends with her friend.  On the way out, her friend stops to take a photo of Shūichi with her cellphone before following Maho outside.  Once his sister is gone, Shūichi starts putting away his other outift, but notices an outfit hanging up on a hanger.  Deciding that he might as well try it on while his sister is out, he puts his wig back on and tries on the outfit.  As he’s twirling around, he remembers the hairpin he bought and goes to dig it out.  It’s at this moment that his sister barges back in, saying she forgot her cellphone.  They stare at each other in shock for a few minutes before she screams at him to take it off and calls him sick.  Shūichi pushes his sister, who seems to be more in shock that he actually pushed her than him wearing a wig, and takes off running down the street, still wearing the skirt.  He runs into Yoshino, who tries comforting him by giving him her hoodie, saying that she saw an upperclassman wearing a hoodie with a skirt and it looked kind of cool.

Shūichi accepts it and the two have a heartfelt talk, which alleviates any tension left over from earlier in the day.  Yoshino comments on how brave Chizuru is and how she wants to be more like her.  She then screams, letting out all of her frustration before telling Shūichi that they can do anything they put their mind to.  Later, Shūichi returns home and is apologized to by his sister.  Sort of.  She gives him one of her fried shrimp, which in a way is an apology (I would know.  I have 4 younger siblings.)  However, he dreams of Yoshino and wakes up with a start.  The episode ends with him washing his pajama bottoms which can only mean one thing: he had a wet dream about Yoshino. 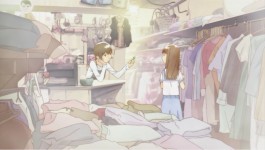 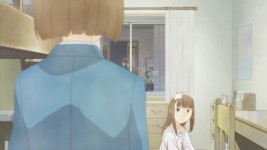 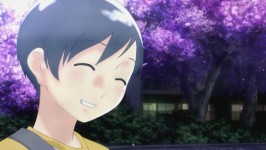 Opinions: Although this is such a touchy subject for many people, I think the animation studio (and even the mangaka) have gone about addressing it in a very tasteful way.  The animation is very pretty to look at – it almost looks like an animated watercolor painting – and the voice acting is terrific.  Judging by the first episode and the troubles Shūichi is already facing, I can only imagine how this will progress to address the remaining issues that Shūichi, Yoshino, their friends and family will have to encounter and deal with.  All in all, it’s a wonderfully pleasing start to a show and I’m eager to see the rest of it.