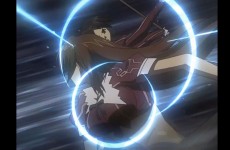 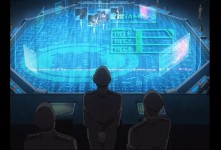 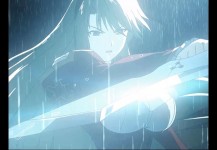 When we first saw the trailer for this show, we immediately got a Claymore-esque vibe, what with the heroic babes hacking and slashing away at each other.  And God damnit, we were absolutely right.  Freezing is about a futuristic Earth where the human race is being invaded by these aliens (or something) from another dimension called Nova.  Of course, women are the only ones able to harness the power to fight and destroy these things, so they then begin training young women from all over the world to become Pandoras.  These women are partnered up with young men (typically someone younger than they are), who are called Limiters, and together, they’re able to use an attack called Freezing, which limits the Nova’s movements.  Gee, does this sound like My-Otome and/or Neon Genesis Evangelion anyone?  Anywho, this particular story follows Sattelizer L Bridgette (whom I shall call Bridgette from this point forward), a powerful Pandora who apparently doesn’t like being touched, and her Limiter, Kazuya Aoi.

We start off the series seeing Bridgette stripping and preparing for what I’m assuming is a battle of some sort.  First thirty seconds of the show and we get side-boobage?  AWESOME!  Regardless of her stripping, she then summons/activates her armor, which is called Volt Texture and sets off to battle.  However, it appears that this battle – which we find out is called the Carnival and is really just a means of finding out which student is progressing the fastest or is the most powerful – has already started.  We see several nameless girls duke it out, each fight becoming more brutal that the next.  Seriously.  Getting a solid steel chain and ball to the ribcage?  That just looks painful!  While all this is going on, there are what appear to be military officers watching the Carnival progress from the safety of the command room.  But that’s not important.  What is important is the fact that Bridgette appears on the field and completely wipes the floor with her eleven – yes, eleven – opponents.  It’s here that we learn that her nickname is “the Untouchable Queen.”  And rightfully so.

While the Carnival is going on, there are still classes being held and we meet Yumi-sensei, a former Pandora.  She calls on a student to define what it means to be a Pandora and we learn that basically, they’re imprinted with stigma and “mount volt textures” into their bodies, which enables them to have heightened stamina, strength, etc., which is needed in order to fight the Nova.  In other words, with the help of the volt texture and stigma, they’re able to achieve super human levels of strength and such.  After the girl’s explanation, the class begs Yumi to tell them of her own tales when she was a Pandora and she agrees.  We then get a nice little flashback that’s scattered throughout the rest of the show, which just further sets the tone for the show.  During her story, we find out that she was battling against a Nova when her entire force was decimated by the Nova.  And I don’t mean that they got hurt a little bit and had to retreat.  I mean they got slaughtered.  Most of them died, but we also get a shot of a girl who’s leg was sliced clean off screaming in agony and then we see Yumi who’s arm literally looks like it’s torn in half.  She’s in shock for a moment before she starts screaming in pain as well. 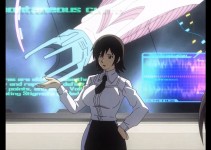 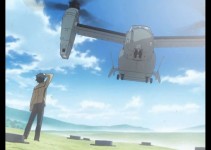 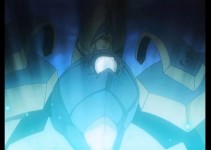 As Yumi continues her story, we get a brief glimpse at the hospital wing where the defeated Carnival contestants are brought.  There’s a lot of screaming, blood and shouting by the medical staff.  This is how we learn that by recovering an injured part of the stigma and/or volt texture, it’s possible to completely stop or reverse a wound from occurring (which is apparently what happened with Yumi’s arm since she very clearly still has it.)  Meanwhile, we meet Kazuya Aoi, a young boy being brought to Genetics Military School to become a Limiter for one of the Pandora there.  We get a small flashback of him begging his sister not to go off and fight and judging by the small dots on her back, she’s a Pandora.  Just then, a helicopter arrives and picks him up to transport him to the school.  It’s there that he meets the Student Council President and learns about the abilities of the Limiter.

However, as he’s being transported to school, Yumi finishes her story and it turns out that Kazuya’s older sister was the one that defeated the Nova, sacrificing herself to save the rest of her team.  It’s obvious that Yumi is still upset that she lost a friend and comrade, but tries not to let it show too much.  Meanwhile, Bridgette is still duking it out with the other finalists of the Carnival, but she defeats them easily.  While she has one of them pinned against a wall, the girl tries to reach for her, but Bridgette grabs her wrist and snaps the poor girl’s arm in half after saying that no one will ever touch her.  In come the upper classmen, who decide it’s time to show Bridgette that she’s not the most powerful girl in the school anymore.  As Kazuya is being shown around the school, the upper classmen (the one with red hair up in pigtails) comes crashing down through the ceiling with her boobs hanging out because Bridgette decimated her school uniform.

Kazuya is slightly embarrassed to see her, but his embarrassment is quickly forgotten as Bridgette comes into the room.  From behind, she looks exactly like his late sister and so, without thinking, he runs towards her, crying out that he knew his sister was still alive.  Bridgette is caught off guard by this and stumbles to a wall, Kazuya still clinging to her and now burying his head in between her breasts, sobbing about how much he’s missed her.  As the student council president watches in awe of Bridgette’s seemingly girly actions of blushing profusely and pulling her skirt down, the upperclassmen decides to take advantage of Bridgette’s moment of weakness by launching an attack on her.  However, something odd happens and it looks like Kazuya has already found himself as  Pandora’s Limiter!  Just as this happens, we see a blood splatter against the wall and the episode ends. 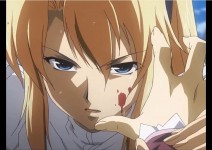 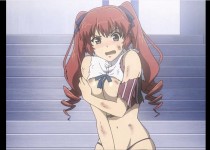 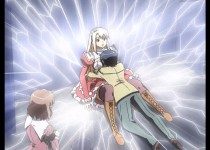 Opinions: For a first episode, this definitely kicked off with a slap to the face.  Nudity, gore, blood and even the little “Onee-san” twist with Kazuya mistaking Bridgette for his late sister had me staring at the screen in shock.  While it does seem reminiscent of My-Otome and Evangelion, it brings it’s own twist to the story and I’m totally ok with it.  Although all the information given to us was a bit confusing and overwhelming, it’ll likely make sense by the end of the series and only makes me want to watch more to find out what the hell it all means in terms of our characters.  Plus, this whole Bridgette/Kazuya relationship already has me intrigued; will Kazuya continue thinking that she’s his late sister and break her of her cold-hearted nature or will Bridgette continue on the way she has?  This was definitely an amazing start to what I’m sure will be an equally amazing anime.