If there was ever a series which totally fit the bill of the Never Trust A Trailer trope, its this damned series. I remember seeing the trailer and being so amazed. It looked incredible – great character designs, good cast, fights, blood, gore, violence…incredibly orgasmic head bang worthy soundtrack. So I went to find the VN because I JUST COULDN’T WAIT for the anime to start in October. I played the game – LOVED the story, the characters, the music, the settings. And then finally October rolled around, bringing with it, the first episode of the series. 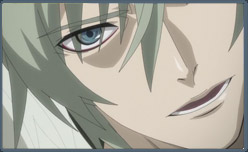 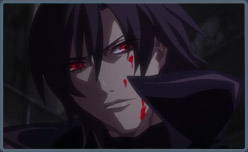 The story revolves around Akira, reigning undefeated champion of a street fighting competition known as Bl@ster. However, when he gets pinned with murder charges (and a LONG time in prison), he gets visited by the mysterious Emma. She offers him a deal – participate in the Igura tournament (where its kill or be killed) and kill Il-Re (the reigning champion and drug lord in former Tokyo aka Toshima) and his murder charges will be dealt with. Akira agrees and sets off for Toshima – not knowing that his puppy best friend follows him in the vain hopes to help him out. Once there, Akira starts to learn about various stuff – the mysterious and dead drug called Line,  the elusive Shiki, his own past and what lies in his blood.

Personally I felt that the overall pacing of the series was just flat out bad. We spend like 4-6 episodes just setting up the initial story. And then the pace is fine…AND THEN we get to episodes 9-10 when the plot just ZOOMS off into the sunset leaving the rest of us coughing its dust.And then there’s episode 12 where you should have the epic climax fight right? WE DONT GET IT. OR well its just not climatic or tense enough. You WILL be left with a feeling of “…thats it? THATS IT?” A horribly BLEH finale to a very disappointing show. 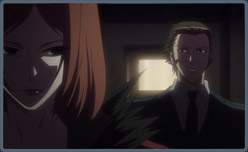 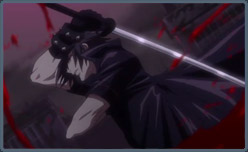 I wanted to cry at the snail pace of the initial episodes – they lacked the necessary ‘hook’ to reel the new fans in (WHICH is what A-1 was aiming to do…or so they say…). And I get that when you get near the end of a series, you get a lot of information but there is a proper WAY to go about it. The way the plot points were revealed in this series were just….too sudden and too much. *grumbles* I fail to see why they couldn’t have followed the manga’s story WHICH covers EVERYONE’S route and yet, didn’t turn out like this trainwreck.

Everyone got trolled – by everyone I mean every fan. Shiki lovers, Igura’s strongest charisma got turned into a weird, random slashing guy who in the end, has hygiene issues.  Rin fans, the last time we see Rin in the hospital? I’m gonna run away screaming now. Arbitro fans, that…hair…nuff said. ShikixNano fans, we didn’t get an awesome final fight between them. Rin vs Shiki, WHAT Rin Vs Shiki fight? Nano keeps shifting between pretending to be Tuxedo Mask, The Flash and Superman.

And I QUESTION the logic of just jumping behind a guy holding  a SWORD (while going “YAAAARGH!) when you don’t have ANY weapon. ARE YOU STUPID (or do you just have a death wish?) .  Why am I even trying to apply logic to this show? It fails totally at it…

Some of the characters really wound up with the short end of the stick in my book. Particularly Emma and Shiki. They didn’t even go into Emma’s back story or WHY she was so hell bent on killing Nano. They turned her into a run of the mill bitch villian who just wanted to kill Nano. Ah WHY couldnt you tell that Nano and her were involved back in the ENED days and that HE was the who tore her arm off? *eyes A-1 critically* Shiki…oh dear GOD Shiki. *whimpers* My favorite character in the game….and you got turned into this weird mysterious guy who just goes around randomly killing guys. He was just SO DAMNED OOC. There was so much more to him than what was shown in the anime! He wasn’t all just about greed and pride and revenge! 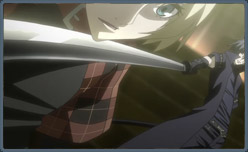 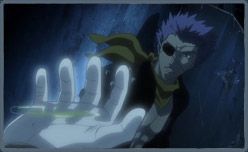 The animation values….were hiding in sheer terror behind the original VN. I could hear them whimpering at every episode’s “full moon shot”. No I kid you not. 13 episodes and EVERY NIGHT it was a full moon. WHY? I know that in the story the world went through World War 3 but did that war knock Earth of its axis or something that we got a full moon for like…5 nights in a row? I’m sorry but the moon doesn’t work like that! Major astronomy fail. And don’t me STARTED on episode 12! It was nothing BUT copy and paste and recycling of  shots from previous episodes! And it was as apparent as the nose on our faces folks. Though we did learn one thing…A-1 is pretty good at sky shots/pans. And they think that blood is a BRIGHT RED color….like ketchup. And that humans turns into blood fountains when cut : WE GET that its supposed to be a story with lots of blood in it but MUST you over exaggerate?

The production and presentation of the show is just….bad. Horrible dare I say. A LOT of times the sfx and the voices wouldn’t match with the animation, especially the final episode. The characters looked deformed in SO MANY places. EVERY episode had AT LEAST 5 animation and or production screw ups. The eyes were going squinty, Akira suddenly picks up 20 pounds and loses it within a span of 30 seconds, Gunji walking like a GORILLA, squinty eyes that are too long, side sweeping hair from HELL, HAIRY NIPPLE… Dear A-1, your idea of fan service is OH SO WRONG.

The ONLY two things that this show has going for it is the music and the seiyuu cast. But well the seiyuu cast is the same as the Visual Novel so all I can say is “good job on getting all the people back on board for this project”. The music, however, it wasn’t that bad at all. Nothing entirely too memorable but it does have its moments. Nano’s theme is haunting and dark, the OP takes some getting used too but when you do, its … good. I didn’t understand the logic of giving EVERY episode a new ED but I liked all of em (except one ^^;; ) But I still feel it would have been better to have picked the Grind remix or Curriculu Machine remix as the OP and keep the Still remix as the ED. And then spend the remaining money on better animation. I honestly don’t understand why we had to have 13 different ED’s! 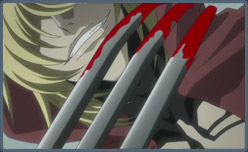 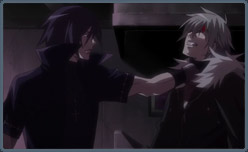 This was the first BL VN that I had played and the first shounen-ai series that I had been looking forward too….and i got MAJORLY trolled by A-1. You can bet yer favorite plushie that I ain’t gonna be trusting A-1 ever again and when I see their new release list – I will be eying it warily and MAAAAAYBE watching…but most likely I wont be. Because I had high hopes that A-1 would take this seriously – as serious as they took Kuroshitsuji and their other good titles. That we’d get the same level of dedication, seriousness and effort as the animators put into those series. But no…we get this pile of dung. Where apparently the last episode was put together a day before the broadcast date. Nice A-1…real nice.

I’ve heard rumors that we might get a Season 02. If you hear any loud chanting and prayers of “No season 2 no season 2” that’s just me. Good riddance to bad rubbish and I’ll be forgetting that this anime EVER came into production. I’ll be over here, replaying the VN and reading my ShikiAki doujins. We give Togainu no Chi a sad, pathetic D grade.