“Jellyfish? Fujoshi? Cross dressing? I dunno man…sounds way too eclectic a mix of things… And then finally the first episode came out. I found myself being so glad that I gave the show a chance. To me, Kuragehime was the dark horse of Fall 2010. Most underrated show of the season and a diamond in the rough. I really was disappointed to learn that this show was gonna have 11 episodes. It deserves at least 26. 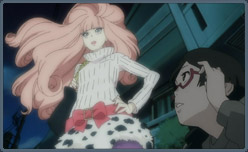 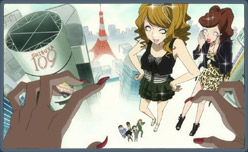 The story revolves around a jellyfish otaku, Tsukimi and her fellow otaku friends who live in the same apartment complex (with a no male policy). They pretty much stick within the complex unless need be but they have a SEVERE phobia against the hipsters or pretty girls out there in Tokyo. But things take a change when one night Tsukimi winds up taking the help of a very beautiful stylish hipster and subsequently inviting her back to the complex. The problem? SHE is actually a HE. And that’s how the ball gets rolling.

I think the best part about this show is that its a true blue josei title and not a shoujo title. So the usual shoujo intricacies arn’t there and you can just sit down, kick back and just enjoy. That’s what I used to do – Kuragehime was my weekly delicious treat. Another great point about this show is the characters. MY GOD. They’re quirky, they’re silly, they’ve got real heart to them and most importantly, they’re just so human. Every.single. character we’re introduced too are the kind you can either fall in love with or really quickly develop one emotion or another about them. And I do mean, every single one. The otaku’s are just…the quirkiest buncha people ever – being into japanese culture and dolls, trains, Records of the Three Kingdoms, jellyfish and old men XD And then there’s Kuranosuke, our crossdresser who is heavily into fashion (yet has no CLUE how you actually make a dress), determined, quick tempered and passionate to a fault. . . . and maybe a little dense but that kinda applies to everyone (and also a bit of an airhead actually). 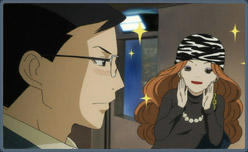 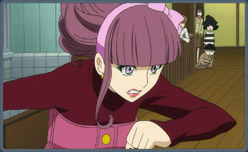 I promise you, you’ll be hooked on this show the second the OP starts. I mean, how can you NOT love a show whose OP has blatant references to Star Wars, Mary Poppins, Singing in the Rain, James Bond and Close Encounters of the Third Kind? And The ED is pure love. LOVE LOVE LOVE. Sambomaster’s ‘Kimi no Kirei ni Kizuite Okure’ is one of the more heart warming songs that I have heard in a while with lyrics that make me wanna sing the song at the top of my voice (but I dont cause I’m horribly off key). The seiyuu choices were excellent (and im just not just saying that cause I’m a Junichi Suwabe fan!). Kana Hanazawa brings Tsukimi to life with her voice while Mitsuki Saiga puts the real kick in Kuranosuke’s character. Though I think the seiyuu to be given the most credit has to be Akemi Okamura who makes Mayaya (Record of the Three Kingdoms otaku) OH SO REAL.

The character designs stay VERY true to the manga and the animation is pretty good all things considered. But this is one show that I didn’t watch for the art. I watched it for the characters (and the music). I think that another good point about the show is the art though – the character designs are not your usual shoujo style and have a hint of old school feel to it. And dear GOD I WANT THOSE WIGS that Kuranosuke wears *whimpers* they look so pretty…Oh and another good point about the show? The episode ‘half-time’ XD Clara (mascot jellyfish) comes onscreen and says in her cutesy voice “CM desu~” (‘Clara~’) and then “Second half~” (‘Tequila~’) I dunno WHY the other voices say tequila but it had me in stitches the first time I heard it. I was like “yeah THAT is how these half time episode thingies should be!” 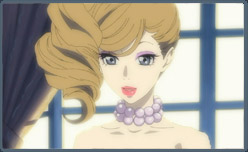 To be honest, I’m hard pressed to think about any con’s for this show. At best what I can think is that the animation quality sometimes goes down a tad but then it kicks back up so I barely notice that. With a nice gentle and completely unforced pace, the show is both fun and unique and this quality holds for every episode, all the way to the end. While at times some of the characters can be…a TAD over the top *coughMayayacough* but you still can’t help but love them even more for it. The thing about this show is DO NOT go on first impressions when you read its summary. It sounds weird, the character names make you go “HUH?”, you want to push it away thinking “Fujoshi? AH DONT THINK SO.”. You gotta ignore that and just watch the first episode…by then, most likely, you’ll be hooked.

I would AND DO recommend this show to anyone who asks for a recc and tell them, “Screw what you’ve heard about its story and just watch it. Trust me.” A definite MUST-WATCH show if you like an anime which is light but with an underlying depth and has a great character cast and is visual candy. We give it an A Grade!