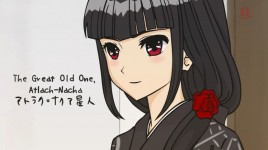 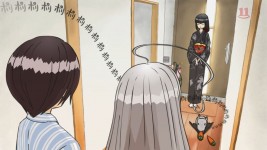 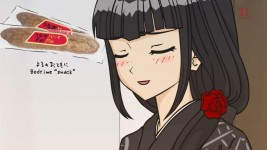 Once again, this show proves that there’s some really weird shit out there.  We finally learn the name of the girl in the kimono this time; her name is Atoko and apparently she’s yet another diety that Mahiro is housing.  Nyaruko seems to be annoyed by her (although maybe she’s just always annoyed in general?) and introduces Mahiro to Atoko, but warns him not to be too lax about her since she’s known to become a trickster at a moment’s notice.  Atoko then starts talking about possibly having a midnight snack with Mahiro, but Nyaruko puts her foot down, stating that she’s been promised to Mahiro (insert him angrily denying that statement) and no fiance of her’s will be having midnight “snacks” with anyone but her.  As noted by the small image above Atoko’s head, shes was likely referring to having eel cakes or something similar as a snack and becomes rather upset about this.

However, her depression is short lived as the pink-haired girl WHO’S NAME I STILL DON’T KNOW appears.  Her attention immediately flocks to her, and as she grabs the girl’s hand she tells her that she’s cute and that they should take a bath together.  The episode ends with Mahiro asking Nyaruko if he’s allowed to “punch her.”  Nyaruko agrees, but I’m still not sure which one he’s referring to… 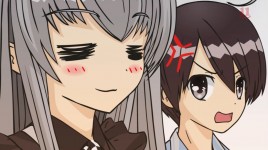 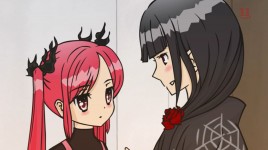 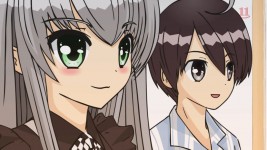 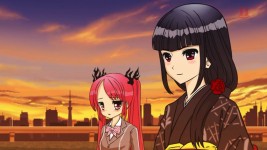 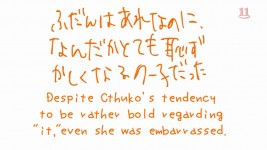 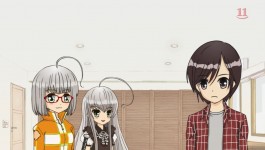 This time, we see Atoko and the pink-haired girl, who we now know is named Cthuko, walking down the street.  Atoko then begins asking her a series of questions involving long, drawn out bleeps, which can only mean one thing.  She’s talking about something naughty!  Cthuko becomes more and more embarrassed as the conversation continues, which is somewhat cute.  Meanwhile, Nyaruko is introducing Mahiro to her friend Nyarle, who is also an Outer God (or something along those lines.)  Nyarle seems to be quite smitten with Mahiro, even resulting in having “bishie visions” of Mahiro smiling at her.  This causes her to go into a spiral of self-doubt as to whether a God can be with a human.

Mahiro idly asks Nyaruko why Nyarle is carrying/waving around a bat and she comments that Nyarle has always been athletic and it’s just how she is.  Of course, while this is going on, Nyarle is in the midst of spontaneously combusting into something red, tentacle-y and heavily blurred out.  Mahiro asks if Nyaruko will be able to fix her and Nyaruko shrugs. 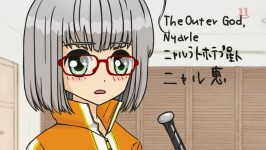 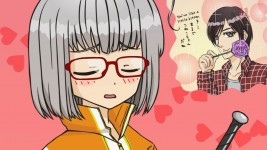 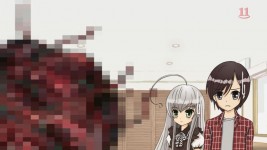 Opinions: Both episodes had their merits in the fact that we finally got to know all of the characters, although neither of them seemed to correlate with each other, let alone allude to an actual plot-line of something.  Some parts were highly amusing (most notably would be Nyarle’s combustion) but the rest of it just left me horribly confused.  The only thing I can see tying these episodes into any sort of actual plot is the fact that at the end of every episode, we see some large brick hurtling towards Earth with a countdown to the human’s destruction.