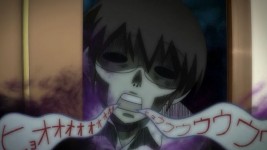 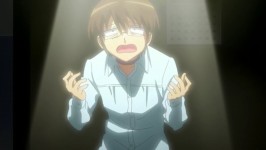 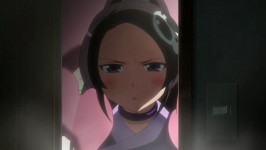 As I’m sure most of you know, this is the last episode of the season and in a way I’m glad it didn’t focus on a conquest or anything related to that.  Instead, we get a real look at Keima’s skills as a gamer and “God” of dating sim games.  The episode starts off with Keima returning from a video game store laden with packages.  He looks around his room at the stacks and stacks of games he needs to beat and sighs, but he quickly becomes determined.  The next morning as Elcie is making breakfast, Keima’s mom comes in and thanks her for being so helpful before muttering about how she wished Keima was more like her.  Speaking of Keima, he drags himself into the room looking much like a zombie (enough so to cause Elcie to exclaim “UNDEAD”) before he yells at Elcie for causing him to have a backlog.  He then falls to his knees, declaring that it’s a disgrace for a gamer to have a backlog – something I took immense offense to since I happen to have a backlog of 40+ games (yes, I know. It’s sad.) – and then runs off to his room, stating that he plans on turning his God of Conquest mode on.

Scared for him, (and a bit curious, I’m sure) Elcie follows him before picking the lock on his door to peek inside.  Inside we see what could only be a gamer’s wet dream; stacks and stacks of Xbox 360’s, Playstation 3’s, Playstation 2’s, Nintendo Wii’s, NES, SNES, Atari…  Every gaming system imaginable.  Here is where things get interesting though.  As Elcie watches, she notices a table set up with several gaming controllers on and six, count ’em, six TV’s set up.  Although I’m sure this has to be terrible for his eyesight considering he’s in the dark, Keima then proceeds to play six games simultaneously.  Elcie watches on in amazement as she sees the true power of Keima’s conquest mode; his hands move so fast it looks like he has eight arms!  However, Keima begins talking to himself and Elcie exits the room, muttering about how he hasn’t been this creepy in awhile. 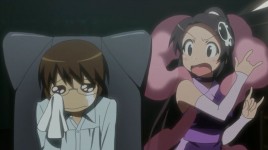 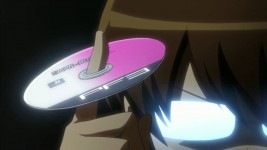 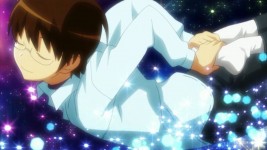 What I’m sure is several hours later, Keima has managed to beat five of the six games and is about to update his website when the effects of his “God mode” starts taking effect.  According to him, using this mode for an hour takes three years off of your life span…or you’ll at least feel so tired that it just feels like three years have been taken off your life.  However, instead of taking a break, he checks his e-mail and receives a plea for help with the game Princess Derby, so he pops that in and proceeds to continue playing despite his dwindling energy.  Later, he decides to pop in all five renditions of the game (apparently this game gets remade a lot) and ends up blowing up all five of his old, collector systems.  And yes, I screamed in horror at the sight.  Anywho, Elcie decides to check up on him again and finds him setting up twenty-four – yes, 24 systems – to play simultaneously before collapsing.

She catches him and as he wakes up, she begs him to stop before he really starts to hurt himself.  He ignores her and she voices her concerns about how he doesn’t have many friends and tends to stay inside playing games all the time.  Keima then confesses that he loves games so much that he really can’t live without them and that they bring enjoyment to his life more than any human interaction could.  Elcie leaves him to his gaming, despite being worried about him, and rightfully so in my opinion.  Several hours later, we find that Keima has caught up on three months worth of gaming but he looks gaunt and exhausted and seems to be hallucinating.  In fact, I’m pretty sure he’s hallucinating since all of the girls from the games he’s beaten pop out of the TV to cheer him on before inviting him into the “gaming world.”  We’re then greeted with some wonderful off-key singing courtesy of Keima as he dances around with all of his little game girls.  Sometimes I really wonder about his sanity… 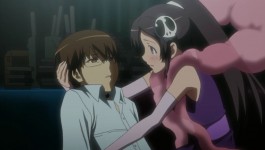 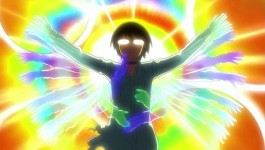 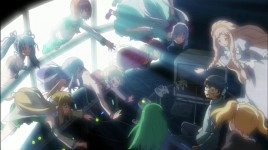 Opinions: For a season finale, it was a cute, light-hearted episode that gave a small peek at how skilled Keima is with games.  We got a decent amount of action from Elcie too, which was a nice little bonus.  It wasn’t a super spectacular finale, but it did leave it on an open note since it got picked up for a second season starting in April 2011.  How awesome is that? 8D  I’m super excited and hope that it’s as good as this first season.