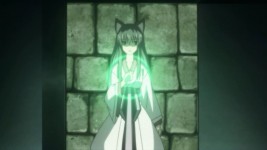 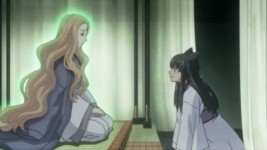 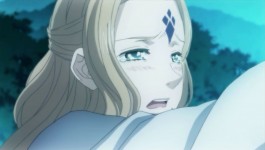 If this was one week I wish my laptop hadn’t needed repairs, this was it.  Although it wasn’t what I had initially expected, it was an amazing episode and it finally answered all of my questions about Zakuro’s mother and her connection to the Village of Oracles.  Before I get too ahead of myself, let me start from the beginning.  We find Zakuro still running away from the horrors of all of those half-spirit children being held in a cell when her locket that was given to her by her mother, starts glowing.  As if in a trance, Zakuro approaches a wall – or what appears to be a wall, since it’s apparently a secret door of sorts – and continues down the hall.  She regains some sort of sense of herself when she faces a bed, but she’s shocked to find her mother sitting before her.  Of course, she approaches her and reaches out to her, but instead of her mother’s warm embrace, she finds herself seeing all of Tsukuhane’s memories.  However, before we’re able to see such memories, we get a peek at Kushimatsu and the girls.  Amegaki is demanding to know what the Village of Oracles wants with Zakuro, and Kushimatsu reveals that it’s because of Tsukuhane.

Here’s where things get interesting.  According to Kushimatsu, Tsukuhane was quite the powerful maiden in her heyday and was chosen by the chief of the Village of Oracles to become his bride and bear his children.  She does bear him an heir; in fact, it’s Omodake (i.e. Hanadate) who is her first child.  However, after the birth, Tsukuhane is banished to the mountainside, unable to see her son or even hold him.  Kushimatsu is assigned to keep guard over her, which is how the two meet, and she watches as Tsukuhane is tormented with the fact that her husband continuously asks her why she hasn’t bore him a second child.  Tsukuhane has also taken a liking to climbing up a cliff that overlooks the village, so that she might feel a little bit closer to Omodake.  It’s here that she meets Enaga, a human from the nearby village.  He comments that she must be a heavenly creature since he’s never seen anyone quite as beautiful as her before.  Since her ankle became injured when she fell out of the tree that Enaga cut down, he binds it for her and the two of them appear to have some sort of romantic connection.

Tsukuhane then starts visiting Enaga in his village, helping them with the harvest.  He apologizes, but she tells him that she’s enjoying herself so there’s no need for him to apologize.  However, she then sees a man running around, calling for his wife, who appears to be spirited away.  Startled, Tsukuhane takes off towards the Village of Oracles, intent on asking her husband to release the woman.  As it turns out, the Village actually kidnaps pregnant women to perform the fox ritual, which will hopefully create a half-spirit.  The chief does see her, but demands to know why she’s come to the village and then scolds her for developing pity for such low-life creatures such as humans.  It’s here that she sees her son for the first time, but Omodake is sent back inside and Tsukuhane is sent back to her home. 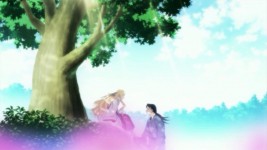 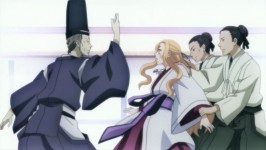 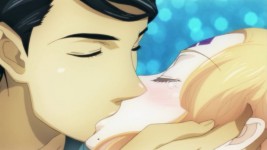 It’s then that Enaga notices that something is upsetting Tsukuhane and he tells her that she can tell him what’s bothering her.  She tells him that she can’t because she’s not like him.  Enaga then mentions the legend of the angel that descended to earth and had her robes stolen by a human so that she would be forced to marry him (Ayashi no Ceres is also based on this legend.)  He then chuckles, saying that humans are fools, but Tsukuhane disagrees with him, saying that humans are so full of life that she wishes she could be more like them.  Enaga then embraces Tsukuhane and kisses her, which pretty much seals their fate.  Tsukuhane gives herself to Enaga and becomes pregnant.  Just as she’s about to leave, Enaga finds her and tells her that they’ll leave the village and go somewhere far away so that they can be together.

Unfortunately, it never happens.  Just as he suggests it, he’s struck down by the chief’s henchmen and Tsukuhane is devastated.  He morbidly laughs as he says “this is what happens to humans who fall in love with heavenly beings” but Tsukuhane tells him that before she met him, she didn’t know what it meant to fall in love.  As Enaga is dying, she confesses that she’s carrying his child.  For a brief moment he looks thrilled, but then he passes, leaving Tsukuhane alone and unable to fight against the henchmen.  As it turns out, Omodake found her with Enaga and told his father about his wife’s infidelity.  Her own goddamned son!  I always knew he was a bastard.

As soon as Tsukuhane returned to the Village, they performed the fox ritual, which apparently they slay a fox demon and splatter it’s blood all over the pregnant woman.  My first thought was that it can’t be healthy for either the fox or the baby, but then I was just really grossed out.  Of course, this is how Zakuro is born and just as the chief orders for the child to be thrown in with the rest of the half-spirits, Zakuro’s powers become apparent.  Power hungry, the chief wants to use Zakuro for his own uses, but Kushimatsu was able to break Tsukuhane and Zakuro out before he could get his hands on her.  Kushimatsu then reveals that the locket Zakuro is always wearing was actually meant to hide her power from the Village, but as she grew older and her powers grew too strong to be able to contained by the locket.  Also, Tsukuhane apparently returned to the village in the hopes that Omodake – who had obtained power by then – would allow Zakuro to keep her freedom.  Meanwhile, Zakuro comes out of her trance to find Omodake standing behind her and he casts some sort of spell on her to make her fall asleep.  He then orders Byakuruko to be Zakuro’s maiden at the wedding ceremony, which is an honor for the half-spirit.  However, Rangui approaches Daidai, who is pissed off that her sister has been getting all of the attention lately.  I’m not sure what the demon is planning, but it can’t be good.

Finally, we see that the group has figured out how to get into the Village (Riken had kept a fragment of some sort of token that will allow them to get through the barrier) and are racing towards it.  Amegaki then resolves himself to telling Zakuro how he feels about her, regardless of how she reacts. 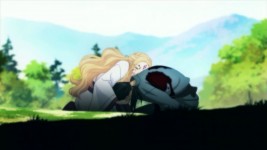 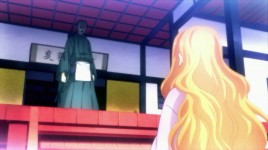 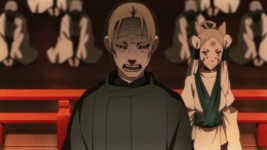 Opinions: Holy flying spaghetti monster! D:  This was an amazing episode!  I’m thrilled that we finally got to see Zakuro’s mother’s past and although I wanted to cry, it really filled in a lot of gaps as to what happened.  Amegaki’s determination to rescue Zakuro and tell her his feelings was endearing and I’m dying to find out if they’re able to stop this wedding that’s about to happen.  Plus, what is Rangui plotting?