By episode 10, Index II has finally found its groove, and each episode seems to continue the same quality that has been present since this arc started. I quite enjoyed this episode, even if I felt that it was kind of short. I’m sure quite a bit of content was cut out from the novels, and I’m wondering if Index would be better served as a 1-hour, 24 episode series rather than the current 24 minutes (Including the OP, ED and Preview XD).

That said, I had to laugh at how the episode starting out, with Frog Face Sensei going: “Who do you think I am?” in a rather manly voice. It was funny, because it was NOT the line I was expecting from him. I do agree that he’s a great doctor, and Fukiyose is in very good hands though. Its just… the minute he said that, I couldn’t help but recall Kamina from Tengen Toppa Gurren Lagann going: “WHO THE HELL DO YOU THINK I AM?”

The battle concluded, with Touma powering through, annoyed at how Fukiyose’s hardwork was falling apart, and the Festival was turning into a mess. Now… I’m against adding screenshots in the middle of reviews, but I think this time merits an exception, because Touma finished the fight with his trademark move: 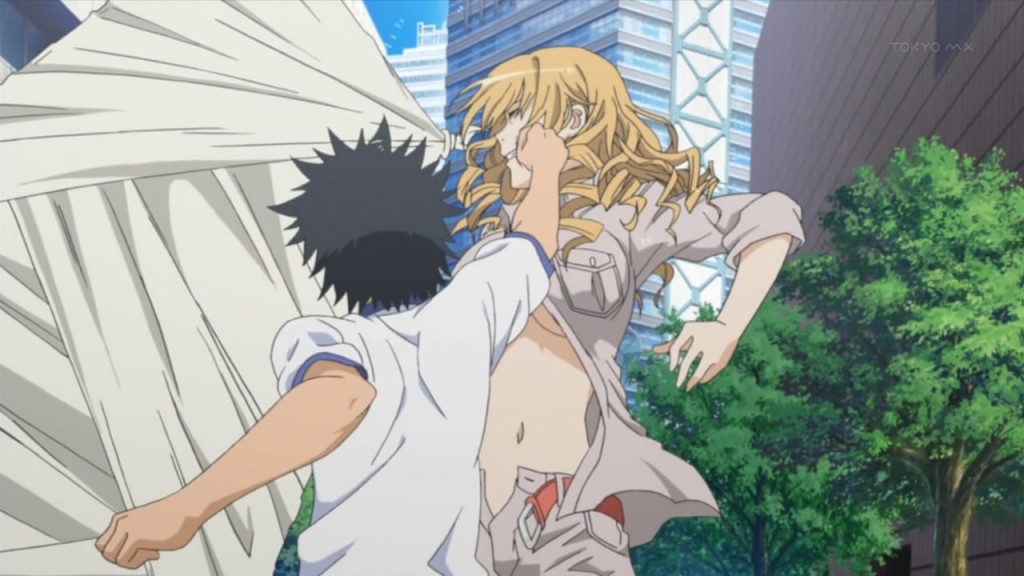 I think the fact that Touma openly punching every woman he dislikes is becoming a running joke for bloggers who blog this series. XD Although, The joke proceeded to be on Touma when all he was left with was a Candy store sign.

We got a bit of fanservice this episode again, as we saw Oriana’s shirt open up when she was knocked punched by Touma, and a “changing scene” soon after.

After Touma and co fail, the Angelican Church receives new information that makes the Stab Sword an even more dangerous entity. I find it interesting, and somewhat silly, that a cross can dictate who can own and control a piece of land, especially a huge chunk of it like Academy city. I do get the implications, and it would indeed overpower the Roman Catholic Church if they did have Academy city… but honestly… a FRIGGIN cross will allow them to do it? I just don’t see everyone bending over backwards just because of one cross.

It does raise the stakes quite a bit though. What I don’t understand is this whole: “Everyone will be happy” thing that Oriana and even Stiyl refers to. I’m sure we’re missing some vital piece of information that puts that whole phrase into context, because from what I know… Everyone being happy is a GOOD thing, balance of Science and Magic be damned!

With no leads to go by, Touma decides to meetup with Index and his parents for lunch. This indeed was a rather hilarious scene, mostly because Mikoto and her mom are there as well. I gotta be honest, Mikoto’s mom, beyond being a hot, young woman, is friggin funny and adds some good comedy to the mix. The whole scene with them running into Touma’s parents was awesome. I chuckled at the part where Misuzu Misaka asked her daughter to show some “appeal” to the parents of the boy she liked.

Of course, what was really interesting was the squabble that Index and Misaka had over Touma infront of both Touma’s parents and Mikoto’s mother. I am glad that someone FINALLY questioned the fact that Index hanging around Touma is kind of… weird. I wonder how everyone would have reacted if they knew that she LIVED with Touma in his small apartment.

The way they ended the episode was funny as well, and definitely surprising. It wasn’t exactly a cliffhanger, but I did see my jaw drop at the way this episode ended, followed by a “Really guys? Really?”. J.C Staff… I seriously love you guys XD

Seems like Himegami will be thrown into the mix of things. Also… It seems like Shirai is hell bent on getting her revenge on Touma XD