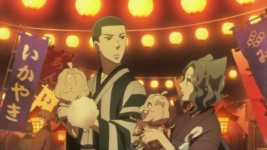 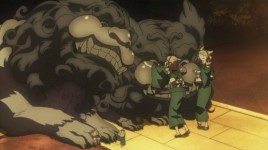 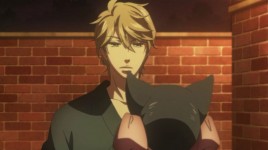 I thought that this week would be another cutesy, fluffy episode where we got very little plot development and tons of emotional development in terms of the characters.  In a way I was right, but I was also oh-so-very wrong!  We start off the episode with the boys waiting for the girls outside in yukatas and complaining that women take too long to get ready.  The girls arrive soon enough with the children in tow and Kushimatsu and Lord Amaryoju tell them to behave before handing each of them some pocket money.  Amegaki and Riken make the comment that they’re a little too old for pocket money, which I thought was hysterical.  Heading off to the festival grounds, we find that the humans are incredibly welcoming to the girls and the kids, which shocked me a bit.  They even gave the little ones free cotton candy!  Riken comments on this and Susukihotaru says that it’s thanks to Lords A and Um that the villagers are so welcoming to spirits and half-spirits like them.

As they head up to the shrine to pay their respects to Lords A and Um, the two large statues come to life!  Hozuki and Bonbori rush forward to pet them and the two spirits zero in on Amegaki hiding behind Zakuro.  They ask her, like everyone else seems to be doing lately, if Amegaki is her boyfriend or not.  As usual, Zakuro becomes flustered and indignant, denying all of it despite the spirit’s persistence.  They then inform Amegaki that if he ever makes Zakuro cry, they’ll come after him and rip him apart.  Or something.  Needless to say, Amegaki is terrified and is thankful that the group decides to try out the maze that’s set up on the outskirts of the festival grounds.  After declaring that it’s a race and the winner will get roasted squid on a stick – which sounds amazing, I might add – Amegaki whispers to Zakuro, asking if she wants to go with him as a pair.  She declines, telling him it wouldn’t be a race then and makes her way into the maze.

Some time later, Zakuro realizes she’s probably gotten herself lost, but then runs into Amegaki.  He asks her if she’s mad at him and then apologizes just in case he’s done anything to upset her.  She tells him that he hasn’t done anything wrong, but she definitely sounds like she’s upset about something.  Either that, or she’s sulking.  Anyway, they decide to keep going but Amegaki is unusually quiet for some reason.  In an attempt to ease the awkward silence, Zakuro starts talking about how warm it is and casually starts trying to slip her hand out of his, but Amegaki quickly grasps her hand tightly.  Cue me going “D’AWWW!”  It was such a cute moment and the fact that he continued on with how he’s not afraid of her anymore and he feels like they’re more than friends only made it better.  Of course, Zakuro panics and runs off leaving Amegaki stranded in the middle of the maze.  Poor guy…  As Zakuro is fleeing, she’s suddenly surrounded by a wall of light and then disappears. D: 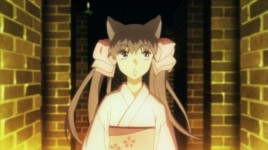 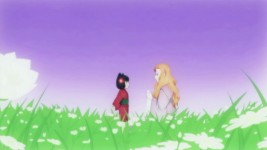 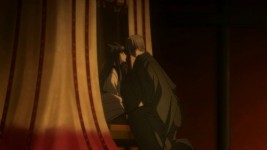 Amegaki exits the maze to find the rest of the group waiting for them.  The kids scold him, telling him that he’s slow and Susukihotaru asks him where Zakuro is.  Amegaki mutters something about how Zakuro hates her now.  As the group heads back to the Ministry, hoping that she’s just returned home, we find where Zakuro is.  Turns out, she’s been spirited away to the same building that the creepy dude in a mask – who’s name turns out to be Omodake – is situated.  She’s been changed into these gorgeous robes that a priestess would wear and she’s shackled to a plush looking bed.  If it weren’t for the unusual surroundings and the shackles, I might be a little bit jealous of her.  She wakes up after a dream where she’s with her mother in a field of flowers, telling her that she loves her more than flowers and candy.  Soon the happy memory is shattered when the same spirits from her previous dreams crowd around her mother and pull her away, leaving Zakuro alone.  Talk about creepy nightmares.  Anywho, down the hall we see the Black Widow (who from now on will be known by her real name, Rangui) heading towards Omodake’s room, and of course her boobs are out for the world to see and she’s hanging all over Omodake.  He tells her to summon Byakuroku since she’ll need someone to assist her, but she’s pretty pissed off about that suggestion.  However, she follows orders and summons the half-spirit.

Byakuroku receives the news from her sister Daidai, but she’s less than enthusiastic about it.  Daidai seems like she’s a bit jealous that Rangui asked for her sister directly, but she doesn’t openly show it to her sister.  Byakuroku approaches Zakuro’s room with Omodake, curious as to why she’s been summoned to assist him of all people.  Zakuro is surprised by her visitors, especially when he removes his creepy ass mask to reveal that he’s really Hanadate.  Talk about head-spinning revalations! D8  He kneels before her, telling her that his family has accursed blood and they were destined to be together and to bear children.  He then leans in to kiss Zakuro, but she pushes him away, afraid to be near him.  He leaves her alone, but tells Byakuroku to update him on how Zakuro is doing.  Meanwhile, at the Ministry of Spirits, Kushimatsu and Lord Amaryoju greet the group before asking where Zakuro is.  Mamezo then appears before falling into a comatose state.  Apparently, when an artifact spirit like Mamezo gets too far away from their master, they fall into a deep sleep.  Considering Mamezo has already done so, they’ve come to the conclusion that Zakuro is at least a day or two’s travel away.

The girls are unsure as to how this happened, but Kushimatsu regretfully comes to the conclusion that Zakuro has been taken to the Village of Oracles, the place where half-spirits are born.  Returning to the Village of Oracles, we find Byakuroku returning to Zakuro’s room to check up on her.  Zakuro pleads for her release, saying that her friends have to be worried sick about her.  Byakuroku starts yelling at Zakuro, telling her that she’s wrong and she’s not that much better than her before she starts hacking a lung out.  She then reveals that using her powers take a toll on her body and Zakuro takes her hand, channeling some of her own power into Byakuroku to help ease her pain.  Feeling better, the girl quickly escapes the room leaving Zakuro alone again.  Omodake is on a balcony with Rangui, who is – as always – hanging all over him, upset about the fact that he’ll soon be wedding and bedding Zakuro instead of her.  Byakuroku arrives, informing Omodake that she has an update for him and he ignores Rangui’s pleas and makes his way towards the girl, sensing Zakuro’s powers.

Upset about this, Rangui goes to Zakuro’s room and attacks her, telling her that she’s nothing to Omodake and how she’ll destroy her for ruining her happiness.  The whole typical scorned woman routine.  She then transforms into her super ugly demonized form and starts destroying the room, breaking Zakuro’s shackles in the process.  Zakuro manages to escape through a hole in the floor and as she’s crawling around in the air ducts, she sees another half-spirit being beaten by a human guard.  Dropping down to save the child, she finds herself face-to-face with Byakuroku again.  Byakuroku informs Zakuro that all half-spirits in the village are considered tools since they are neither human nor spirits.  She adds that the girls have the fortune of looking somewhat human, where boy half-spirits don’t look human at all.  Zakuro then remembers the weird spirits (the ones I thought looked like ash babies from Silent Hill) and it all clicks into place.  She then hears her name being called and looks over to see a huge cell filled with half-spirit children.  Frightened by this, she runs away, Byakuroku calling after her. 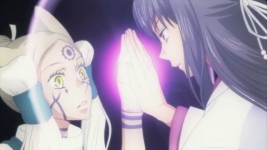 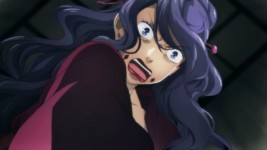 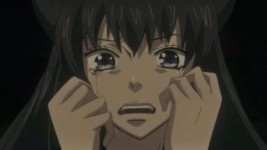 Opinions: HOLY HELL, THIS EPISODE WAS AMAZING!  First the revelation that Amegaki is falling in love with Zakuro (even though he never quite got his confession out) and then the fact that Hanadate really was the big bad guy? D:  Although I’m pleased to say that I was most definitely right about Hanadate.  But the fact that his family has cursed blood and he plans on having children with Zakuro?  That’s one twist I really didn’t see coming.  I’m definitely intrigued as to how her mother comes into play with all of this, as well as how everyone is going to rescue Zakuro.  And how will she react if/when she manages to escape and Omodake resumes his disguise as Hanadate?  I WANT MORE ZAKURO! NAO!