The World God Only Knows 09 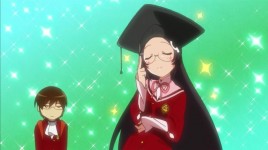 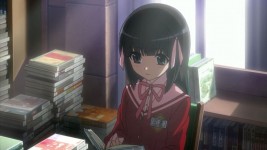 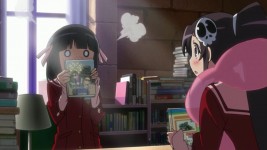 Before we join Keima and Elcie for this week’s shenanigans, we get a look at a librarian’s desk, littered with piles of books.  It’s literally surrounded by towers of books and just before we go to the opening credits, we see a notebook with “I want a library that everyone can enjoy” written in it.  I’m sensing a new conquest approaching!  Anywho, after the opening credits, we see Keima’s house from a distance but we’re able to hear Elcie declare that she baked Keima another cake…and then the house explodes.  Apparently she used too much flour and that caused it to explode and the next day Keima tells her that she’s a moron and doesn’t know anything about the human world.  Elcie is offended and tells him that she went through a ton of training for this position and aced Japanese History.  Keima asks her what the last thing she learned was and after a cute little re-enactment, it’s apparent that the last thing she learned about Japanese history was when America showed up and said “Open your ports, bitch.”  So much for being educated…

After having Keima yell at her and tell her to go to the school library to read up on Japanese history, we find Elcie at this amazing five-story library.  Why couldn’t my school have an awesome library like that?!  T^T  It’s just not fair…  And so she’s browsing…and browsing…and browsing, but then she finally finds a book that catches her interest!  And it’s about fire trucks.  Seriously Elcie?  Fire trucks? *sigh*  I give up.  Anyway, she’s smitten with the idea of fire trucks, so she continues looking for some new books but can’t find anything relating to fire trucks.  A bit deflated, she decides to ask the librarian for help in finding her another book.  We then see a cute girl with short black hair sitting behind the librarian’s desk, but she’s so absorbed in the book she’s reading that she doesn’t even hear Elcie’s question.  Elcie finally gets her attention, but the girl is so flustered by her presence that when Elcie asks if they have any more books on fire trucks, there’s an incredibly awkward silence followed by the girl saying that Elcie should come back after school.  Odd, but okay.  It’s right around this time that Elcie’s loose soul detector goes off.  Yes!  I was right!  We’ve got ourselves another conquest! 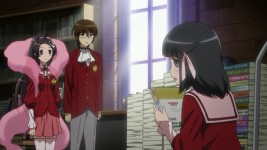 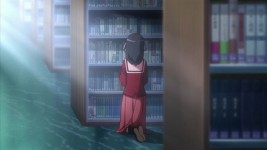 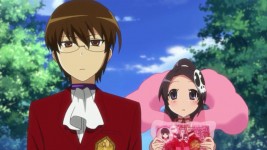 Later that day, Elcie drags Keima with her to the library, informing him that the librarian has a loose soul in her.  Keima seems disinterested since librarians seem to be too overused in the dating sim genre and declares that he’ll only conquer her if she’s “stellar,” whatever that means.  As they’re looking around for her, we see this big ass cart full of books being pushed around by none other than the librarian.  Noticing her, they’re shocked by the amount of books she’s brought them; there’s over 400 of them and every single one mentions fire trucks.  Keima comments on the indexing system of the school, but as we find out via the girl’s inner dialogue – yes, you heard me right: inner dialogue – she’s memorized where every single book in the library is.  That’s…a little creepy and a lot impressive.  Half the time I don’t even remember books I’ve read a year ago! D:  Anywho, she has several moments in an internal debate on whether or not it would be creepy to mention that she found them all based on memory.  Several long moments.  Eventually, Keima becomes disinterested and walks away.

The next day, we find the girl opening up the library and as she’s going around putting books back in their proper place and dusting, along with whatever other opening chores she has, we get to hear a long-winded inner monologue about how great books are.  Books are the ocean, the wind, passion, each book leads to a different world…  We get it!  Books are great and transport us to another planet or realm or whatever, but damn girl!  Ease up a bit!  We then find Keima and Elcie walking along and Elcie has brought up the girl – whose name we now find out is Shiomiya Shiori – and they’re trying to figure out how they’re going to get the loose soul from her.  Keima has no idea how he’s going to get close to her, but he mentions an inviolable rule when it comes to bookish girls: “If you listen closely, you’ll be able to hear her inner dialogue.”  He then pulls out his PFP to give Elcie an example, but she quickly crushes his hopes by telling him that’s now how it works in the real world.

Meanwhile at the library, Shiori is visited by a classmate and possible co-worker, who asks her to do her a favor while she goes to see the faculty about something.  Agreeing, Shiori is given a list of books that the school needs to remove from their collection.  She’s obviously depressed about this, but does the job anyway, worrying about the fate of the books all the while.  Apparently some will go to used bookstores, some to local libraries, but she’s still upset about it.  As she’s grabbing one of the last books she needs, she loses her balance and guess who’s there to catch her!  If you said Keima, you get a cookie! 8D  He not only catches the book, but Shiori as well and now the poor girl is all flustered and doesn’t know what to do.  She has an intense internal debate about saying “thank you” and after about two minutes of listening to her rage internally, she finally ends up saying “thanomics.”  Why?  Because she’s staring at a book about economics while she’s trying to thank him. *facepalm* 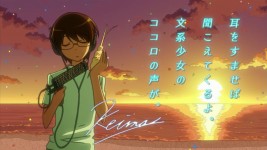 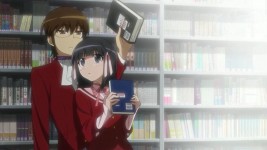 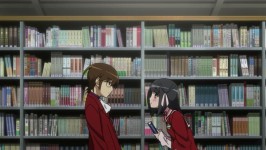 Opinions: While I’m glad that we’re out of the filler episodes and back into the conquests, I’m kinda iffy on this one.  Shiori is cute and it’s adorable that she’s so shy, but I have a feeling that all of this internal dialogue may drive me batty by the end of this conquest.  However, the jury is still out on that decision and I’m kind of excited to see how Keima will manage this curveball.