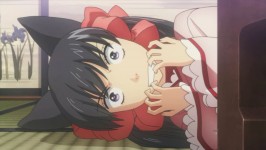 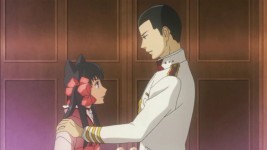 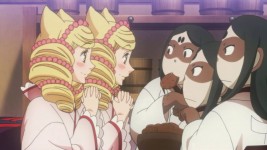 This week was…interesting to say the least.  We delve a bit deeper into the romantic aspect of the pairings we’ve already come to love – okay, at least the ones I’ve come to love – which is a nice twist.  Part of me is happy about this episode because it’s so cute and fluffy, but the other part of me wants to get back into the real plot-line for this show.  But I digress.  It was a cute episode and it made me all warm and fuzzy on the inside.  We join the crew while they’re eating breakfast; Bonbori and Hozuki are ganging up on Ganryuu and feeding him while the others chat idly.  Zakuro decides to finally give milk a go and has one of the most epic reactions I’ve ever seen.  Flailing around and collapsing while declaring that it’s too sweet and that she has a cow running around in her head?  Awesome.  Amegaki tries not to laugh and tells her that he appreciates the thought, but he won’t expect her to drink it ever again if she doesn’t want to.  After her fit is over, Zakuro notices that Riken is missing from the table.  Susukihotaru mentions that he’s talking to Kushimatsu about what happened the previous night.

Kushimatsu thanks Riken for saving Amegaki and Susukihotaru, but tells him that she can’t allow him to disobey orders (i.e. breaking Zakuro out and taking her with.)  Zakuro goes to find Riken, planning on telling Kushimatsu that it was her fault, but he stops her.  He informs her that Kushimatsu let him go with three months reduced pay and that if he were in the military, his punishment would have been much more severe.  While the two are conversing, Amegaki and Susukihotaru are watching from the hallway and decide that it’s not the right time to interrupt them.  Susukihotaru casually asks him if he’s jealous of how much time Zakuro has been spending with Riken, but I really think that she’s starting to get a bit jealous of the attention Riken has been showing Zakuro lately.  We then see the three raccoon ladies (I seriously can never remember their names) wondering aloud in the kitchen about what the deal is with the romantic interests going on between the two “couples.”  Bonbori and Hozuki appear and inform them of a game that human girls have taken a liking to and how it’s supposed to answer your questions about love.  I sense some plotting is about to happen…

Suddenly, Hanadate shows up, which can only mean one thing: it’s mission time! 😀  The group gathers in Kushimatsu’s room and he informs them of a spirit that continues to appear while village girls play the game called Kokkuri and while it hasn’t harmed anyone yet, he wishes to have Spirit Affairs deal with the spirit before anything major happens.  They agree to it and Hanadate excuses himself from the Ministry.  After seeing him off, the group finds a room to set about figuring out how to summon the kokkuri, but soon finds themselves at the mercy of Bonbori, Hozuki, Mitsuogi and her friends.  Zakuro is furious that they had arranged to play this game before they were even given the assignment, but Mitsuogi explains that since there’s so many mixed feelings going on, they only wanted to find out for themselves who had feelings for whom.  After a bit of arguing, they finally manage to summon the kokkuri and Zakuro comments that it’s not really a spirit, but rather the manifestation of young women’s inquiries for love. 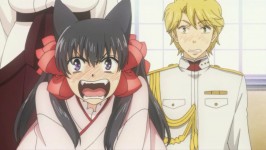 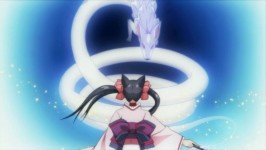 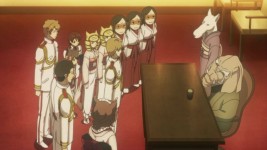 Mitsuogi then sets around to asking some very embarrassing questions (such as “who is the blonde one in love with?”) and they end up having to pin Zakuro to the floor to keep her from interfering.  The kokkuri soon escapes into the courtyard and the gang follows it, only to find that their weapons have no effect on it whatsoever.  The kokkuri flies away, leaving the girls at a loss of what to do, so they return to Kushimatsu’s office to seek guidance.  Hanadate soon returns to the Ministry and apologizes for dragging them into this because he thought it would be an easy case for them.  Lord Amaryoju then proposes that since it is the manifestation of the pleas for love by young women, the best way for them to conquer it would be for it to witness two people falling in love.  Hanadate decides to join the group despite Kushimatsu’s protests that it now falls under their jurisdiction and she can’t ask him to do that.

The group sets off in search of the kokkuri and as Bonbori and Hozuki call out to it, Ganryuu tells them to get behind him.  They look at him like he’s crazy, but he declares that he’ll keep them safe because he’s tired of always being a burden to them.  Somehow the conversation turns to the three of them being in a relationship.  Sometimes I wonder about the twins…  Anyway, Susukihotaru and Riken are in another part of town looking for the kokkuri and Susukihotaru asks Riken what his feelings are because she doesn’t know if she can deal with not knowing anymore.  Riken, being semi-clueless like always, stops at a stand to get her a ginger drink since her face was flushed.  Shockingly, she refuses to take it when he offers it to her.  Maybe she really is jealous after all.  We then find Hanadate, Zakuro and Amegaki making their way around town chatting idly.  Just as Amegaki scolds them for chatting when they should be looking for the kokkuri, three girls run past them, screaming as if they’ve just seen a monster.

Up a ways, the trio spots the kokkuri – who is now very large and rainbow colored – sitting atop a tree.  Amegaki is about to confess his love to Zakuro (whether it’s false or real, we’ll never know) when she stops him because she “can’t bear to hear something like that when it may not even be true.”  The kokkuri goes straight for Hanadate, who very calmly confesses his love for Zakuro, causing the spirit to pause for a moment.  Zakuro confesses that she loves Hanadate too, and that seems to be enough for the spirit, as it floats into the sky before disappearing.  Later that night, we find Zakuro and Susukihotaru sitting outside talking to each other about the kokkuri.  Susukihotaru teases Zakuro about Amegaki and the girl becomes visibly flustered just as Mitsuogi appears, demanding to know once and for all who she likes.  They challenge each other to a fight, but before we’re able to see that, we find Amegaki sulking in his room.  I immediately felt bad for him because even though he knew their confessions were fake, he was still feeling rather glum about it.  He hears screaming and runs downstairs to find not one, but four Zakuro’s fighting against each other (which just confirms my ideas that they were shape-shifters.)

Meanwhile, we find the Black Widow in bed with someone who I’m pretty damn sure is Hanadate.  She starts talking about how his lie was superb and that they’ll get Zakuro eventually.  I’m suddenly very intrigued by this development. 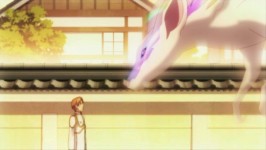 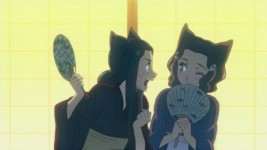 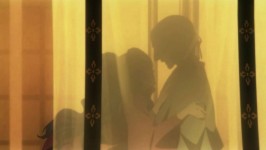 Opinions: Yet another cute, fluffy episode, but with elements of the plot-line, which I liked.  I thought that the interactions between each couple was adorable, especially how jealous Susukihotaru and Amegaki are.  Most of the episode was kinda “meh” for me, although the ending really had me perk up in my seat.  I have this sneaking suspicion that Hanadate is the one behind the mask; look at his hair!  It’s the exact same length and shade of brown! D8<  It’s the eyes.  They’re too cold and calculating.  I’m on to you Hanadate…