The World God Only Knows 08 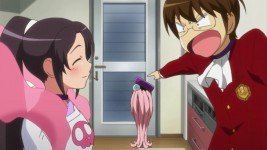 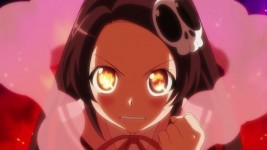 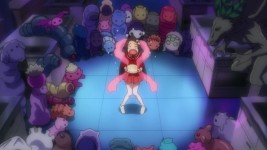 We’re once again taking a quick break from conquering girl’s hearts to visit Keima, Elcie and his mother in their “normal” (define normal for me) day-to-day lives.  First off, we get a glimpse of a smokin’ hot redhead in the shower who I swore was Orihime from Bleach based on the size of her boobs – I seriously thought I had started watching the wrong anime for a minute – but then I realized it’s Keima’s mom.  Hot damn.  Keima’s one lucky bastard.  *ahem*  Anyway, something green, large and rather dragon-ish looking appears outside of her bathroom window, so what does she do?  Throw the window open and shout at the “peeping tom” of course!  Part of me is wondering if the neighbors have ever filed a noise complaint with how loud Keima and his mother are, not to mention all of Elcie’s shenanigans.  Apparently this was just a preview because we now dive head-first into the core of this episode.

As per usual, Keima is screaming about what Elcie has packed him for lunch – this time it’s a rather tentacally thing with eyeballs peeking out of his bento box – and resorts to telling her that she’s just a like that buggy game he had been playing.  Crushed, Elcie continues to cry while at school and is comforted by one of her classmates.  They suggest that Elcie try baking Keima something, since it’s common knowledge that the best way into a man’s heart is through his stomach and hands Elcie the magazine she’s looking at, which happens to have a recipe for a strawberry cake.  Elcie is confused at first, but soon becomes determined to bake it and win over Keima with her abilities of being a chef.  She soon disappears, leaving behind a giant, inflatable – yet oh-so-cute – balloon/bobble-head replica of herself.  Of course, her teacher is completely dense and doesn’t realize that she’s skipped out on class.

Elcie discovers the Home Economics room and is thrilled that there’s a kitchen in the school so that she can prepare her treat for Keima in secrecy.  She begins reading the recipe and as she does, my stomach drops because she pulls out all of these ingredients that she’s brought from Hell.  As she’s mixing the sugar (which is moaning, I might add) together with eggs to create a meringue, one of the eggs begins to hatch.  Something large, green and dragon… AHA!  So that’s where that thing we saw before the opening credits came from!  Elcie quickly runs from the room, continuing to mix her ingredients together while fleeing from the monster and she thankfully manages to escape, but ends up running into Keima.  She quickly makes her exit, informing Keima that he should be prepared to be wow’d by her prowess in the kitchen.  Returning to the Home Ec room, we get a cute little montage of Elcie baking along with one of the most adorable and non-annoying songs I’ve heard.

Just as she’s about to put the finishing touches on her cake, the dragon-thing shows up again and snatches the strawberries from her.  As luck would have it, the heat from the fire that Elcie created in the room in order to bake the cake (yes, she made a fire instead of using an oven) had caused the remaining eggs she brought to hatch, thus releasing the other little monsters.  They surround her, probably in order to try and get the cake, causing her to start panicking.  However, the microwave explodes because you really shouldn’t put a microwave into an open fire.  Despite the monsters being gone, Elcie is devastated to find that the cake she worked so hard on is missing. 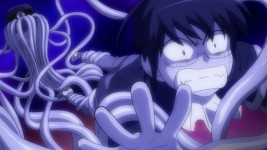 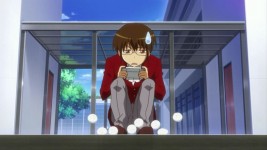 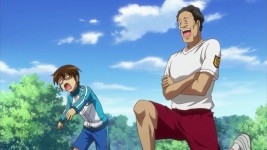 Rewinding to the beginning of the day, we now get to see it through Keima’s eyes.  He’s pondering why his normal, gaming life was disrupted but then he remembered that it was all because Elcie showed up.  Of course!  Blame the cute little demon because you stupidly signed a contract with her boss!  Sometimes he irritates me, but I can understand where he’s coming from.  Fast forward to first period, he’s playing his PFP and studiously ignoring his teacher.  Understandably, the teacher gets rather pissed off and calls Keima out on it, saying that even though he gets 100% on all of his tests, that doesn’t mean that he can slack off and ignore the real world.  Keima disregards his teacher’s comments and returns to his seat, only to watch his teacher yell at inflata-Elcie.  Fortunately, he isn’t fooled by it.

As he’s wandering around the school grounds, wondering where Elcie is, he runs across the “sugar” Elcie was using earlier which is now bouncing along the pavement.  Like before, Elcie appears, tells him to prepare himself and runs off again, leaving Keima utterly confused.  Fast forward to Keima’s PE class and we find that his english teacher is filling in for their normal teacher and starts off by having them run twenty laps around the track.  Unfortunately, Keima doesn’t have much endurance and quickly falls behind the rest of his class.  The teacher whose name I can’t seem to remember tries bargaining with Keima; whoever is the last to finish running laps will have to do twenty more, but if Keima apologizes for his attitude earlier that day, he’ll cut it down to ten laps.  Keima declines his offer and momentarily seems to gain his stamina back, but then passes out.  His teacher then informs him that he’ll be stopping by to speak to his mother after work.  Wonderful…  As he returns home, he finds a half-eaten cake sitting in the bush and he notices that it’s from Elcie thanks to the small note on the cake.  He’s about to go grab the cake, but then acquires a real-time mission for his game and scampers inside, forgetting about the cake.

Now that Keima’s “story” is out of the way, let’s go to…who else?  Keima’s mom!  We find her in the bath (yes, it’s the same scene as it was in the beginning of the episode) and she’s surprised by Mr. Dragon-thing.  Grabbing a towel, she runs out of the bathroom, intent on attacking whoever it was that was peeping inside of her bathroom window.  A small flowerpot is knocked to the ground and she panics, thinking that there’s really an intruder in the house.  Grabbing another flowerpot, she sneaks into the small cafe that’s joined to their house and hears some weird scuffling sounds.  Shouting something, she lunges over the counter and attacks Keima, who was busy stuffing his face full of Elcie’s cake.  Meanwhile, Keima’s english teacher is outside ringing their doorbell and notices something scampering up the side of the house.  It turns out to be the same tentacle-bento that Elcie made earlier that day facing off against Mr. Dragon-thing.  The tentacle-thing ends up eating the other monster before turning his sights on the teacher, who quickly flees.  I’m pretty relieved that Keima didn’t eat that after all, even if he did end up hurting Elcie’s feelings in the process. 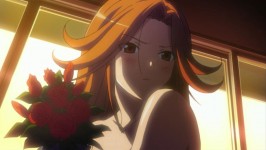 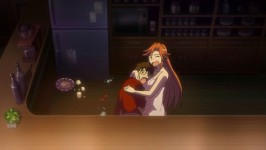 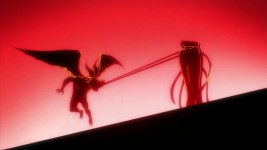 Opinions: This was an adorable episode that had my cute-o-meter on the verge of breaking.  It was also kind of cool to see how the different characters perceived the same events throughout the day.  Unfortunately, despite how cute and quirky this episode was, it didn’t quite grab me as much as the others.  Maybe it was the lack of actual conquests?  Either way, there was tons of Elcie and I loved it.  Especially her escapades in the kitchen. XD