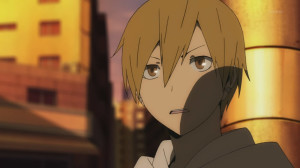 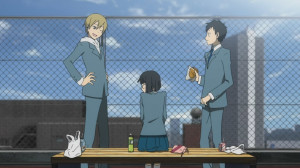 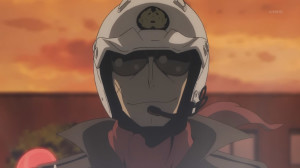 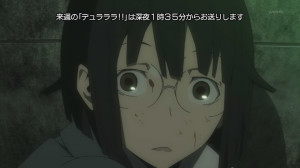 Durarara!! is finally back after a 1 week break, with a brand new spanking OP/ED to boot!  That said, there are quite a few new developments and characters that are setting the stage for the second half of the series. Also, I’ve begun what will probably be my final variation on the format.

So this episode was definitely an interesting one. I like how Simon knows something about Izaya, and I’m quite intrigued to see where they head back in time from. Simon also sort of protected Izaya in a way when he fought with Shizzy. Eitherway, Izaya is definitely still going around planning something. He also has Namie Yagiri acting as a secretary somewhere too.

The new Police officer dude, is a pretty interesting character, and definitely a nice addition to an already strong and large cast of characters. I found it hilarious to have Celty so freaked out by him, and then run crying to Shinra. The jokes about Celty being a monster herself, but being scared just never get old XD. I still find it kinda odd how much she loves Shinra, but  eh, I guess it works.

Another new character was Shinra’s dad, who just came back to Japan. He’s definitely an interesting character too, and I can’t wait to see how Shinra and Celty are gonna feel with the old man being back home XD

The big reveal of the week though, was Anri and her connection to the slasher. The whole black and white vision, the Slasher appearing and the errie music was a very very intense moment brought together with epic voice acting, animation and music. I found it interesting how the Slasher also intruded into Izaya, Celty and Ryugamine’s online chat. The chat itself was pretty entertaining too, especially since it was a lot easy to recognize who each person was.

Quite a few new plot threads have been introduced, I can’t wait to see what comes next! 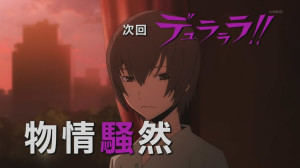 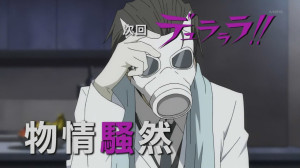 Next episode seems to center around Namie in some way, along with Shinra and Celty interacting with the old man. Next week can’t get here sooner!