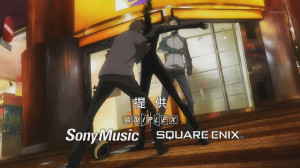 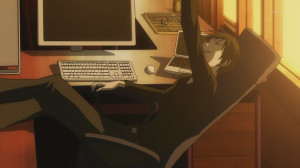 Great conclusion to the arc. In fact, if Durarara!! had followed more in the reigns of Baccano! this might have been a good final series episode, paving way for a Season 2. Of course, the awesome thing is that we still have about 14 more episodes left for this series!

This episode had Celty protect Mikado from the blade that was headed towards his stomach. The resolution of Harima actually not being Selty’s head was a bit of an interesting twist, but I personally felt it killed some of the awe and shock factor of the show. I mean, it would’ve been beyond twisted if Celty’s head HAD been fixed onto that body, and possibly that while the head had some latent, hidden abilities, it still retained all of Harima-san’s memories. Either way, this little resolution just makes Yagiri’s nee-san (big sis) seem like less of a vicious monster.

We also see things develop between Celty and Shinra. I wasn’t expecting them to mend their ways so quickly, but I guess they both have been with one another for a while. It was a nice to see both of them hug and the whole Shinra reading Celty’s mind was… amazing and totally in character to say the least.

Mikado got some major development as well, and has begun evolving into a more likable character. I’m not sure whether he’s the series protagonist, but he’s definitely got a lot of power with the whole Dollars gang, and everyone he has in it. Also the scene with Mikado finally asking Anri out and finding Kida hitting on her was a nice touch, and I wouldn’t have expected the old Mikado to have kicked Kida like he did. I think its kind of sad that Kida is being kept out of the loop of Mikado’s whole gang of the Dollars thing, but I guess Mikado worries in the same way Kida does for him. Of course, Kida probably has some vital information on all the members of the Dollars, especially Izaya. 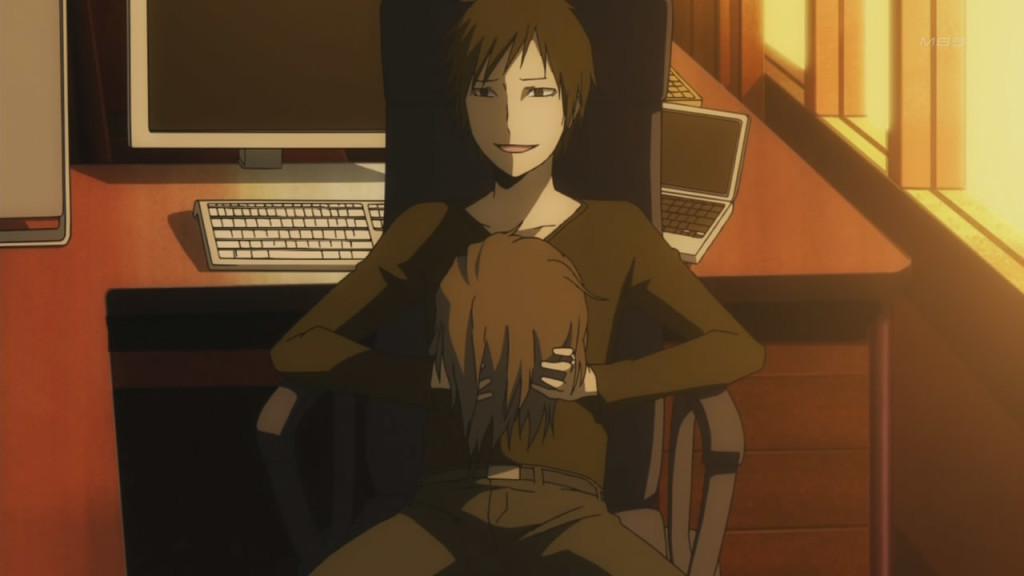 Izaya. Probably my favourite character in the series, and he’s turning out to be the series main antagonist. One thing this show does really well is blur the lines between good and evil. Can you call Izaya evil? No I don’t think so, and that, along with his slightly mad plan to start a war are going to be the crux of the series. At the end of the day, everything revolves around Celty’s head.
This story still has so much potential though. There are so many characters that can interact with one another and make for some really interesting storylines. I cannot wait to see what Durarara!! has planned for its second half. The first half… beyond epic! 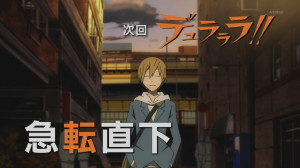 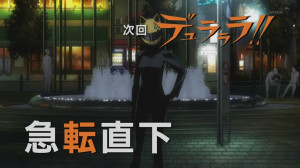 Next episode will most probably be a transition episode towards a few more character driven episodes before we head to the next big arc!