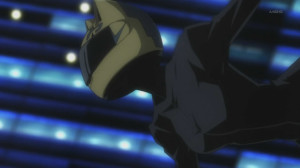 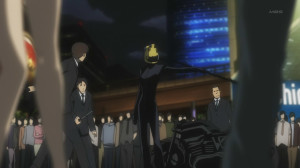 Amazing Episode hands down. This episode delivered on everything that shocked and awed everyone who saw the last episode. Mikado was indeed, the founder of the Dollars, and his whole back story, along with his entire plan, was amazing.

Izaya definitely had a hand in gathering all the members of the dollars, and its quite the interesting experiment for him. Mikado, was, indeed, intensly cool in this episode. His entire backstory about how he formed the Dollars, made a lot of sense and was very in character. I was expecting a split personality or something, but Mikado’s character held true and strong throughout this episode.

The Icing on the cake, is that Mikado isn’t the weak, clumsy bungling idiot he gives himself off to be. Sure, he’s sorta naive, and the typical good guy kid, but he’s also smart, calculating and quick on his head. The whole plan, as well as analyzing what kind of person Seji’s Sister was, just made me go: “Wow” the second I saw it. 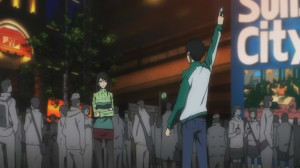 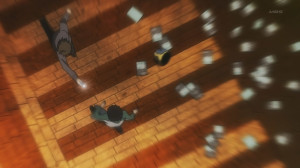 The whole Celty and her head thing was touched on as well, although it took a bit of a backseat to what was happening down below the rooftop. We still don’t exactly know what Selty asked her head. I’m guessing it was, “what is your name?” or something along those lines. I think, Selty has indeed realized, that she doesn’t need her head to exist, or to have purpose in life. I’m curious to know what Mikado wanted from her in return for helping her? Was it just beating down those thugs? I’m hoping not.

I have no idea where this series is going from here, and what new things will happen, but if one thing’s for sure, I’m sold in every aspect of this show. The character? Amazing. The Plot? Mastefully crafted. This is definitely storytelling at its best.

And on a major note, seeing Isaac and Miria cameo in this episode was something any Baccano fan would have squeeled like a little fangirl at. I myself smiled with extreme delight and glee at the scene, as those were definitely my favorite characters from Baccano!

Needless to say, I’m beyond impressed with how the first half of Durarara!! is going. Its not even upto episode 13 yet, and this is a 26 episode series!  The episode ended on quite a cliffhanger, and I look forward to seeing how this arc is resolved! 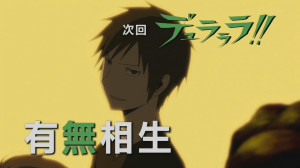 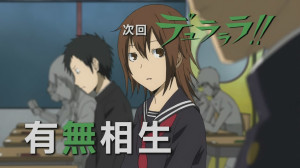 Next episode will probably wrap up this storyline, as well as introduce a ton of new surprises. I can’t wait to see where this series goes from here! =D