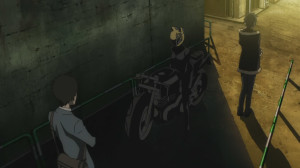 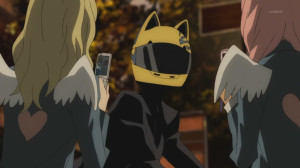 Wow… just… WOW!!! I was expecting something that changed the face of the current status-quo of the show, but what I got was even more shocking than I expected. So it seems Mikado had more of a role in the story and its odd happenings than I expected. The cliffhanger raised quite a few questions, and its still going with the developments we made last episode.

The big glaring question right now, that has superseded all others is: “What’s Mikado’s role in all this?”. Just by the way he confidently said he held “all the cards” and the way he blazed through the keyboard while using his PC, I’m beginning to suspect that Mikado is the so called leader or founder of the Dollars? There’s a lot going against that though. Izaya also thinks something of Mikado, and he has shown genuine interest in the guy before. Izaya definitely knows the answer to the question of who Mikado is.

Mikado met with Selty and this whole meeting was quite nice. I’m super super curious about Mikado now, and I hope the next episode answers the question as to what he is and what he means by: “I just wanted to not live a normal life”. Either way, this was a decent episode, that  came off exceptionally strong with the reveal at the end. 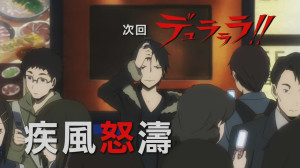 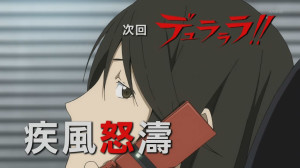 Next episode seems to be another Mikado narrated episode, and dive deeper into the established plot thread of The dollars, Celty, Yagiri Pharmacy, and most importantly Mikado himself. Things are really heating up!