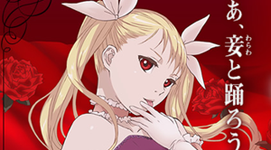 “The announcement last Friday after the airing of the first streamed episode by FUNimation of Dance in the Vampire Bund has caused quite a stir. From Friday afternoon to Monday morning, there were six hundred posts about the topic that covered quite a lot of ground about the edits being done to this newly licensed series, both for the streaming version and the eventual home video DVD and Blu-ray releases of the show that is currently airing in Japan.”

“FUNimation knew what they were getting into with it. Fans know they’re not getting the show as originally presented and they’ll make their decisions off of that. Buying an edited release is the individuals choice and we have zero issue with that, though we do believe that censorship in any form must be spoken out against. What I do recommend is that if you do refuse to buy this show because of the edits, support the company that is releasing this title unedited in its original form by getting the manga. A spike in manga sales will show more than simply not buying the title in DVD/BD form.”

What say you about this manner of censorship?

Discuss this news story on the forum, here.