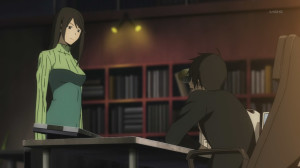 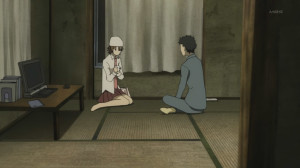 What an amazing episode, hands down. I was not expecting the plot threads and the characters to converge into a major plot issue so early on. So much stuff happened in this one episode, it still has me a bit dizzy. I’m also pumped up for the next episode, which is going to have some really integral plot stuff addressed.

The one thing that continues to impress me about Durarara!! is the show’s fearless nature of going into whatever question its posed and whatever plot threads its made. There’s still more with every episode, more questions, but we get answers to the last ones.The tightly packed nature of the plot so far, makes me think this is a 13 episode series. It isn’t, of course, and thats what makes me really excited and intrigued. The show just keeps getting stronger and giving and giving. Story telling and masterful plot planning is at the pinnacle here!

That said, we learned all about what happened to Selty’s head, how it got connected to Anri’s friend’s body, how messed by Seji and his sister are, and we got to see the meeting of Celty and her head. For a minute there, I was expecting Selty to not even go as far as she did. What makes everything so much more interesting is how Ryugamine just got caught right in the middle of all of this. There’s also Izaya, who is enjoying the show and being intrigued. It was also nice to see Shizou equate Izaya and Seiji as similar people. Shizzy senses? XD (Sorry, couldn’t resist that one)

The questions about Izaya keep getting more and more interesting. Why does he keep referring to the inhabitants of the city as humans? Is he another surreal creature like Celty? Or is he just a human with a complex? I don’t know, and I really want to know. I’m also glad that Mikado/Ryugamine is being brought more into the surreal, dark side of Ikebukoro, something Kida desperately wanted him not to be a part of. All in all, great build, and I hope the next episode delivers much like this show has so far. I cannot wait to see what happens next! Everyone has seen Mikado, so he’ll be everyone’s target next episode. XD 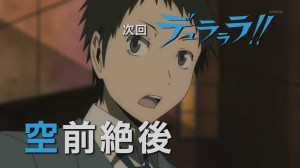 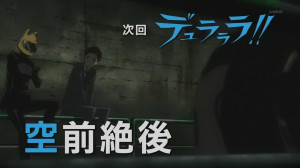 Next episode will have Mikado running into Celty, have Dotachin around his school, and Celty’s head will probably escape. After that? Your guess is as good as mine. Next week needs to get here… NOW! NOW DARNIT! >_>