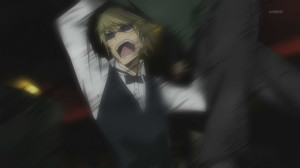 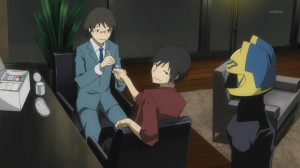 Well that was a bit disappointing in the sense that we rarely got to learn anything more about Izaya and his motivation for whatever is going on. The episode itself was pretty much centered around Shizou and why he is the way he is. The story was pretty entertaining, and it establishes that Izaya, Shinra, Selty and Shizou know each other. All of them except Celty/Selty pretty much went to the same high school.

Shizou’s backstory was pretty interesting, and half of it was due the narration he did. It seemed like a self relfection, and gave the episode that extra philosophical feel that nearly every episode possesses. Also interesting to note, was that this episode did not follow the whole: “Start at the middle and work your way back” approach for telling the story.

All in all a solid episode, that does tell you quite a bit about the characters and their connections.  There are still SOME unanswered questions, like how Dotachin knows Shizou, or what exactly Izaya is doing, or even if he’s a good guy or a villain. The main over-reaching story still has plenty of questions. Since we’re only on episode 7 of 24, I guess we’ve got plenty of time to get those answers. 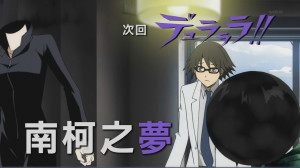 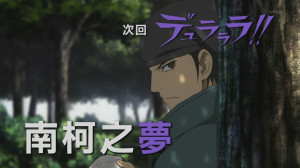 Next episode seems like it’ll focus on Celty and the Otakus, as well as add a bit of Anri and Ryugamine scenes. We’ll see what direction the story takes from here. I’m kinda blank on the guessing thing for next week. XD