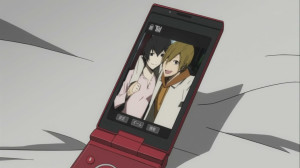 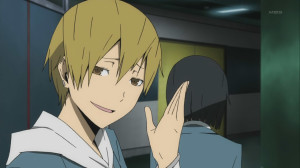 We finally get a Kida centered episode, and it definitely doesn’t disappoint.  I think if there’s one thing this show is doing really well, its building up a sense of mystery and intrigue around its characters. With each week, and each part I get to know, I can’t help but feel more wonder and excitement. The story always entangles itself as far as the episode goes, but there’s also a much slower feel of reveal in the grand scheme of things.

Kida’s background is indeed, one of the things I’m extremely curious about. What happened between him and Izaya? And how does it all relate to the girl who’s apparently hospitalized? I’m guessing she was probably his girlfriend and got caught in the crossfire of some scheme of Izaya’s.

Kida doesn’t seem to be too much of a push over either, and I am pretty sure he was ready to take on those guys in the alley. Seems like every character except for Ryugamine and Anri are extraordinary, and that’s not really a bad thing.

They also introduced another new character and urban legend, the slasher. Her little battle with Celty SCREAMED guilty gear to me XD. I’m guessing its the girl who’s laying in her bed. Its interesting that the person can throw Celty off balance, which is good because there needs to be someone who counterbalances celty.

All in all very solid episode!

No preview because the next episode was blogged at the same time as this one!