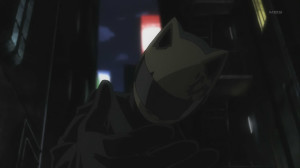 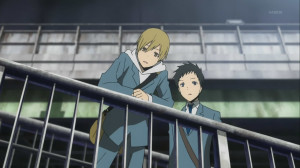 The Episode opens up with Kida and Ryugamine’s opening ceremony. We’re introduced to a few more characters, most of which are they’re classmates. Miss Magenta, who’s actual name is Kamichikawa, is also in the class. And thus, we are taken back to the night before, where she apparently should have died.

It is here that we find out about Kamichikawa’s background, and the fact that her father was having an affair. Obviously distressed by it, she confides in an online friend. As time progresses, her distress gets worse, and finally she and her online friend (Nakura-san) decide to die together. The story is known from there on, as when Magenta heads to the meeting point, she is captured by thugs and then rescued by the Black Biker. The Black Biker is actually a “deliveryman” and delivers Kamichikawa to a building where someone is waiting for her. She finally meets Nakura-san, who turns out to be Orihara Izaya, the Informant.

He makes her realize how feeble her feelings for suicide were, and reveals that he sent both the thugs and the Biker to her. All because he wanted to see her expression and because he found humans interesting. He smiles, and then leaves her ontop of the building. With the words of her close friend turning out to be a lie, it seems to be the last straw for Kamichikawa. She jumps off the building. In Midair, she is caught by some shadow like web. It seems the Biker is still around, and saves her.

When asked why she saved, the Biker responds via text on her phone: “The world isn’t as cruel as you make it out to be“, and then leaves. Taking these words to heart, Kamichikawa heads home, and decides to move on with her life. 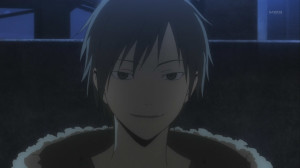 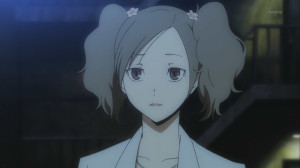 Wow… I was so not expecting the second episode to surprise me on so many levels! Comparisons to Baccano! are natural for me, since I’ve seen and loved that show, and the same author and animation studio are doing this show. The second episode does well to establish a different and more unique identity for itself. This show is definitely a lot more dark, deep and based on the current state of Japan and its society, and its got a good dose of interesting, yet realistic characters.

Most of the episode centered around the whole Biker and Kamichikawa thing, which was pretty good. A good chunk of the early parts of the episode were nothing more than a recap, but it was nice seeing it from the other side of it, and seeing what actually happened as the boys were passing by. Kamichikawa’s story was pretty interesting too, and the whole plan that Orihara made to see how she’d react was a bit interesting, if not pointless. The logic he had made a lot of sense, and I guess he derived some enjoyment from it.

The biker was shown to be a sympathetic, morally good person. The fact that she came from some apartment, suggests that she’s not one of the other characters, as I previously assumed. That said, a few other characters were introduced as well. The blond waiter dude, and that glasses chick Anri, not to mention that love obsessed Yagri (I guess this from the OP). They look intriguing, and I’m quite interested to see their particular, probably interconnecting stories. The first arc was pretty nice. 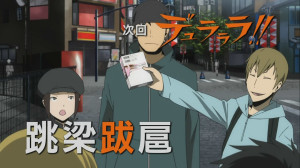 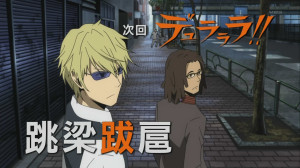 Looks like next episode is going to be about the boys hanging with the Otakus. We’ll also be looking more at The Blonde waiter dude and Orihara and co on the other side of the story I assume. I think there’s also going to be some development in the Anri, Kida and Ryugamine trio story as well. I can’t wait =D