Demons, a flaming haired girl with a katana, a love triangle and some nice action are among some of the things you’ll find in JC Staff‘s latest work, Shakugan No Shana. 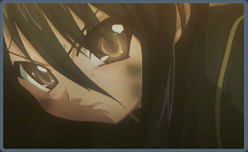 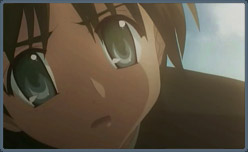 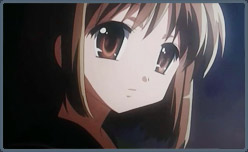 Shakugan No Shana is based on the manga of the same name and tells the tale of Sakai Yuji and Shana. Yuji is a normal high school kid, living life in the same boring manner as everyone his age does. One day he’s walking to school with one of his classmates when suddenly the world around him changes color to a horrible tint of red and purple. Everyone is frozen, except for him and a Monster callled a “Guze” that starts devouring everyone. Suddenly to save the day there appears a flame haired girl in a coat ,wielding a Katana. She takes down the monster effortlessly, and from that point onward, Yuji’s life takes a very eventful turn for better or worse.

He finds out that there are people around him who have small flames emanating from within them. There are the “Torches”, people who’ve already been devoured, and who have a copy of their memories and personality until they fade away. These Torches serve as replacements for the actual person so that the sudden removal of that person doesn’t upset the balance of existence.

In it’s essence, Shakugan No Shana is a hybrid of the high school romance and action genres of anime. The great thing about this anime is the very fact that it handles this mix of two rather different genre quite well. There’s the Guze and their attempts to ruin the life of the inhabitants of the city for their own evil goals, there’s Shana and Yuji and their conflicting views on the value of a Torch, the ensuing love triangles that form around Yuji, Shana and their friends at school, and the rivalary [rivalry]between Magery Daw and Shana are all great examples of how much interesting stuff is jam packed into this neat, 24 episode series.

The plot is very well thought out. From the opening episode where Yuji is introduced to the unknown horrors around him and Shana, to the part where they end up risking their lives to save the entire city, the anime is just well done. There’s the whole “save the world” from evil thing, coupled with well done confrontations, battles and events, and side by side there’s the “shoujou” anime love-love story in there as well. Ike, Yoshida and the other supporting characters may not play a very important role in the action side of this show, but the normal “relationships” and school issues part of the anime that revolves around them is just as nice.

Both action and romance are used to a light extent. There’s not too much of either, and it’s to be noted that if this anime had focused on either one, it wouldn’t have been half as good.

Of course, the story is not without it’s flaws. There’s the fact that the anime does not take itself seriously, and very wisely so. Except for some emotional events that happen in the first episode, there’s really not many “serious” events in the story. The villains come, they’re beaten, and at the end of the day, life resumes back to normal. There aren’t any huge developments in the standing of how the characters are relationship-wise either, and at the end of the day, it’s just good clean fun. Shakugan is a light hearted attempt at meshing action with romance, and this can be a good thing or a bad thing, depending on your preferrence. If deep and complex stories are your thing, then you might considering passing up on this one. 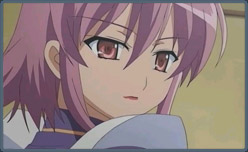 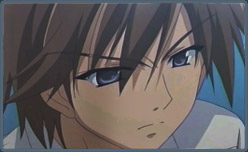 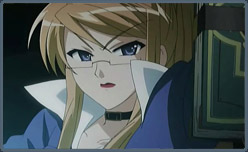 Shana’s plot doesn’t have a lot of big twists or turns either. The plot can be considered simplistic, but it’s not always predictable. It’s just simple and clean, complimenting the overall “not too overly serious” path the anime treads.

There’s also Shana herself, who can be viewed as annoying by some. She’s the typical, bossy, dominating girl who’s stronger than the main male protagonist. The male protagonist is the one taking the back seat. He’s more of the nice guy who’s smart and tactical but can’t fight much at all. Again, some may really find this annoying, others may love it.

Speaking of characters, Shakugan no Shana has a very impressive cast of both unique, and generic characters in it. Unique or generic, each has a great deal of depth to him or her. Everyone from the people in Yuji and Shana’s school, to the numerous Guze No Tama they face, everyone is just very well thought out. From the Guze obsessed with his self created doll, to the incestuous twins to Ike and Yoshida, everyone just really adds spice and flavour to the overall package. And thankfully the number of cast members isn’t overwhelmingly high.

The art in Shana, is typical JC Staff style stuff. Big shinny eyes, simplistic figures and not too overly detailed, the art is good but not amazing. Character designs are kept simple, and have a “cutsey” feel to them. Again, this may have something to do with that non serious approach the anime takes, but at the end of the day, it’s more of a pro than a con. The art style is unique and contributes a lot to the feel of the anime. On the flip side, the backgrounds, and locales where the anime takes place in are nothing short of exemplary. Everything, from the bridge area, to the top of the sky scrapers is drawn exceedingly well.

The animation stands side by side with the art, and is done amazingly. The fight scenes are nice and have a good flow to them. The effects used for the attacks, the torches, and everything else from blasts to Shana’s fiery hair’s glow are pretty diverse and look just great. Props to JC staff for a job well done.

Of course, half the job of an anime is the music and sound. The OST is pretty nice, featuring tracks that contribute a feel of mystery and extremely cheery moments, and is pretty fitting to the anime’s general feel. While the OST isn’t something you’ll be listening to once the show is over, it’s still serves it’s purpose quite well. The voice overs are pretty well done, especially Shana’s grumpy voice, and Yuji’s dazed, surprised expressions. 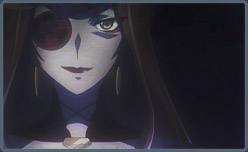 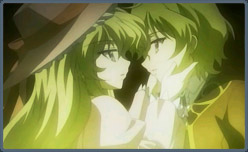 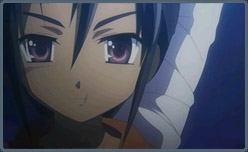 Overall, Shakugan No Shana’s a nice, neat and fun experience. It’s something that one should watch for a nice lighthearted entertaining time. The characters and the mix of action and romance are some of the great things of this show, and if you’re open to stuff that isn’t too over the top in terms of seriousness, then this is definitely for you. It’s not perfect, and it’s not something that EVERYONE will love, but it’s still great stuff none the less. We award it with a A Grade.