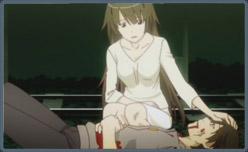 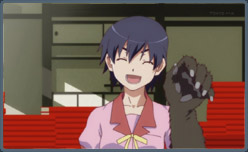 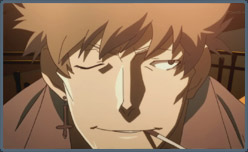 This episode picks up from last week’s ending. Senjogahara comes after Araragi to give him the money he forget to take from her (To give to Oshino). Araragi keeps quiet about the whole attack and just says that he crashed because he was on his bike while talking on the phone. Senjogahara is suspicious and lets it go, giving him a service until he “can get up again”. A really nice girlfriend indeed XD

Being the do gooder that he is, Araragi decides to take Sanbaru to see Oshino and get her cured. There’s some odd talk about sporty girls and Exhibitionism along the way too XD

When they show Oshino the arm, he says that it is not a monkey’s paw but in fact a devil’s arm. The Devil’s arm grants wishes in exchange for one’s soul. That closes up the episode.

This was a bit of a slow episode. It just more or less confirms whatever we found out in the last episode. The whole talk about Exhibitionism and sporty girls wasn’t really as entertaining as some of the other more roundabout conversations we’ve seen in the show. I did like Araragi’s reply to the question Sanbaru asked, that no one could replace Senjogahara. Call me odd, but I dig the anime’s rather odd couple XD

Still no real preview. I don’t really know what to say about the quiz babble that we’re treated to in every episode XD