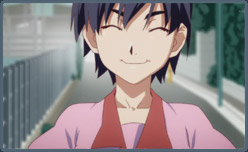 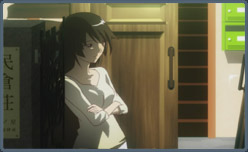 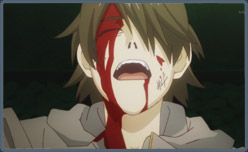 Alright, so with the second over in the last episode, we start on the third arc and subsequent third girl. Quite a few things are apparent in this episode. Araragi is now dating Senjogahara, much to my delight. Hachikuji is now just a wandering ghost who runs into Araragi every now and then. Of course, Araragi can’t really catch a break from the “oddities” that are a part of his life.

The new girl we’re introduced to in this episode is the ace of his high school’s Basket Ball team, Kanbaru Suruga. So we’ve had the Tsundere, we’ve had the shy megane (Glasses) girl, the loli and now we have the sporty girl. Of course… Unlike the previous three, I really didn’t see anything unique or interesting about the new character. She’s just a typical nice girl, a bit of dramatization maybe, but that’s about it.

We do get to see some “couple time” between Araragi and Senjogahara, and as expected, it’s a bit awkward (with Senjogahara almost killing Araragi once XD). They make plans to live with each other after high school is over too, but in their own twisted way.

Araragi does mention Kanbaru though and finds out about her and Senjogahara’s past. He then leaves his girlfriend’s place and calls Hanekawa for additional information while he heads home. As he heading home, he is attacked brutally by someone in a rain coat with a red arm. After receieving quite the pounding, Araragi collapses on the train tracks.

When he comes to, Senjogahara is standing on top of him and he says: “Yo Long time no see!”, closing the episode.

I can say that this arc seems interesting enough. I do like the fact that they’re actually keeping all the characters they’ve introduced so far in the mix of things. Too many anime of this type simply forget about the characters after their stories are settled.

I also have to say that the animation for the scene where Araragi is senseless pounded and beaten up was quite superb.

Not much of a preview, more of just a filler to get the Voice Actresses of Araragi’s sisters to actually be able to DO something this episode. I guess we’ll know more about the arc next episode.

revious episodes due to the whole “mystery feel” going away, but it was still a nice, GOOD episode. I can’t wait to see where it goes from here.