Based on the popular Manga of the same name, Inuyasha tells the tale of a half demon named Inuyasha who is on a quest to obtain the Sacred Jewel shard of the Four Souls and become a full fledge demon. On his quest however, he falls for the guardian priestess of the Jewel, And during an attempt to steal the jewel, he is shot down and sealed onto a tree by his loved one. Confused, Inuyasha succumbs to a deep sleep, only to be awoken by Kagome 50 years later. 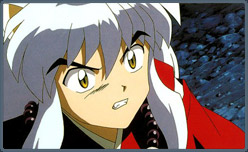 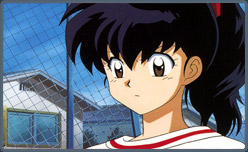 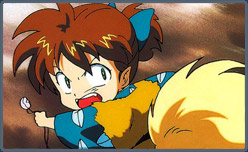 Kagome, a 15-year-old girl with an average life, stumbles into Inuyasha’s Feudal era of Japan, when she falls into a well that her family care takes along with a sacred shrine. Hunted by demons, Kagome turns out to have the Jewel shard that Inuyasha died for 50 years ago. In one of the many demon raids, the Jewel is shattered into pieces and scattered throughout the country. Now Kagome and Inuyasha must work together to retrieve the Jewel shards and prevent any disaster from happening. Along the way they encounter interesting people who become their ultimate allies, and a new enemy that may well be their greatest foe.

Long and cheesy introduction aside, the first thing that really comes to mind when you lay eyes on this anime, is undoubtedly the main character himself, Inuyasha. Inuyasha essentially looks like a human, with claws and yep… Dog-ears. Although he looks more of like a cat then a half dog demon, essentially that’s what he’s supposed to be (Don’t look at me, who knows what goes inside these anime people’s heads). Make no mistake however, Inuyasha may look horribly cute and disgusting on first glance, but the anime is far from what it appears to be. Looks can be deceiving (overused quotation in motion), and Inuyasha does a great job of deceiving itself.

Plot wise, Inuyasha is very well done. Taking a cheesy and somewhat unoriginal start, the anime really does entice you in even its most introductory episodes. Unlike most anime, Inuyasha’s main plot points are well defined from the start. Nothing seems out of place, there are positively no plot holes and everything seems to be well planned from the start. Nothing remains unanswered in Inuyasha, nor is it confusing or chaotic like some animes we know… (*Cough* Lain *Cough*).

A flaw with the storyline however is…that throughout the whole series there is no progression in the storyline apart from the introduction of some characters and side characters. All the way through the 167 episode series, you’re still where you started, the bad guys are alive, the good guys are too, and the conflict is still going on.

Inuyasha also features a superb roaster of main characters that are all unique and very memorable. No character seems out of place or useless, rather each has or her role in the battles and the main plotline itself. May it be the perverted yet confident young monk Miroku, or the beautiful demon slayer Sango, each character will serve to delight and attach you to the anime. While the main characters are well laid out, the villains are mostly not as devious or evil as one would find them to be. There is one dominant villain in the whole anime, and he plays his role with great perfectionism. The various other demons that Inuyasha and friends encounter during their journey are not so memorable, but extremely annoying. A fat sage with the power to shrink people down to miniature size and then use them as fertilizer for a demon tree, A demon that uses hair and turns into wire like threads against her enemies or the demon that uses it’s poison as a weapon are some examples of the rather unimpressive characters in the story. 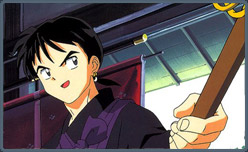 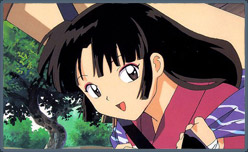 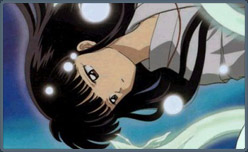 Besides the main characters and villains, Inuyasha also hosts two dominant side characters that tend to intrigue the viewer. One of them is Sesshomaru the elder brother of Inuyasha and the other is Koga, wolf demon. Both of which, have their own plots that tie in with Inuyasha and his friend’s adventures. The characters are more then just a distraction and the way they develop can sometimes be more interesting then the main story itself. The result is exciting run-ins with Inuyasha and company and these segments of the anime can be quite entertaining.

The animation is well done, but it’s recycled quite a bit. Some of the sword swipes and strikes that Inuyasha does are essentially the same scenes repeated over and over again. The battles themselves aren’t always that breath taking as the ones found in Naruto or Dragon Ball Z. Fortunately, the various dialogue and story that drives these battles saves the anime here.

There isn’t much difference of variety in most battles, and the various main characters only have a few set of moves. This makes the combat scenes repetitive, and although that does’nt hinder the anime’s experience, it does make sure that none of the fights are memorable. Another flaw in the anime is the constant escaping of virtually all the main villains.

No bad character, or good character dies, and after each fight segment, it’s back to square one. The good guys are alive, the bad guys are alive, and both are wondering how their next confrontation will be. This also makes the anime lose some of its emotional feel. Fortunately, Inuyasha has a defense to that as well, and that is done by the way the characters emotions are constantly played with by the series main villain Naroku. The love triangle between The love triangle between the first dead and now revived priestess Kikyo, Inuyasha and Kagome leads to some rather interesting bits in the story line that are very emotional.

Although Inuyasha is a serious anime with a serious plot, that doesn’t stop it from including some much needed comedy to lighten the mood. The comedy is well executed and doesn’t ruin the feel of the anime. Most of the time you’ll be laughing your head off from Kagome and Inuyasha’s constant arguments and fights, or Miruko’s perverted ways of dealing with women. This, pretty much completes the anime.

What Inuyasha does suffer from however, is unbalanced episodes. Some of them are exceptionally good and some are quite annoying. What is interesting, is that there’s an important plot point in each episode, and that definitely makes you watch every one of them. None of them are completely useless, but they do tend to irritate. This flaw and coupled with the fact that some of the episode time is always wasted in a recap of the main story so far is agitating. While this is a good thing for newcomers who suddenly jump into the anime from the middle, it can be quite annoying for those who follow the anime from the start. 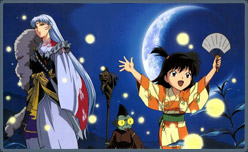 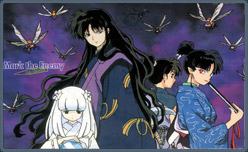 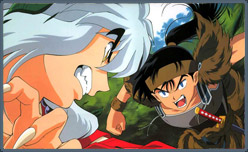 The ultimate flaw of this series however, is that it doesn’t complete the story. Although the Dub is just 69 episodes so far, the Japanese version is long finished. Now what’s so annoying about this is the fact that the Manga and the storyline aren’t finished yet. So Ultimately, the series ends in one of the later chapters of a still on going Manga. What does Inuyasha ultimately become? Well instead of completing itself as a spectacular series, it ends up just being a speedy introduction to the Inuyasha Manga, and a way for people to enter that very fantasy world.

Overall, Inuyasha is a great anime series, with little flaws and extremely strong points that a great anime needs, however the ending is really really weak (and non-existant… ). The series doesn’t complete and finish the story, and this will prove to be a great disappointment for those who are drawn into it. Inuyasha is definitely worth experiencing if you can get over an unfinished story.