Ghost in the Shell is to anime, what the Mona Lisa is to renaissance painting – the stunning, awe-inspiring pinnacle of human achievement. This is a true masterpiece in every sense. To be asked to review the revered GITS is to ask one to critically analyse The Last Supper. A task that cannot be equalled. Therefore, before this mission: impossible is undertaken, a moment must be spared to pay homage to this time-less franchise – long may it continue to dazzle us. 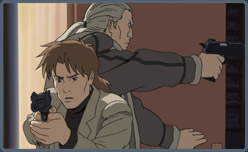 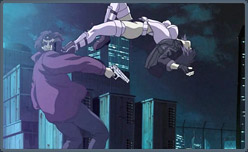 Ghost in the Shell began as a manga by the legendary Masamune Shirow. It is said, that this single person has so influenced modern day popular science fiction culture, that it is impossible to look around a mall, watch a few hours of TV, play a little video game, read action/adventure comics without coming across his footprints. Indeed, the more one looks, the more you are apt to find his marks. It is indeed astonishing, how much popular culture is indebted to this one gentleman from Kobe*. The popular Matrix trilogy draws heavily from the original Ghost in the Shell movie and its directors have cited Mr. Shirow as one of their inspirations.

The cinematic version of GITS is unique as it departs considerably from the manga, all the while being supervised by the creator himself. Whilst the manga is less serious and the philosophical undertones buried deep, the first movie was dark, angst-y and without mirth. Shirow’s philosophy was thrown up, and the characters rendered graver. Although it broke much ground and stunned audiences around the world, something lacked – Shirow was not finished talking. Seven years later, enter Stand Alone Complex.

“It is a time when even if the nets were to guide all consciousness that had been converted to photons and electrons toward coalescing, stand alone individuals have not yet been converted into data to the extent that they can form unique components of a larger complex.”
A.D. 2030

Thus it begins. The series is not related to the timeline of the movies, it runs parallel to it. This review encompasses both seasons of Stand Alone Complex and is based upon the original Japanese version, fan-subbed by Anime-One, Anime-Junkies, and the 2nd GiG courtesy of Laughing Man Fan-subs group.

SAC is first and foremost a police drama, revolving around an elite special forces unit of the Public Safety division, called Section 9, consisting of the very best professionals under the command of Maj. Motoko Kusanagi. The series is divided into the Stand Alone episodes, which begin and end a separate arc in one episode and the Complex episodes, which build upon the Laughing Man case.
The 2nd GiG continues this division, with Stand Alone episodes, that elaborate upon the unanswered questions from the 1st GiG along with a few episodes which reveal the characters’ back stories and a few which continue to explore the show’s philosophical themes. The Complex episodes tackle a new threat, a secret terrorist organisation called the Particularist Eleven.

The main underlying social theme is about the increasingly indistinct line between man and machine. To accentuate this, we have the humans – speedily discarding the organic in search of efficiency and accuracy, the poorest vying for cybernetic body parts and the well funded transferring their consciousness into more and more advanced models, having long discarded organic form.

In the midst we have people like Togusa, hopelessly clinging to organics, afraid to lose their soul. This is off-set by the Tachikomas, Section 9’s sentient tanks whose advanced AI seeks to emulate human intelligence as far as possible. Their silly, chirpy chatter is steeped in depth and feeling. This is a world where the boundaries are disappearing. In their quest for perfection, people seem to be losing the very essence of themselves. Shirow asks the difficult question: What makes one human? At what point do we attain a ‘ghost’?

The Laughing Man arc is just as stirring and provoking and quite complex. There are allusions to The Catcher in the Rye throughout. The Laughing Man logo is circled by the quote from the novel: “I thought what I’d do was, I’d pretend I was one of those deaf-mutes”. In the novel, the character Holden finds himself frustrated by the pretentiousness and falsity of those around him, a motif echoed in GITS. The series is peppered with subtle references to the novel. The homage to J.D Salinger does not end there. He appears again in the Stand Alone episode: “Runaway Tachikoma”, with a reference to his short story – ‘The Secret Goldfish’. The quaintly innocent theme in this episode is powerful in its message.

The 2nd GiG is not devoid of literary and cultural allusions either or less complicated. The author of the essay Particularist Eleven which serves as the main antagonists’ bible, Patrick Sylvestre, is loosely based on the Japanese author Mishima Yukio. There are references to Kafka and homage to popular movies, including The Matrix, an episode reminiscent of Taxi-cab as well as tributes to Ocean’s Eleven, Entrapment, and the anime Cat’s Eye. Suffice to say, the story leaves nothing to be desired. 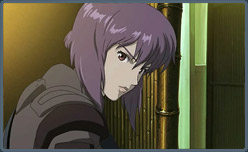 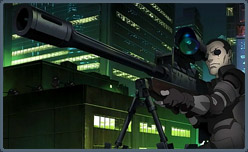 A thrilling story, grippingly paced and very intense, the tension built up in the Complex episodes is relieved by the slower paced Stand Alone episodes, some of which are almost idyllic.

Shirow’s works are unique also because of the strong, iron-willed female lead. GITS is no different. Motoko is respected, feared and indeed loved by her team. Other characters include Batou, a former ranger, formidable yet sensitive; Togusa, a family man and deeply ethical ex-cop, the only one with a family life and no prosthetic body; Ishikawa – who scours the net for background information; Borma – the explosives expert; Saitou, a sniper of repute and finally Pazu, a quiet, composed, introverted chain-smoker with a past shrouded in mystery. At the head of them all, is Aramaki, the shrewd bureaucrat who oversees the organisation.

The characters complement the mood of the show very aptly. There is none of the usual slapstick, silly, wide-eyed anime fare. The personalities are very realistically portrayed, these are tough veterans, but have feelings and emotions.

Motoko, Batou and Togusa constitute the primary cast, with the others rendering support roles. In 1st GiG, not much is told about their backgrounds but this is rectified in the 2nd GiG, with each of the team getting a snoop into their past. On the character front, GITS does not fail, another A+.

The visual aspect of the show is just as brilliant. The 1st GiG being older, is less refined than the polished graphics of the 2nd GiG. Beautiful backgrounds, sweeping landscapes and spectacular seascapes are abundant. Indoors, the attention to detail is just as exquisite. The effects of light and shade, the visual interface of an ‘active dive’ into the network, thrill and excite the eye-candy connoisseur. An A.

The genius of Yoko Kanno is behind the soundtrack and it is nothing short of delightful. The Opening Themes Inner Universe and Rise and the ending themes Lithium Flower and Living inside the Shell are very good indeed. Other tracks are equally impressive. Be Human is a wonderfully stirring and evocative track. Run Rabbit Junk is one of the early action themes, a fast paced, blood-pumping number. This is Yoko Kanno at her very best. One of those rare soundtracks that make for good, addictive listening, independent of the show. A+

In conclusion, there is little to nitpick about this show and there are no flaws to point out as such. There is nothing that one can put their finger at and say: this should not have been there, or this has been missed out. It is a 52 episode rollercoaster ride that finishes too soon.

However, there are a few points which the viewer should bear in mind. There is little of the goofy comedy which is typical of anime. The Tachikomas do provide some comic relief but nothing uproariously hilarious. Some people may find the characters too rigid and the overall mood too grim. Also this is science-fiction, which is not everybody’s cup of tea, and such people should make appropriate allowances for themselves. 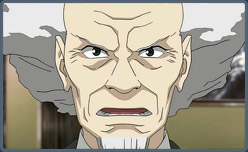 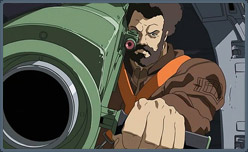 The plot is very convoluted and complex, the story full of little nuances, which makes this a heavy anime to watch. People unfamiliar with the literary allusions might find all the references going way over their head, others would not welcome an anime encroaching upon that territory. This is not a work for the casual watcher. Those whose cup of tea is straight-talking action may find themselves waiting too long.

Those who like a bit of romantic-comedy will find themselves short-changed. The show is meant to appeal to a matured audience. An enduring favourite of Anime Otakus around the world, it may be little too hardcore for those looking for something light-hearted. That aside, it gets a definite recommendation.