Elfen Lied is one of those anime that you can either love or not think too much about. It was good but not out of this world. Possibly its crowning glory is its ideal length – 13 episodes, with one OVA special, it kept the pace quick and gripping, not allowing itself to drag. This review is based on the original Japanese version, fansubbed by ‘Anime-Fin’. 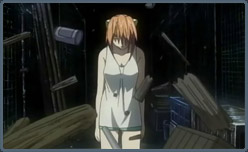 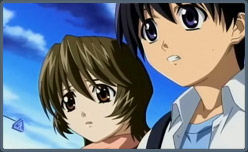 The story is entertaining, unravels at a very good pace and is gripping and compelling, with very dark, mature underlying themes. It draws on child molestation, bullying and the yearning for acceptance and love. Sometimes sad and pathetic, sometimes chilling, and sometimes goofy. At the centre are the diclonius. Mysterious mutant children born with horns on their head and telekinetic vectors. Some are less powerful than others, and a few like Lucy, very powerful. They seem not to have the same moral compunctions as humans toward killing, and if allowed to run amok unbridled might be our undoing. Consequently, a top-secret organisation undertakes the task to collect a few specimens to study and cull the remainder.

Fast forward a few years, and the anime opens with Lucy escaping her containment facility, ripping limbs off security forces and disappearing into the city.

She is discovered on the shore by two college students, Kouta and his cousin, who take her in. Lucy however, is no longer the ruthless killer we first encountered, somehow, her personality has undergone a complete transformation. A goofy well-meaning girl quaint in her unworldliness, she knows no words except ‘nyuu’ which is what she comes to be called. 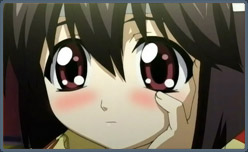 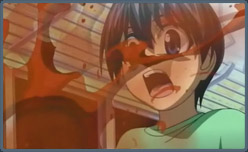 Personally I found the comedic aspect of it quite tiresome, if it had not been for the goofy slapstick element, the series would have impressed me more. A few plot-holes are encountered, but do not detract from the show’s over-all appeal. It is a short series, and some questions are meant to be left open-ended. A good story, which breaks no grounds and yet makes for an entertaining anime.

The character of Lucy/Nyuu is the most developed and explored among the whole cast. Her intriguing relationship with Kouta and the love triangle which subsequently takes birth drives the emotional aspect of the story forward. The rest of the characters are not bad nor compelling enough to be remembered long after the last episode has run its course. Indeed, I found the second diclonius quite irrating.The backstory is revealed through a series of flashbacks and builds up well to the finale, adding flesh to the rest of the characters, earns a C+.

This is one of this show’s highlights – the art and the animation. A lot of gore, a lot of blood and only the one odd episode without any nudity. This show is not one for the weak hearted or the very young. It is meant strictly for mature audiences who have put their squeamishness behind them. That aside, the backgrounds and cast are very poshly drawn, and the animation is as good as can be expected – fluid, sharp and exciting. The opening credits artwork deserves a notable mention. If you are worried about the nudity, it is very skillfully incorporated and somehow does not seem odd. Contrary to a popular misconception, Elfen Lied is not hentai, but ecchi. Earns a rare A. 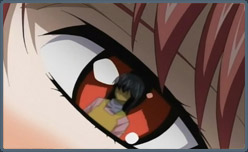 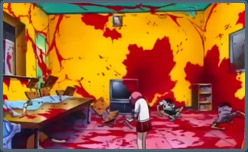 The opening theme is one of the best encountered thus far, with the exception of Ghost in the Shell : Stand Alone Complex. It is a haunting, stirring hymn inspired from the biblical, called Lilium. It is based upon a catholic chant of the same name. Performed entirely in Latin, it was very unusual and fitting. The Lilium theme also features repeatedly through the flashbacks. The rest of the soundtrack is also good. It sets the right mood and invokes the right emotional response but would not earn any awards. It gets a B+.

As submitted in the beginning, this is a good anime. It was very entertaining to watch, given the gripping, fast-paced story. However, it is not one of those shows which lingers on, giving something for the mind to mull over. It is slick and tidy but lacks ‘greatness’. At only 14 episodes, it is a tidy, compact package and gets a recommendation.