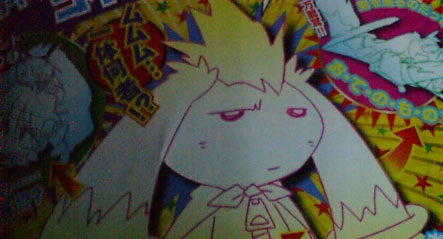 In a follow up the previous post (and only because I don’t want to edit the SAME post twice), there’s some new tidbits of Slayers revolution:

To add to the coolness (or to be more honest… creepyness) the mascot character that puts Mario, Sonic, Pikachu and Kero to shame, has been properly unveiled. It is apparently called “Pocota” and get this… It can cast a DRAON SLAVE with the… What the… with the Sword of Light?!?!?! I’m all for hype and stuff, but this Pocota thing is getting ridiculous…

Oh and, Pocota-sama is said to be appearing in the MANGA. So maybe we won’t see him in the anime this July?