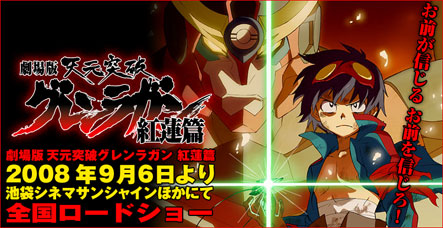 In case you haven’t heard (*gasp*), Tengen Toppa Gurren Lagann, one of the few anime on Anime Evo to get a perfect Grade of A+, is getting a series of film remakes.

Is Gainax milking the series? Most definitely. How good it turns out though, remains to be seen. Personally, I hope they sorta edit the ending of the series, and make it match the starting scene of the series. That way, it’ll end the way I thought the story was going to end. I realize that the previous two sentences would have made little sense to anyone who hasn’t seen the series (*gasp*)…

For those of you actually interested in seeing a preview of what’s to come, the Movie’s official site is live, coupled with a Video promo to boot. Of course, good luck getting through the Japanese Registration for the site XD